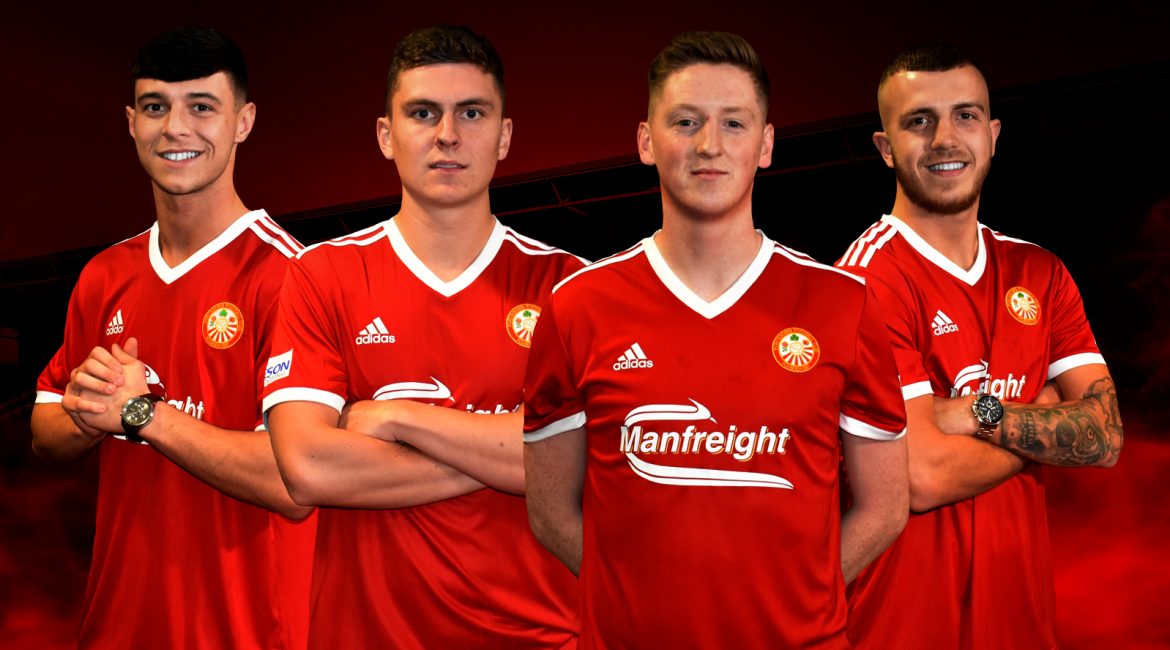 Ports manager, Matthew Tipton, has been busy reshaping his first team playing squad and has snapped up 4 signings in one with Conall McGrandles, Christopher Crane, Brendan Glakin and Stephen Teggart all joining the Ports.

McGrandles joins from Warrenpoint Town where he played 20 times in the Premier League last season and is a combative, energetic central midfielder who can also play in central defense. Tipton had the following to say on capturing 25 year old McGrandles, “Conall McGrandles comes in from Warrenpoint & is a player I know really well from my time there. Conall is predominantly a central midfielder but has played numerous times at centre back in the Premier League. At 24 Conall is now coming into the prime of his career & had great experience both in the Premier League and also the Championship. His composure on the ball will complement the all action style of our other midfield players.”

Crane signs for the Ports from Ballyclare Comrades where he solidified the left back slot playing 27 times in the league last season. Having come up through the youth ranks of Linfield and Cliftonville he made his move into senior football last season with Ballyclare and impressed everyone who seen him play including Ports manger Tipton who was keen to sign him as soon as he got the opportunity, “Cricky is a left back who I feel will add defensive stability to our squad with great pace & quality on the ball. He fits perfectly into our model of a player at 20 years old but with good experience of playing a full season in the Championship & showed me during our meetings that has the passion and desire to be successful with us.”

Glakin comes to Portadown from St James Swifts where he has a prolific season in Intermediate football scoring over 30 goals in the league, the 20 year old striker who came up through the youth ranks at Linfield before moving to Oldham Athletic, comes with the reputation of a pacey, deadly finisher and Tipton will be looking him to make the step up to the Championship this season. Tippy remarked, “Brendy Glakin comes to us after a prolific season playing for St James Swifts. I’ve known Brendy for a long time and watched his career with interest as he went from Linfield to Oldham as a 16 year old. With my links to Oldham it was easy for me to keep my eye on him & he has a successful time with them before deciding to come home 18 months ago. After a spell with St James Swifts Brendy now wants to push his career on and I feel he will offer us something different with his pace & natural goal scoring ability.”

Teggart joins the Ports from Newry City AFC where he was an ever present in their midfield playing 31 times in the Premier League. His combativeness and high energy will fit in well at Shamrock Park. When asked about signing Teggart, Tipton said, “Stephen is a player I’ve been after over 2 years sing he was at Banbridge Town and I’m delighted to finally get his signature. Stephen is an attacking midfielder & offers us another dimension to our squad with his natural fitness and willingness to get beyond our front players and into the box. At 21 & with 5 years experience of playing senior football at Championship 2 & Premier League football he is nearly the perfect model of what we look for in a player in terms of age & experience.”