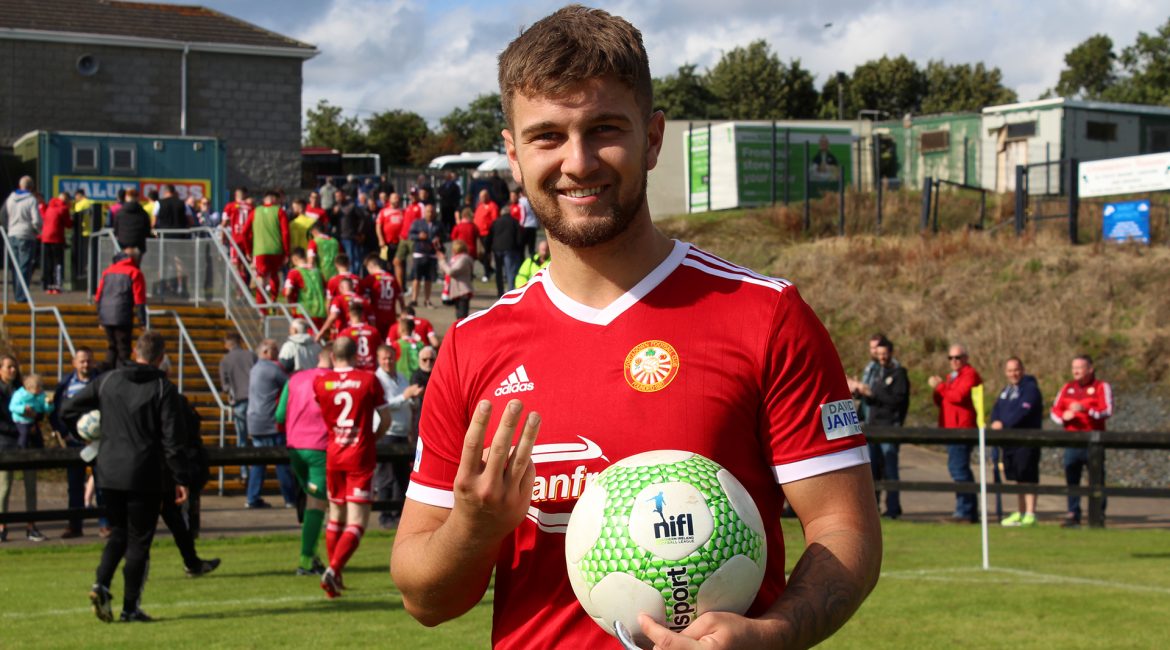 Portadown responded in the best possible way to last Saturdays reverse to Ballinamallard United with a comprehensive and emphatic 5-0 victory over Knockbreda on Saturday (17 August) at Breda Park in the Bluefin Sport Championship.

Ports manager Matthew Tipton made four changes from the eleven that started against Ballinamallard United with Adam McCallum, George Tipton, Conall McGrandles & Lee Bonis all coming in to make their first starts of the campaign with Tipton, McGrandles and Bonis all arguably the pick of the bunch on the day and certainly staking their claims for a place in Tipton’s starting eleven going forward.

It was Knockbreda who started the brightest with first Alex Pomeroy cutting across the edge of the Ports box before getting a shot away which forced Ports number one Edwards into a low save before Brendan Bennett had Edwards at full stretch to make a flying save to tip over a shot from distance.

Portadown’s first chance of the game came via Adam Salley after he was played in by a smart ball by midfielder Stephen Teggart however Salley flashed his shot wide of the ‘Breda left hand post from just inside the box, a chance that Ports were almost left to rue as minutes later Knockbreda missed a gilt-edged chance to take the lead when the unmarked Anthony Burns somehow managed to send his close range header wide of the Ports left hand post following a cross from Pomeroy.

Ports were to take the lead after 24 minutes when Tipton played a short corner to Ports left back Crane and his cross was flicked home in the box by Adam Salley to grab his first goal of the 2019/20 campaign. Salley didn’t have long to wait to grab his and the Ports second when on 34 minutes Knockbreda defender Dylan Whiteway failed to deal with a Stephen Teggart cross into the box and Adam Salley was on hand to capitalise and smash the ball home from close range.

At this stage Portadown had clicked into gear and were dominant and went close to adding a third when captain Luke Wilson went on a marauding run, beating four Knockbreda players in the process, to take him into the box however the ‘Breda keeper was out quickly to narrow the angle and block Wilson’s shot and turn it away  for a corner.

Ports started the second half as they ended the first and Lee Bonis should really have put the Ports out of sight however he blazed over from close range with the goal at his mercy after good work and vision by Conall McGrandles to pick out the unmarked Bonis in the box, however Bonis was not to be deterred as he grabbed his first goal for the club and the Ports third just after the hour mark when he got in front of the defender to slide in and stab home a low cross from the impressive Salley.

Ports were to make it four from the penalty spot on 67 minutes when Adam Salley was brought down in the box by ‘Breda captain Gary Spence following a great run from the half way line, Salley stepped up to slot home the resulting penalty into the bottom left hand corner to grab his hat trick and put Portadown out of sight.

It was to be five for the Ports on 72 minutes when captain Luke Wilson was on hand to head home a George Tipton corner, Tipton continuing his impressive pre season form by adding another assist to his name.

Portadown went close in the final minutes to adding to their tally through substitutes Brendan Glackin and Liam McKenna, with Glackin seeing his low shot deflected just wide of the post and McKenna rattling the ‘Breda bar from inside the box however it was to remain at 5-0, a clinical and professional performance from Matthew Tipton’s men and one that they’ll be looking to carry forward to this Saturdays clash with H&W Welders at Shamrock Park.