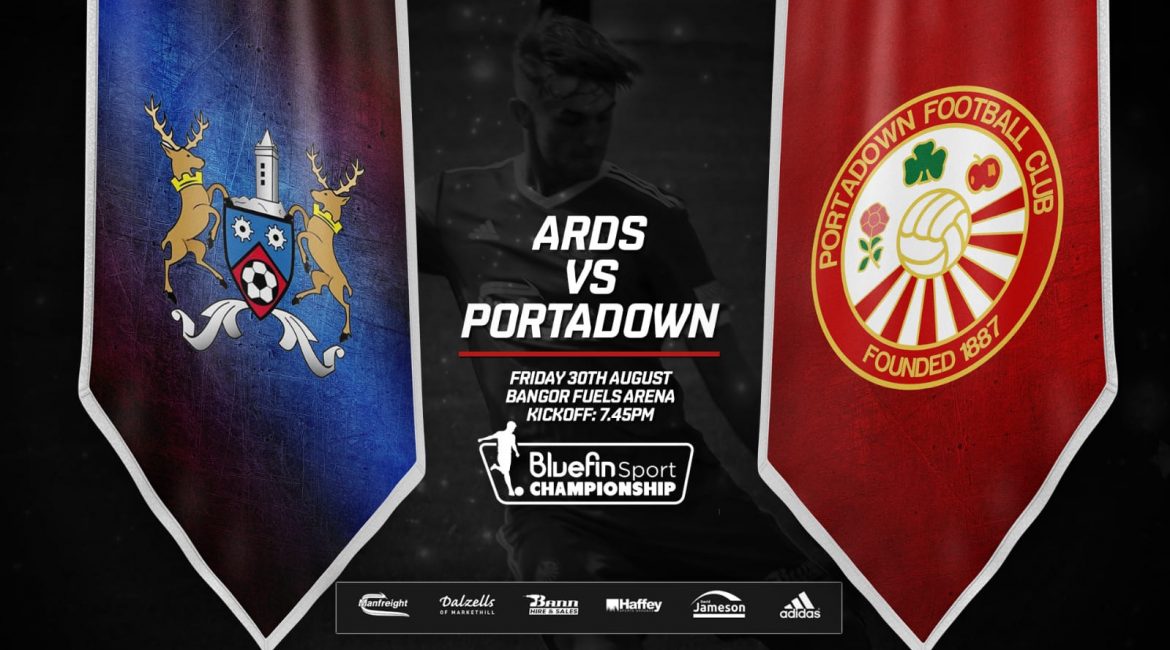 After the let down and disappointment of our 2-1 reverse to Dollingstown in the Bet McLean League Cup on Tuesday evening we travel to the Bangor Fuels Arena to face Ards on Matchday 6 of the 2019/20 Bluefin Sport Championship this evening  (Fri 30th August) with a 7:45pm kick off, both teams go into the fixture with an identical league record after the first five games.

Ports manager Matthew Tipton was rightly scathing about Tuesday evenings performance and will almost certainly look to make wholesale changes with Paddy McNally, Christopher Crane, Marty Bradley, Chris Lavery, Adam Salley, Lee Bonis and Stephen Teggart knocking on the door of a return to the starting XI after not starting in the League Cup exit to Dollingstown.

Ards come into the game on the back of their own Bet McLean League Cup exit to lower league opposition after losing out 4-2 to Limavady United on Tuesday evening and will also look to make changes to the XI that started that game with former Ports striker Michael McLellan as well as Brian Neeson, TJ Murray, David McAllister, Dylan Wilson, Scott McMillan, Jaimie McGovern and William Armstrong all expected to return.

Ards have had a mixed start to their Bluefin Sport Championship campaign following their relegation last season from the Dankse Bank Premiership. After winning their first opening two league fixtures against the PSNI and H&W Welders they only have one victory in their last three, a 1-0 win over Knockbreda with a last minute goal from striker Michael McLellan, prior to that they lost 3-0 to Newry City AFC at the Bangor Fuels Arena followed by a 1-1 draw away to Ballinamallard United.

The Portadown defence will have to keep an eye on former striker Michael McLellan who has hit 3 goals in his opening five Bluefin Sport Championship games however there will be no reunion with former Ports left back Jerry Thompson who joined Ards in June following his release from Portadown after Ards confirmed today that Thompson had been released after just two months with Warren Feeney’s men.

Portadown will be looking to continue their impressive league defensive form which has seen them only concede once in their opening five Bluefin Sport Championship fixtures, the Ports strikers too will also want to continue their fine form which has seen Aaron Duke, Adam Salley & Lee Bonis share seven of the Ports 12 League goals so far this term.

Incidentally it was a defeat against Ards at the Bangor Fuels Arena back in April 2017 that saw the Ports relegated from the Danske Bank Premiership, a game that saw young Ports striker Callum Ferris become the youngest ever scorer in the top flight of the Irish League at 15 years & 287 days.

Another eye catching stat is that there has been four red cards in the last five fixtures between the sides, something that neither manager will want to see continue tonight.