Ports Around The World – Barry Magill 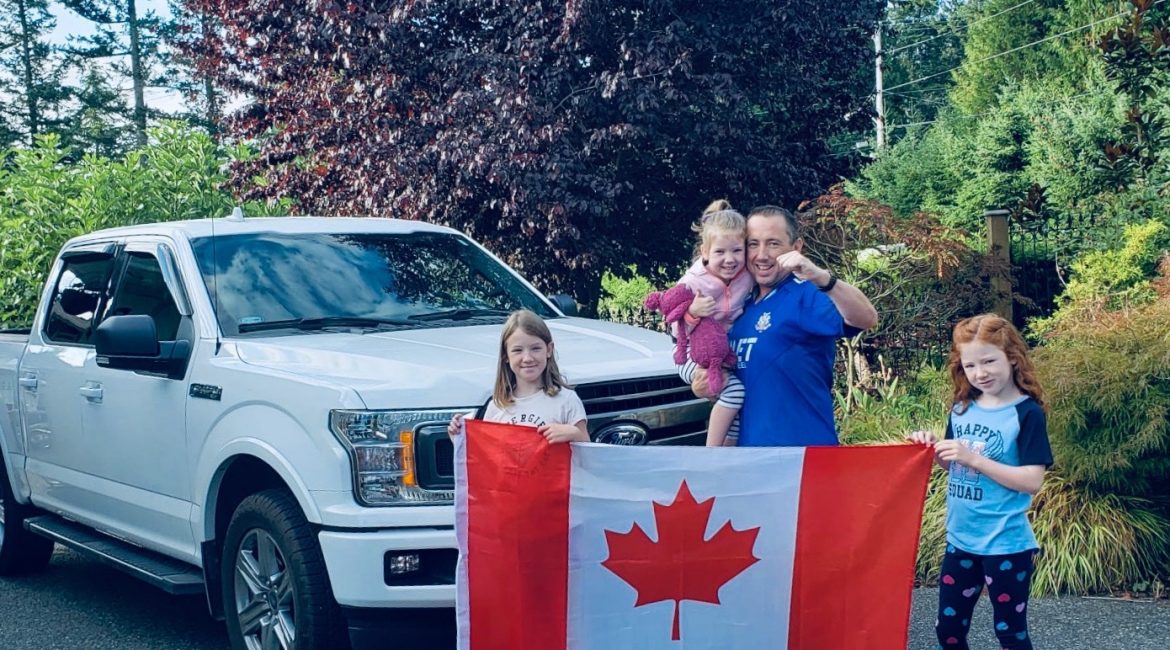 In the first in our series of ‘Ports Around The World’ we interviewed well known Portadown supporter Barry Magill.

Now in his late 40s, Barry lives with his wife and three children on Vancouver Island, as far west in Canada as you can get.

‘I left Portadown 16 years ago and after working hard in London for 13 years we have spent the last three here in Canada where my wife is from. It’s an awesome place to live and a great place to bring up children. Life is pretty busy with work and raising kids and they are all into their sports including football (or soccer, which I refuse to call it!).

Barry grew up in the Annagh area of Portadown where his father was a player and one of the founders of Annagh United, the club even being formed in his childhood living room. Still a fanatical Portadown supporter, Barry often spots his father in the We Are Ports TV highlight reels or goal clips during matches, his brothers are also Portadown supporters with some attending Shamrock Park regularly with their children. 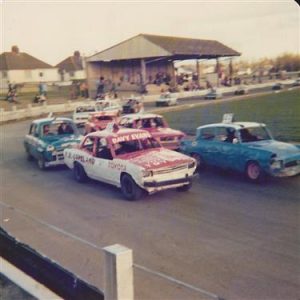 Barry’s own early memories of Shamrock Park are of watching stock car races on a Saturday and his brother Errol was a 1988 European Stock Car champion, a trophy he secured on the old Shamrock Park track.

‘When I was young I used to get into Ports matches for free at half time. After the final whistle was blown, I would hide somewhere inside the ground until the place had been locked up. A short while after that, the stock car guys would arrive to set up for the evening. I would then leave through the turnstiles and get a little ticket to re-admit me back into the ground later and head home for my tea. After I’d eaten my fill I would run back up to Shamrock Park to watch the racing for the rest of the night!’

During the Terry Kingon era was when Barry really got into watching Portadown properly. His first away match was the 85 Ulster Cup semi-final at the Oval where we defeated Linfield 3-1 on a lovely August evening.

‘It was a great night, there was a huge crowd, plenty of singing, a bit of aggro and beating Linfield was special too’.

The rest of that season wasn’t great on the pitch but that didn’t really matter to Barry as he had been bitten by the bug of following Portadown.

It wasn’t too many seasons before Ronnie McFall came along and Barry told us how it could all have been very different if he and his mates had been more successful with their powers of persuasion.

‘When Rectory Rangers had just been formed, we would have been hanging around and watching them train, it was shortly after big Ronnie had left Glentoran. One night we were kicking around the estate and we knew that he and Anne were temporarily living with his mother close by, so I drew the short straw and was duly pushed up the garden path to knock the door and ask him if he would manage Rectory. Fair play to McFall as he at least listened to me and chatted before politely declining our invitation. Two weeks later he became the Portadown manager and the rest is history’.

Apart from the obvious highlights of following the Ports through the nineties and early two thousands, we asked Barry if there were any moments that really stood out for him as being memorable. 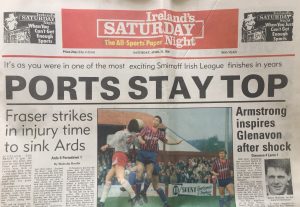 ‘In 1990 we were fighting with Glenavon to win the league and the penultimate match of the season was away to Ards at their old Castlereagh Road ground. We threw everything at them, hitting the woodwork a couple of times and Alan Fettis in the Ards goal was also having the game of his life. The match dragged on into injury time and we didn’t look like getting the decisive goal. Then, all I remember is wee Greg swung in a corner, the ball hits off Davy Mills and drops at Sandy Fraser’s boot … bang!, pandemonium. Without that moment, we wouldn’t have gone on to clinch our first league title the following week and who knows, would maybe not have had all of the success that came after”. 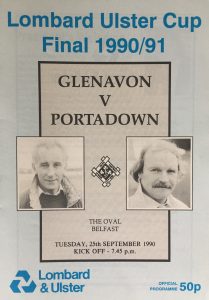 Irish Cup final between the Mid-Ulster rivals later on that season.

‘Joey Cunningham scored an amazing solo goal and Philly Major was sent off before the game went into penalties. Mickey Keenan scored one of our penalties and Gary Blackledge sent his high into the East Belfast night sky to give Portadown the win. It was a brilliant occasion at the Oval winning our first ever cup final against Glenavon. The celebrations were unbelievable!’

The old shed at Shamrock was somewhere that a lot of supporters remember having great fun at matches. There was always a large crowd of supporters huddled together under the roof and this gave great opportunity for plenty of singing and shenanigans. Barry recounts the last game at Shamrock Park before the turn of the millennium. 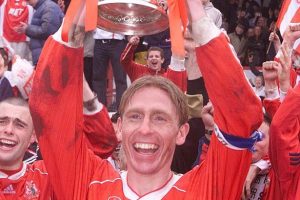 unexpected victorious league campaign in 2001/02 is another memorable day that stands out for Barry.

Despite being based on the other side of the world these days, Barry’s love and passion for the Ports has not waned at all. Bursting out in song around the house from time to time, his daughters are now well versed in his favourite terrace chants and tunes. He misses watching Portadown a lot (especially the big match away days) and just like the rest of us, his weekend is made or broken depending on the result of the match on a Saturday.

‘The trouble is here, with the time difference, I’ve got eight hours extra to either savour it or sulk about it!’

Thinking of people who he misses watching matches with, Barry’s mind turns to wee Gowser, ‘I miss hearing his banter, he was an absolute machine of one liners that gave us all a great laugh’.

Being part of the group of supporters that founded the Premier Reds supporters back in the day, Micky Moore is another person who is not far from Barry’s mind when he thinks about Portadown FC.

‘I was really shocked to hear about Micky’s death. I have great memories of him, he was constantly there the whole time I’ve followed Portadown. The last time I saw him was at the 2015 cup final before we emigrated’.

Although not able to attend many matches now, Barry feels that being a member of ‘We Are Ports’ and also the club’s social media presence has helped him to still feel part of the football club.

‘It’s great to see fans being brought closer to the inner workings of the club through the We Are Ports scheme and getting regular updates by email and WhatsApp is brilliant for me. All of the social media stuff and match highlights are amazing too, especially when you live far away. Everything comes across as so professional, the camera angles and the goal celebration gifs for example. I think I’m always the first to watch the match on the You Tube channel as I sit and keep hitting refresh until the highlights drop!’

We really enjoyed reminiscing with Barry and hope to see him back watching Portadown as soon as he can.

‘It won’t be this year but maybe next season or the one after I’ll get home for a while and hopefully see the Ports back in the top division’.