Bobby’s Blog – “The only easy day was yesterday – all our focus is now on Newry.”

“We’ve started off November on the right foot – 3 points & a clean sheet.

Now we have the most important game of the season coming up Friday night – the next one.

Last week’s result was a good one to build upon and create momentum through the upcoming swing of matches. We had good spells throughout the match in which we truly played the style of football we aspire to play. Our players are becoming more comfortable with their individual roles within the formation and the responsibilities that come with them.

Callum Ferris, last week’s Man of the Match, has found a rhythm that saw him produce 2 goals and the second week in a row finding the back of the net. It’s extremely rewarding for me to see the hard work & effort he has put forth over the last 4 months be reflected in 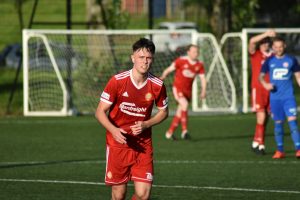 the success he has experienced as of late.  There was a spell of matches in which he wasn’t seeing as much time as he would like – but that’s football. During these times, it’s easy to become frustrated and discouraged, allowing yourself to drop in form. Callum reacted to these times as a model professional, pushing harder at training and making a case for why he should be in the squad day in and day out. 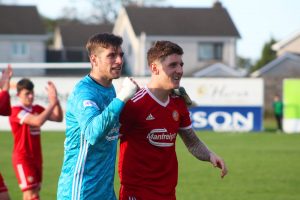 Our match against Knockbreda also saw the return of October’s Player of the Month, centre-back Paddy McNally, who was sidelined in the prior week’s fixture due to injury. An anchor of our backline, Paddy has made my job much easier throughout the course of the season through constant communication & organization. He continually sets the tone in all training sessions & games and provides our young squad with an experienced presence.

Last week’s match was a good result, but I don’t quite think it was a complete 90 minute performance. In this league, we don’t have the luxury of taking dips in form at any point of the game. From start to finish, we have to be able to inflict our footballing ability on our 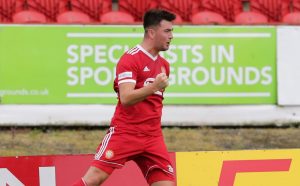 opponents. There were some great moments throughout the course of the game – even our big striker Aaron Duke threading through balls as if he was a centre-mid. We continue to build upon our good portions and learn from our mistakes to get closer to the full 90 minute performance we seek each week.

I hope to see all of you Friday night as we travel south to take on Newry City under the lights.

The only easy day was yesterday – all our focus is now on Newry.