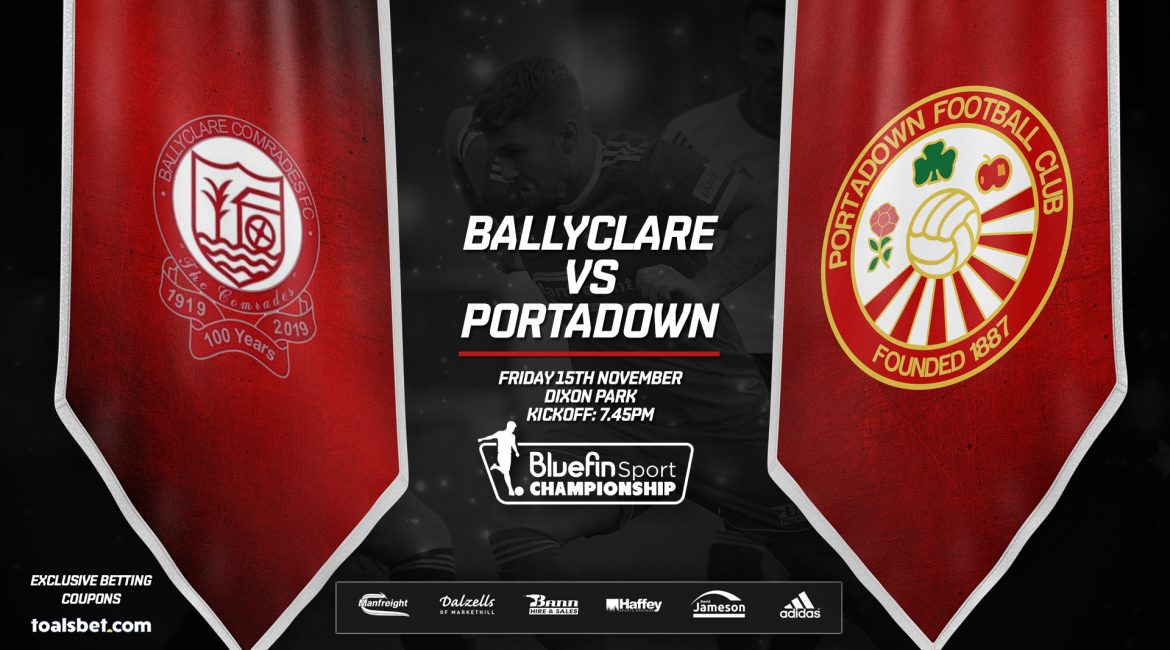 Portadown are back in Bluefin Sport Championship action this Friday night (15 November 19) when we face Ballyclare Comrades at Dixon Park (7:45pm).

In injury news Ports boss Matthew Tipton has informed the media team that Adam McCallum has stepped up his rehab but is still a little bit away of even being able to do straight line running while Poggy Robinson is still in a walking boot to aid his recovery from broken ankle. Chris Lavery played 45 minutes on Tuesday night in a bounce game against Armagh City and suffered no reaction with the medical team keen to increase his load now with another game on Saturday pencilled in, Ryan Carmichael is back on the pitch doing agility & sprint work so he should be ready to join in full training next week.

Marty Bradley has some pain around his knee area which caused him to miss last week but it’s hoped he suffered no reaction to training this week while Conall McGrandles returns to the squad after serving a one match suspension against Newry City AFC.

Ballyclare Comrades had a terrible start to this seasons Bluefin Sport Championship winning only two of their first eight league games and suffering 5-0 defeats to both ourselves and Ballinamallard United. They also threw away a four goal lead away against Loughgall which seen them lose the game 5-4 and resulted in Stephen Hughes resignation and former Portadown player Paul Harbinson taking over the hot seat.

Since Harbinson’s appointment there has been some improvement with impressive victories against promotion and title hopefuls in the shape of Loughgall and Ballinamallard United and draws against Ards and Dundela however Harbinson has only three wins in his nine league games in charge.

Portadown have a notoriously poor record at Dixon Park with our last victory there coming back in 2009 with David McCullough grabbing a brace in a 5-0 win, on our three visits since then we’ve been on the losing side on each occasion.

In fact between 1990/91 & 1994/95 we only tasted victory at Dixon Park on two occasions in five league visits, a 3-0 win in the double winning 90/91 season and a 1-0 win in 1994/95 thanks to a Sandy Fraser goal. We suffered damaging defeats in 91/92 & 94/95 at Dixon Park which derailed title challenges but with the fight and hunger in this current crop of Ports players Matthew Tipton will be confident he can put any talk of Dixon Park being ‘a bogey ground’ for Portadown to bed.

Last time out in the Bluefin Sport Championship Ballyclare Comrades had their game away to Knockbreda postponed but in their last match they were beaten 1-0 by Newry City AFC at Dixon while Portadown defeated Newry City AFC 2-1 last Friday night at the Showgrounds.

The last meeting between the two sides came back in August with Portadown running out 5-0 winners at Shamrock Park with Aaron Duke grabbing a hat trick.