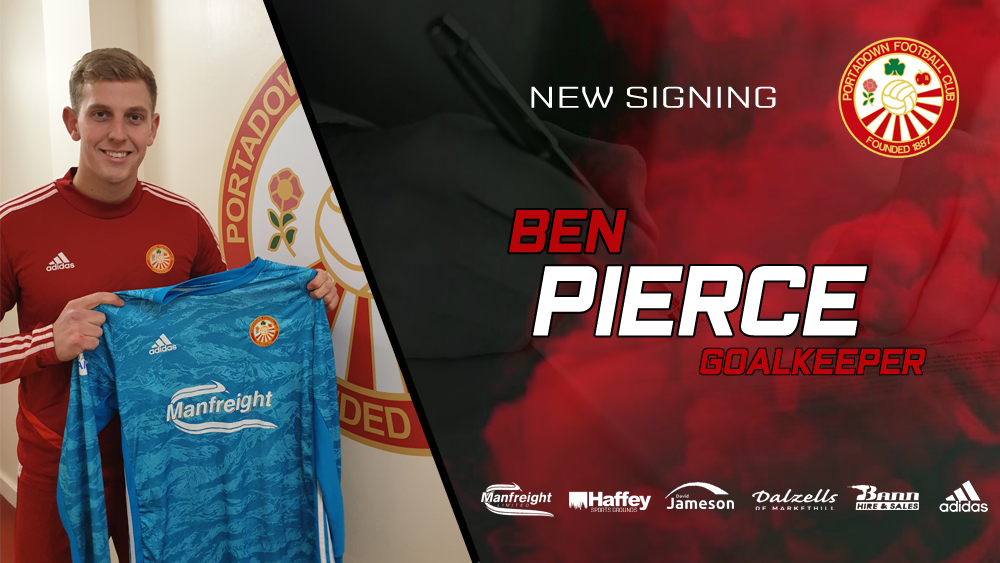 Portadown Football Club is delighted to announce the signing of goalkeeper Ben Pierce on a deal until the end of the season.

Manchester-born Pierce, 21, stands at 6ft 4in and was most recently with Sky Bet Championship club West Brom following spells at the academies and youth systems of Everton and Manchester United.

Portadown manager, Matthew Tipton, had the following to say on Ben:

“This deal is one that’s been a bit different as we thought all business had been done with the Transfer Window closing last week. However Aidans injury hasn’t cleared up as we had hoped so our attention the last few days has turned to out of contract pros that we could sign.

I must give Dave all the credit for this move for Ben. Endless hours spent searching internet databases & contacting goalkeeper coaches both here & in England led us to Ben.
Once we received Bens cv & then subsequent footage it was clear to us that Ben has tremendous ability & will fit in with our style, system & philosophies.

Ben has a glittering array of clubs on his cv already & everyone we spoke to sent glowing reports on him. Ben himself has been a credit so far in getting the move on track & has shown tremendous maturity already.

He trained with us last night & settled in brilliantly. The biggest factor was the race to try to get everything completed & Ben eligible to play tomorrow. Thankfully that’s all in place so I can officially welcome Ben to the club & hopefully we can share successes together as a whole club & community.”

We look forward to welcoming Ben to Northern Ireland and Portadown as he links up with Matthew Tipton ‘s squad and joins our push for promotion.