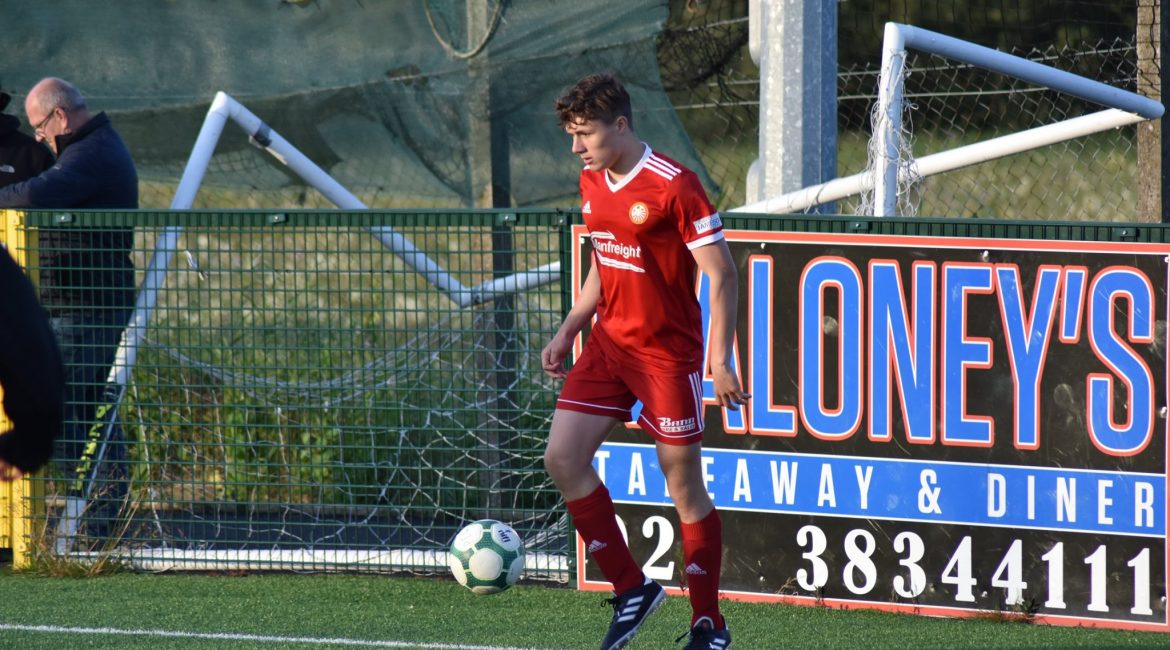 The Ports got off to a good start, going ahead after Oisin Ginesi was upended by the visiting goalkeeper, Dane McCullough (pictured) stepped up to the mark and slotted home with aplomb. The visitors got back on level terms after some pin ball in the Ports box seen the ‘Point capitalise, but it wasn’t long before the Ports got their noses back in front when striker James McCammon found himself with a glorious one-on-one chance and slotted home with confidence. It was all Ports from then on as Ginesi was able to finish after McCammon showed great skill out wide to find the forward inside the ‘Point box. For the Ports’ fourth goal, Matt Creighton linked up with McCullough on the left and after exchanging passes they where able to find McCammon who again finished with class into the bottom corner. A fifth goal was was only a matter of time as the young Ports where surging with confidence and this time it was McCammon to turn provider as he slipped through tall midfielder Issac Baird who was able to deceive the on-rushing keeper and find the bottom corner. To round off the impressive display the Ports where not finished yet as the energetic McCullough burst forward again from his left back position to exchange a one-two with McCammon and the young full back was able to get a shot away which nestled in the back of the net to give the Ports an impressive 6-1 and into the next round of the cup. Portadown u18s 6-1 Warrenpoint Town u18s

Next up, Portadown u20s welcomed Lisburn Distillery Reserves to Browstown Park and after a strong early few minutes from the visitors it didn’t take long for the Ports to take control and Micheal Wood found himself in behind the Distillery back line and was able to beat the keeper to the ball, nod over his outstretched hands and into the net. The Ports then looked in complete control and with some neat passages of play cut open the visitors at will with Michael McCavitt impressing and it was him to get the next goal as he received the ball from winger Josh Irwin, spun his defender and finished smartly giving the keeper no chance. He got his second of the game and the Ports’ third 10mins later as Wood was able to find a pass through the visiting defence and McCavitt finished low into the bottom corner. The visitors got a late consolation goal but the young Ports side where able to control the rest of the game and hold out for another impressive win. Portadown u20s 3-1 Lisburn Distillery Reserves