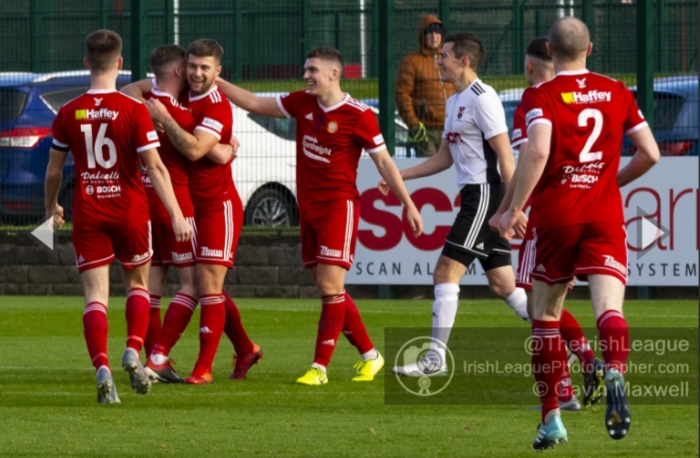 Portadown are back in Bluefin Sport Championship action this Saturday (15 February 20) when we take on Queens University at Shamrock Park (Kick off 3pm).

Portadown are coming off the back of a 4-0 victory over bottom of the table Knockbreda last Saturday, a win which seen the impressive debut of goalkeeper Ben Pierce who kept a clean sheet – the first clean sheet for the Ports since the Boxing Day victory over Loughgall.

In terms of injuries this week we seem to be turning a corner.

Marty Bradley obviously has been in & out all season with an ongoing knee problem however we’ve now decided to take a different route with him & have altered his training program & hopefully this will see him being available more often.

Ryan Carmichael has made a rapid recovery from his torn medial so much so he’s been able to join in training this week. We’ll sit down & assess him after training before deciding whether he needs a reserve game before being back in the squad.

Greg Hall has also come on massively & is now running pain free out on the grass so his next step is to get a ball involved as soon as possible.

Full credit must go to these boys as it’s not easy being injured & the condition they have kept themselves in through the work they do with Chris & also away from us is remarkable & will make their transition back into full training & playing so much easier.

Queens University have had a steady 2019/20 Bluefin Sport Championship campaign so far following their promotion and find themselves sitting in 9th place although their away form hasn’t been great with only two wins away from the Dub all season – away to Knockbreda and Loughgall, they’re also coming off three straight defeats in the Bluefin Sport Championship.  Queens Irish Cup exploits this season have been well documented with a historical and stunning 2-1 over Linfield and taking title challangers Glentoran to the wire in the next round.

The last time the two teams met was at the Dub earlier this season when Queens came back from 3-0 down to salvage a 3-3 draw.