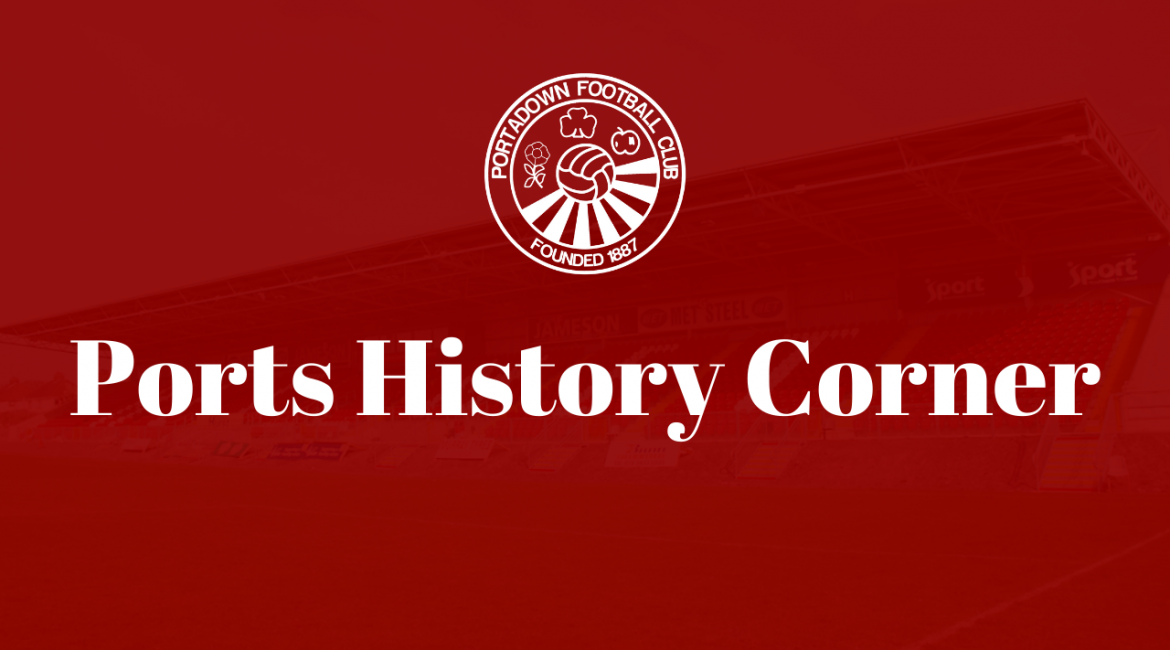 In 1910, Gallaher Ltd issued a series of 100 cigarette cards entitled, ‘Association Football Club Colours’. Card No.7 in the series illustrated the colours of Portadown FC and the featured player was Michael Curran. 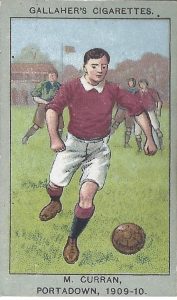 Curran was born in Workington, England on 23rd July 1883 and signed for Portadown in October 1908. He came to ‘The Reds’ from England where he had been playing locally for a club in the North West of England while working as a labourer in the Workington Iron Works. He made an immediate impact at Shamrock Park playing in the Outside-right position.

Michael was appointed club captain in 1909 and in February of that year, he was selected to represent the Mid-Ulster FA against the North West FA, together with fellow Portadown players, Best, Morrow, Gregg, Reavy and Hegan. The match was played at Shamrock Park, resulting in a 4-1 success for the ‘homesters’ including a Reavy hat-trick. In November of that year Irish League side, Distillery, tried to sign him, but he refused to make the move to senior football despite newspaper reports to the contrary proclaiming he had signed for the Belfast Whites. The 1909-10 season was pivotal in Curran’s career. He picked up a winners medal when Portadown defeated Lurgan Celtic 3-2 in the Mid-Ulster Cup Final, played at Grosvenor Park, Belfast. This was the only match played in Belfast that Saturday afternoon, 7th May 1910. The country was in mourning due to the death of King Edward VII, but unfortunately, there were no other free dates available to play the final, and the match had to go ahead, watched by a large crowd of spectators. 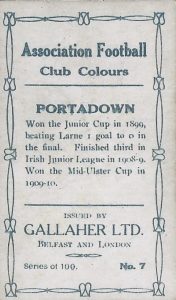 That 1909-10 season also saw Curran rewarded for his fines displays with a cap for the Irish Junior League against Lanarkshire in the annual encounter between the sides. A crowd of 6,000 spectators witnessed the match at Celtic Park, Belfast, with the Scotsmen winning 3-0. A number of Ports players were tipped for selection against the Glasgow League in January 1910, including Curran, Campion, Best and McBride, but the only Portadown representative to make the journey to Glasgow was James Mawhinney, in his role as Chairman of the Junior League Committee and honorary secretary of the Mid-Ulster FA

In May 1910 Curran was signed by Leeds City, indeed such was the number of Irish players signed by the Yorkshire club that summer, they changed their club shirts to Green and placed green flags either side of the halfway line to try and make the new Irish recruits feel at home. Unfortunately, it did not work out for Michael at Leeds and he returned home to Portadown just before the start of the 1910-11 season, where he married a local girl in the town on 17th August. He resumed his football career with Portadown Celtic, but in February 1911, having secured work in Belfast, Curran signed for Distillery. In August 1911, Michael was on his travels again, this time immigrating to Canada, but his sojourn was short lived and he returned home in October, and signed for Lurgan Celtic. Within a few weeks, however, he moved back to England for work purposes. His yo-yo existence continued when in January 1912, he returned home, signing once more for Lurgan Celtic.

Back and forth he went, when within a short time he was back ‘across the water’ playing for Barrow St. Mary’s FC. The following year he returned to Canada in March 1913, where he signed for Queen’s City FC.

Michael Curran died of heart failure in Dayton, Ohio, USA on 10TH November 1955 at the age of 72.