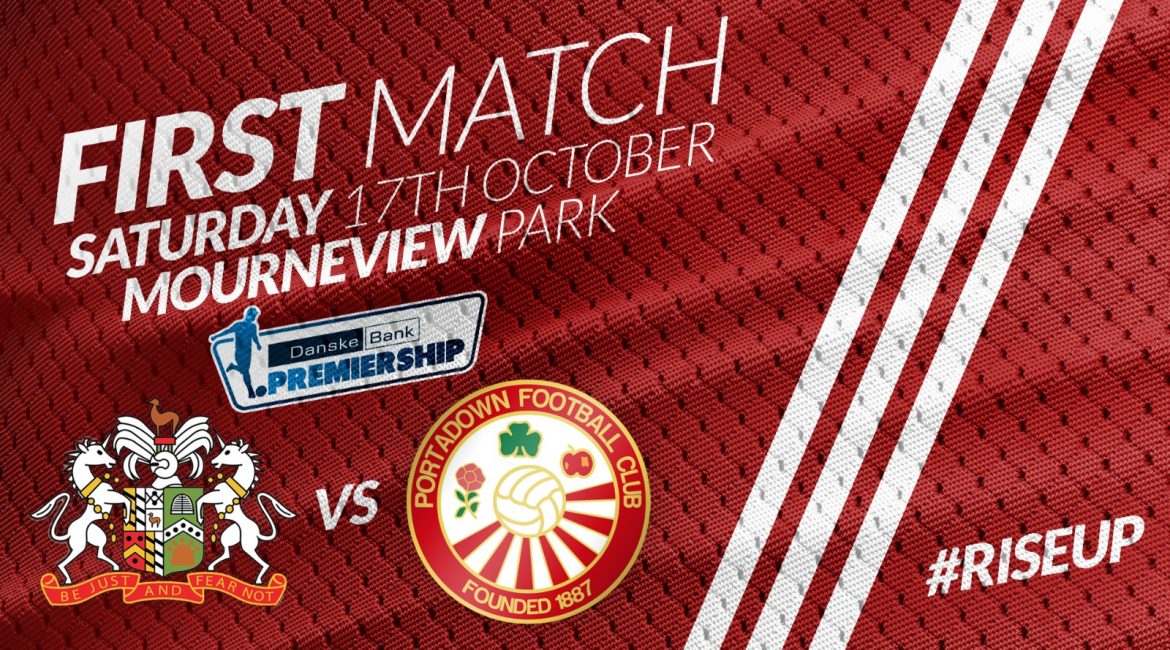 When Portadown kick off against Glenavon on Saturday evening at Mourneview Park it will bring an end to 224 days without competitive football for Matthew Tipton’s men, it will also bring to an end to an absence from the top table of Irish league football of 3 and a half years or 1267 days…but who’s counting and most importantly…the Ports are BACK!

What better way to kick off our return to the Danske Bank Premiership than with the short trip to Mourneview Park to take on Glenavon in the Mid Ulster Derby with a 5:30pm kick off.

The worlds landscape has changed massively in the 7 months since Portadown’s last competitive game, a 2-0 win against the PSNI, and the same can be said of the Portadown squad – out of gone Marty Bradley, Liam McKenna, Aaron Duke, Brendan Glackin & Poggy Robinson while in have come Nathan Kerr, Barney McKeown, Ruairi Croskery, Aaron Burns, Scott Pengally, and Ben Guy.

It’s been over 6 years since Portadown recorded a victory over Glenavon at Mourneview, a 4-2 win back in September 2014, and bar being awarded the 3 points for the Boxing Day derby in 2016 after Glenavon fielded an eligible player the Ports last success over Glenavon came at Shamrock Park in November 2014 in a 3-2 victory thanks to goals from Chris Casement, Sean Mackle and Mark McAllister – a win that put Portadown top of the Premiership on goal difference.

From the Glenavon side of things their manager Gary Hamilton is no stranger to Portadown having spent 5 years at Shamrock Park, from 2001 to 2006, winning an Irish League title and Irish Cup and he’s informed the media that Andy Hall, Greg Moorehouse and Matthew Fitzpatrick are all out of tomorrows game through injury while captain Jonathan Tuffey will be missing as he’s getting married.

Glenavon have also been busy in the transfer market over the prolonged pre season, bringing in Sean Ward, Michael O’Connor, Peter Campbell and Matthew Snoddy.

The last time the two clubs met was in the semi-final of the Mid-Ulster Cup in November 2017 with Glenavon winning 2-1 thanks to goals from Adam Foley and Jordan Jenkins while Peter Duffin replied for the Ports.

After a long break we are finally preparing for a league game & I must say I’m as excited as I’ve been in a long long time. Add in the fact that it’s our long awaited return to the Premier League as well as a Mid Ulster derby against our nearest rivals makes this a special day to be involved at Portadown.

We come off the back of the strangest pre season I’ve known in my long time in football for many reasons but I must say our players have dealt with it in a tremendous manner & that fills me with positivity for the season ahead.

I know our fans can’t be there in person tomorrow but I’m sure we will still have your backing in front of the tv screens & I hope we do you proud not only tomorrow but over the next few months as well.

Tomorrows game will be live streamed on bbc.co.uk/sportni and the BBC iPlayer