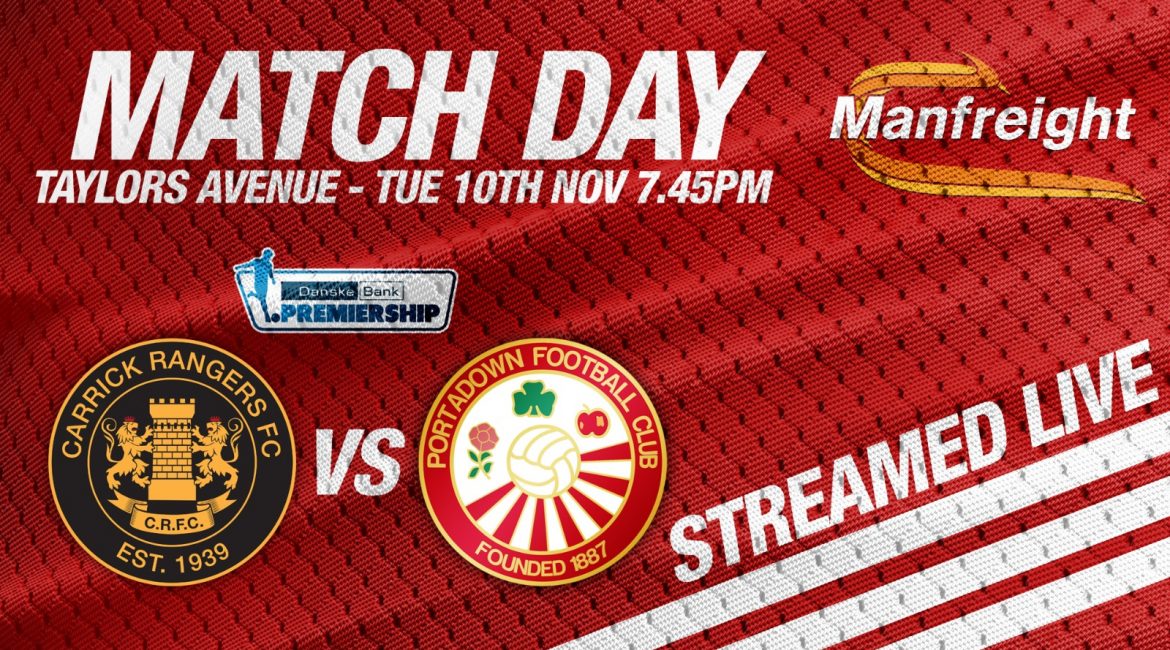 Portadown are back in Danske Bank Premiership action this evening (Tues 10 November) when we take on Carrick Rangers at the Loughshore Hotel Arena, kick off 7:45pm

Carrick Rangers picked up their first point of the campaign on Saturday with a 0-0 stalemate against Dungannon Swifts at the Loughshore Hotel Arena while Portadown narrowly lost out 2-1 to reigning champions Linfield at Shamrock Park.

The last time the two clubs met was in the pre Championship play-off in April 2019 with Carrick Rangers running out 2-0 winners, Carrick would then go on to defeat Ards in the play-off final to reach the Premiership promised land with the Ports having to wait another season before joining Carrick at the top table of Northern Irish football.

Portadown have a pretty sorry recent record at the Loughshore Hotel Arena losing the last four with our last victory in Carrickfergus coming back in April 2016 when a last gasp Garry Breen strike went a long way to securing our Premiership safety that season.

Carrick Rangers had a great first season back in the top flight last season finishing an impressive 8th place after being among the favourites for the drop, Carrick manager Currie has not rested on his laurels however bringing in Jonny Frazer on loan from Glentoran, Jordan Gibson from Loughgall, Reece Glendinning from Ballymena United, Dee Fearon from Dundela, Daniel Reynolds from Linfield, Joe Tully from Larne, Alexander Gawne on loan from Coleraine and of course Liam McKenna from Portadown.

Portadown manager Matthew Tipton spoke to the Portadown media team ahead of tonights game and had the following to say:

Tonight’s game will be another tough test for us & in a completely different manner than Saturdays game. Carrick is a notoriously difficult place to go & from our battles in the championship we know what to expect tonight.

Cricky Crane will miss out after his sending off on Saturday & it’s unfortunate for him as he’s had to be patient to get back in the team & I thought he was performing well on Saturday.

On the positive side it was good to get Barney McKeown onto the pitch & we hope that he now gets an extended run injury free.

Tonights game will be live streamed by WeArePortsTV LIVE via https://www.247.tv/niprem

Last Five Head to Head at the Loughshore Arena (All competitions)