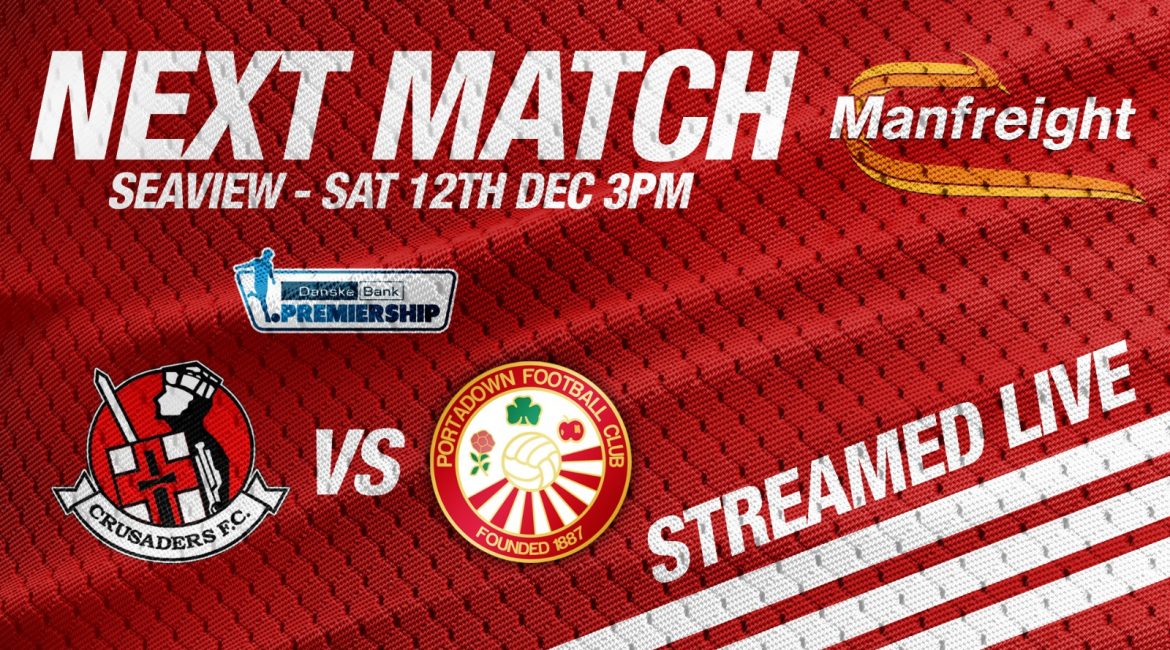 Portadown are back in Danske Bank Premiership tomorrow (Sat 12 December) when we take on Crusaders at Seaview, kick off 3pm.

Crusaders are coming off the back of a 2-0 win over Glentoran last weekend while the Ports had an empathic 3-0 midweek victory over Dungannon Swifts at Stangmore.

The last time the two clubs met was back in February 2017 at Shamrock Park when the Ports held the Crues to a 1-1 draw with Marcio Soares on target for the Ports, Soares had only recently returned to Shamrock Park after a spell at Seaview. Crusaders have won 4 out of the last 5 meetings between the two clubs with the Ports last victory over the men from the Shore Road coming back on the opening day of the 2015/16 season when two Darren Murray goals sealed all 3 points for the Ports at Seaview, Murray would be sent off later in the same game.

Crusaders ended last seasons curtailed campaign in third place meaning no European football for Stephen Baxter’s men for the first time since the 2010/11 season. Baxter has delved into the transfer market to make sure there’s no repeat this year, Ben Kennedy has arrived from Stevenage along with former Rangers defender Aidan Wilson and Adam Lecky from Ballymena with Sean Ward, Howard Beverland, Kyle Owens and Paul McElroy all departing.

Portadown manager Matthew Tipton spoke to the Portadown media team ahead of tomorrow evenings game and had the following to say:

Tomorrow we make the journey to North Belfast to face Crusaders on the back of 2 positive results however we know that a trip to Seaview is amongst the toughest in the league & we will have to be right on our game to get anything from there.

The impact of the 2 results cannot be underestimated in terms of what it has done to the players mentality. We could sense it on Sunday morning when we got together that the bounce amongst the group was back & that carried into Tuesday night. Hopefully this continues into the game & we give a good account of ourselves.

On the injury front there isn’t much good news.

Callum McVeigh is awaiting his operation for his cruciate injury.

Paddy McNally is having a scan today so fingers crossed we hear some good news on the back of that but even being optimistic we don’t expect to see Paddy for at least 2 months.

Ben Guy was due back last week after getting his stitches removed however when the surgeon was checking the finger he wasn’t happy so Ben had had to go in for a second operation today, we don’t have a time scale for him returning but I’d be very surprised if it was before mid January at the least.

All 3 lads have our best wishes for a speedy recovery.