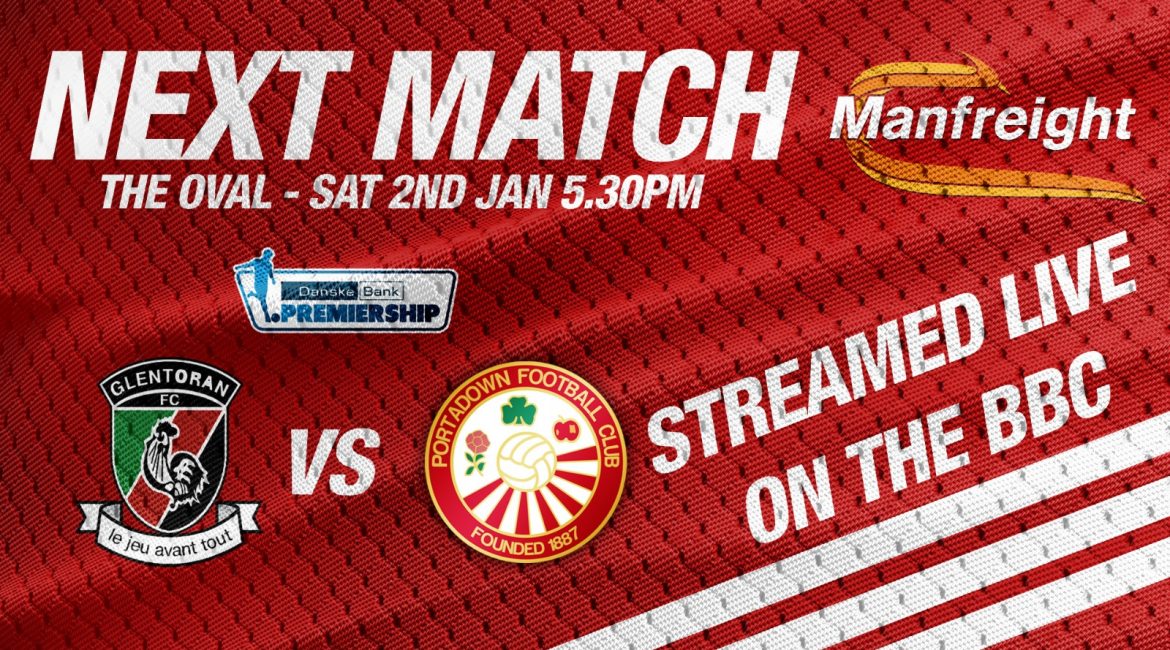 After a long 3 weeks Portadown are back in Danske Bank Premiership tomorrow (Sat 2 January) when we take on Glentoran at the Oval, kick off is 5:30pm and the game is live on the BBC NI Sport website and the BBC iPlayer.

Glentoran are coming off the back of a 0-0 draw with Ballymena United back on 19 December while the Ports were on the end of a 5-0 defeat to Crusaders at Seaview on 12 December.

Ports manager Matthew Tipton has already made the most of the opening few days of the January transfer window by bringing in Ben Tilney on loan from Larne, however it remains to be seen if he’ll be registered in time to make his debut on Saturday against Glentoran. Ports duo Chris Crane and Conall McGrandles have also been transfer listed as Tipton sets about freshening up his squad for the second half of the season.

The last time the two clubs met was almost exactly a year ago, 4th January 2020, in the Irish Cup when Glentoran would come out on top after a penalty shoot out with the tie ending 2-2 after extra time, the Glens would be awarded a controversial penalty in injury time during normal time to equalise and make it 1-1 with the Ports taking the lead again in the second minute of extra time before being pegged back again.

The last time the two clubs met in the Danske Bank Premiership was back in April 2017 when an already releagted Portadown would lose 3-0 to Glentoran at the Oval with goals from Eric Foley and a brace from Curtis Allen.

The last time the Ports were victorious over Glentoran was back in December 2015 when we ran out 5-3 winners at Shamrock Park in one of many classic Ports v Glens games over the years, Ports scorers that evening were Gary Twigg with two, Darren Murray with two and a Robert Garrett goal – Glens goals came from Curtis Allen (2) and Marcus Kane.

The last time the Ports came away from the Oval with three points was back in December 2013 when we ran out 2-0 winners thanks to goals from Gary Twigg and Darren Murray in a game live on Sky Sports.

Glentoran ended last seasons curtailed campaign in fifth place but lifted the Irish Cup with victory over Ballymena United.  Manager Mick McDermott has been busy in the transfer market as the Glens aim to challenge for the title, Luke McCullough, Dale Gorman, Dayle Coleing, Bobby Burns, Jamie McDonagh, Rhys Marshall and Jay Donnelly are among some of those added to McDermott’s squad as he aims to secure a first title for Glentoran since 2008/09.

Portadown manager Matthew Tipton spoke to the Portadown media team ahead of tomorrow evenings game and had the following to say:

After a 3 week break we are looking forward to getting back on the pitch tomorrow against Glentoran.

We obviously had the enforced break after the Crusaders game due to covid guidelines which when we look at the upcoming fixture list might be a blessing in disguise.

Normally January is seen as halfway point or just beyond so the transfer window opening can be a strange time as your team & squad is more settled. However this year we have only played 9 games so with 29 league games left plus Irish cup we will probably see more incomings than I would normally do at this stage. On that note we welcome in Ben Tilney on loan from Larne & I’m delighted to get him in.

On the injury front Callum McVeigh has had his ACL surgery so now he’s starting his rehabilitation. Paddy McNally on advice of the surgeon will not be getting operated on for his posterior cruciate injury but is instead in a brace that should see his recovery easier even if it’s not quicker. They both have a long period of time ahead of them now in the capable hands of Chris.
Ben Guy is nearing his date for getting back on the pitch & that’s going to be a big boost for us.

In what has been the strangest of years on & off the pitch we all hope that 2021 brings some positive memories for everyone.