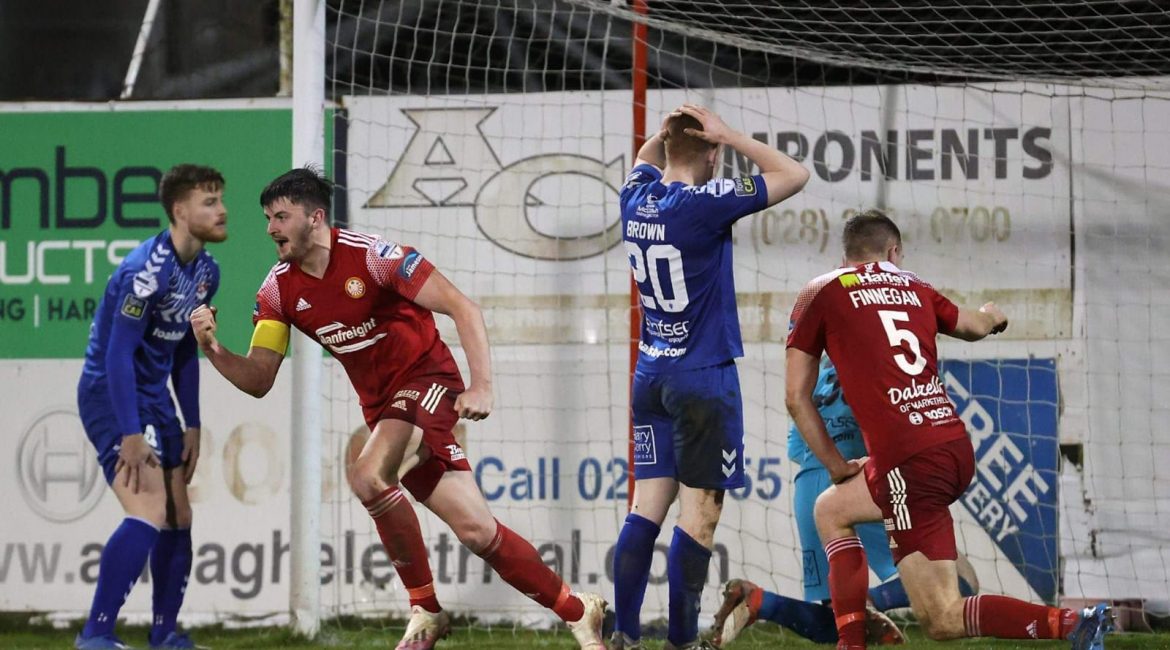 Portadown earned a well deserved point on Tuesday evening in a 2-2 draw against Crusaders at Shamrock Park.

The Ports were the more dominant side in the opening 10 minutes with Adam McCallum rattling the post from a corner and Crues keeper Gerard Doherty saving follow up efforts from Sam Warde and Ben Guy respectively.

The Crues also had opportunities in the opening quarter of the game through Ben Kennedy whose effort was well wide of the post and Paul Heatley also hit an effort from approximately 25 yards out well wide.

Lee Bonis had an opportunity doing well to control the ball just in the box however couldn’t hit the target with the resulting effort.

The opening goal came on the 25 minute mark when Crusaders captain Declan Caddell took advantage of a mix up in the box to slot the ball past Jacob Carney to put the visitors a goal ahead somewhat against the run of play.

Around the half an hour mark Stephen Teggart forced a good save from Crusaders ‘keeper Doherty winning a corner for Portadown which came to nothing.

Minutes later Ben Tilney broke down the left hand side from a Warde ball finding Barney McKeown who failed to connect cleanly with the ball allowing it to be easily scooped by the Crusaders goalkeeper.

Portadown got their equaliser when a quick free kick from Warde finds Teggart whose effort comes off the post and the resulting ball is tapped in by defender McCallum for his second goal of the season.

Four minutes into the second half Crusaders retook the lead on the counter attack, with Heatley finding room from a long pass to run through beating Ports ‘keeper Carney at his right post to make it 2-1.

Bonis had a big opportunity when he found a pocket of space from a set piece however couldn’t get a clean connection on his header which went past the post.

An unconventional short corner from Tilney who performed superbly all evening was flicked on at the near post by Kevin Healy with the ball rolling inches from the goal.

McCallum had a great chance to get his second goal when Doherty palmed effort away from under the crossbar with Ports players appealing that the ball crossed the line.

At the other end a mistake from Paul Finnegan found Heatley with keeper Carney doing well to make the save at his near post.

The Ports pressure paid off on the 89th minute following a free kick from Tilney finding Bonis, who heads a deflected effort into the back of the net for a well earned point for the men in red.

Our next fixture is this Saturday 30th January against Warrenpoint Town at Shamrock Park with a 3pm kick off. This game will be behind closed doors however will be live-streamed via http://www.247.tv/niprem