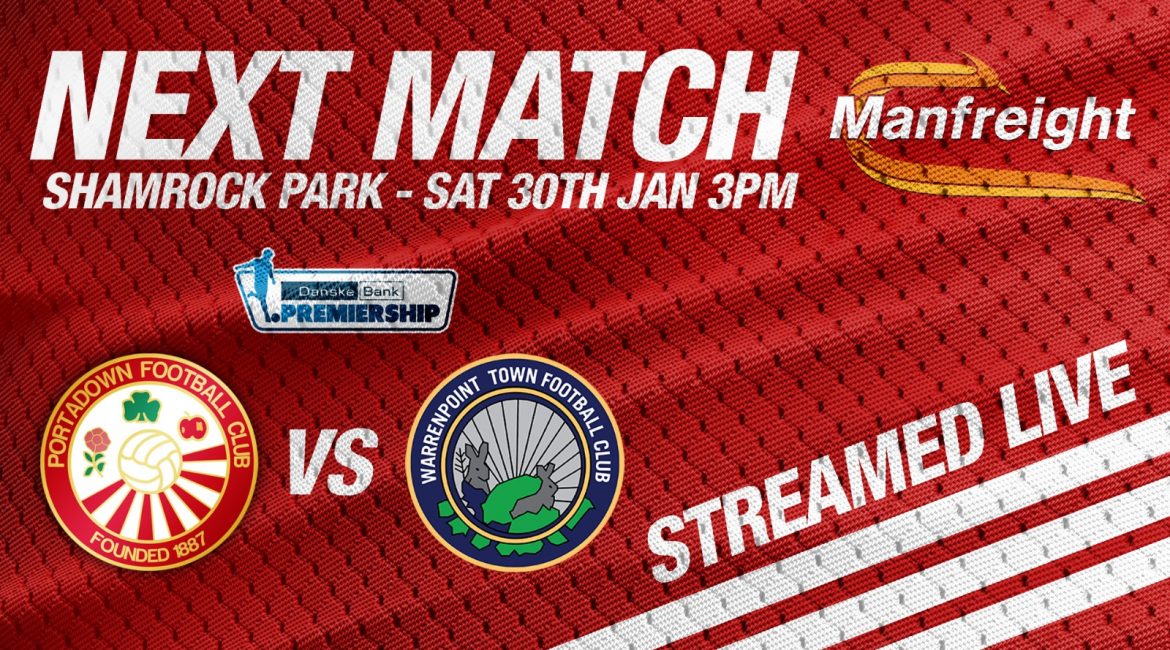 Portadown play their second Danske Bank Premiership game in a week as we welcome Warrenpoint Town to Shamrock Park this afternoon, kick off 3pm.

There’ll be a dark cloud hanging over Shamrock Park today following the death of Club chairman Ronnie Stinson this week, a plethora of tributes have been paid to Ronnie since his passing on Tuesday but the best tribute of all to the great man will be a performance befitting of him when the team runs out at Shamrock Park this afternoon at 3pm.

Warrenpoint Town come into the game off consecutive heavy away defeats to Linfield (6-0) last Saturday and a 4-0 defeat to Crusaders at Seaview on Saturday 2nd January.  In fact Warrenpoint Town have only picked up one win in their last six Danske Bank Premiership games with their last victory coming against Carrick Rangers on 5th December 2020.

Like Warrenpoint Town, Portadown have only one victory in their last six Premiership games as well however in those six games have managed draws against Ballymena United and Crusaders.

The last time the two teams met was earlier this season (31 October) when the teams played out a 1-1 draw at Milltown, Ports striker Stephen Murray had given the Ports the lead only for Matthew Knox to equalise for Warrenpoint early in the second half. Warrenpoint would finish the game with 9 men after having Colm Deasy and Gavin Peers sent off.

You have to go back to August 2015 for Portadown’s last victory over Warrenpoint, a 2-1 win at Shamrock Park thanks to goals from Gary Twigg and Keith O’Hara. In fact Warrenpoint have won the last five of the last six meetings between the sides in all competitions.

Portadown manager Matthew Tipton and his assistant David Miskelly are of course no strangers to Warrenpoint after guiding them to Championship success and promotion in 2017 during a 15 month spell in charge before departing for Shamrock Park in February 2018, and Portadown’s connection with Warrenpoint doesn’t stop with the management team as Ports players Conall McGrandles, Ruairi Croskery & Stephen Murray have also all been on the books of the Milltown club.

This afternoons game will be live streamed by We Are Ports TV LIVE via https://www.247.tv/niprem