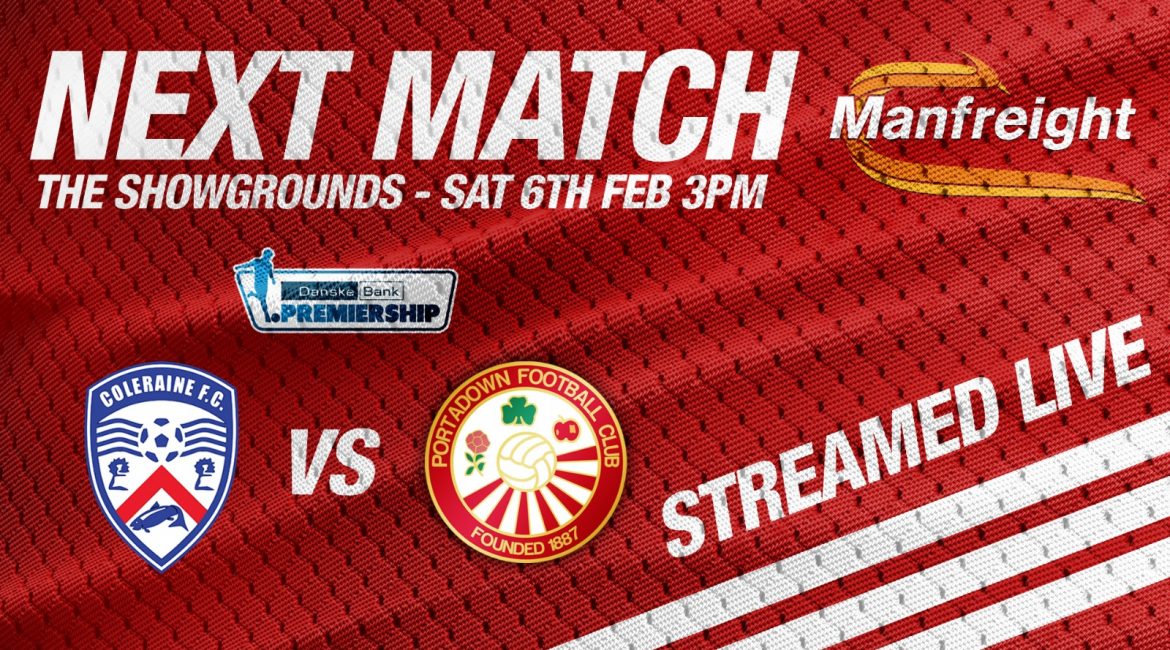 Portadown are back in Danske Bank Premiership action tomorrow (Sat 6 Feb) when we travel to the Coleraine Showgrounds to take on Coleraine.

Coleraine come into the game off the back of 2-2 draw with Cliftonville on Tuesday night while Portadown suffered a 3-0 defeat to Linfield at the National Stadium. Coleraine are unbeaten in their last 7 Danske Bank Premiership matches with their last defeat coming against Dungannon Swifts back on the 4th December, in fact they’ve recorded 6 wins in those 7 unbeaten games with Oran Kearney been named Manager of the Month by the Northern Ireland Football Writers’ Association for January.

The last time the two teams met was earlier this season, 24 October 2020, when Coleraine ran out 3-0 winners at Shamrock Park thanks to goals from Ben Doherty, Jamie Glackin and James McLaughlin.

You have to go back to February 2016 for Portadown’s last competitive victory over Coleraine, a 3-1 win at Shamrock Park in the Irish Cup thanks to goals from Ken Oman, Gary Twigg and Philip Lowry.  In league matters it’s New Years Day 2015 since the Ports sealed all 3 points against Coleraine, a 1-0 at the Showgrounds thanks to a Mark McAllister header while the last league win against the Bannsiders at Shamrock Park was a 2-0 win back 14 December 2013 with goals from Chris Ramsey and Gary Twigg. In fact Coleraine have won the last 7 (one of these being an automatic 3-0 win) Premiership meetings between the sides.

Tomorrow is yet another tough fixture away at Coleraine who are in great form currently. We are now approaching our 4th game in 11 days so this is where we are going to have to assess those players who have played all 3 to see what there levels of fitness are like.

We seen Tuesday Lee & Sam go down with injuries to add to the ones picked up last Saturday but what that does is enable other players to come into the team to stake their long term claims.

On a positive note with our long term injuries both Paddy McNally & Callum McVeigh have started the next stages of their rehab now with Chris & it was good to see them both last night.

Luke Wilson also joined in for his first session in 5 weeks so we are hoping to build his strength & fitness up over the next while.

Tomorrows game will be live streamed by Coleraine TV via https://www.247.tv/niprem

Last Five Head to Head at the Showgrounds (All competitions)