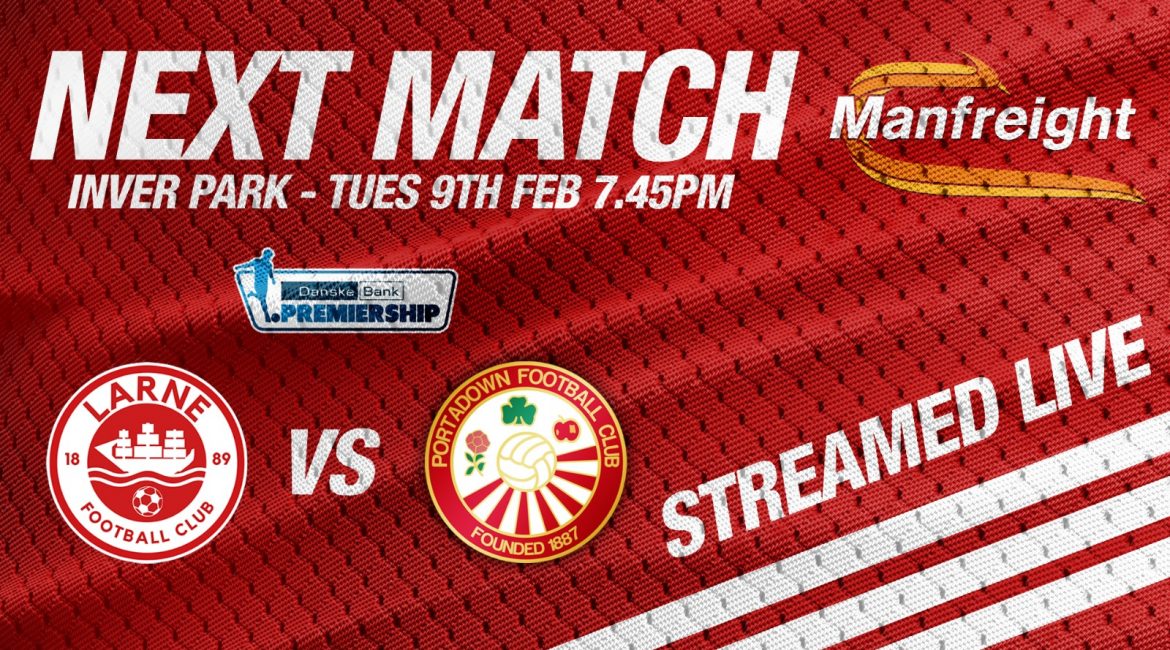 Portadown are back in Danske Bank Premiership action this evening (Tues 9 Feb) when we travel to Inver Park to take on Larne.

Larne come into the game off the back of a 1-1 draw with Warrenpoint Town at Inver Park while Portadown had the same scoreline against Coleraine at the Showgrounds on Saturday. Saturdays draw with Warrenpoint Town means Larne have only one win in their last six Danske Bank Premiership games and manager Tiernan Lynch will be keen to address that dip in results as Larne aim to get their title challenge back on track.

The last time the two teams met was in April 2019 in the Bluefin Sport Championship at Inver Park, this was the day that Larne were presented with the Championship title and they would go on to defeat Portadown 3-0 with goals from Tomas Cosgrove, Ben Tilney and David McDaid.

Portadown’s last victory over Larne came in our opening Championship game of the 2017/18 season when we won 3-0 at Taylors Avenue thanks to goals from Niall Henderson, Matty Hazley and Kyle McVey, Larne were ground sharing with Carrick Rangers at the time due to ongoing works at Inver Park.  Portadown’s last win at Inver Park came back in January 2017 in the Irish Cup when a debut goal from Adam Foley as well as a Stephen Hughes goal secured Portadown’s place in the next round. For the two teams last meeting in the top tier of Irish League football at Inver Park you have to go back to February 2008 with goals from Aime Koudou and a 90th minute winner from Gary Liggett sealing a 2-1 win for the Ports.

Tonight’s game is yet another tough away game but it’s what we worked so hard for when chasing promotion from the championship over the past few years.

Saturday was physically tough on a heavy pitch so we will again have to evaluate all of the players to make sure they aren’t getting flogged especially with coming off a heavy pitch & onto 3G.

Adam Salley is suspended & Ben Tilney unavailable so there will be at least 2 changes with George, Sam Warde & Lee Bonis all still to be assessed prior to kick off.

Luke is still a few weeks away from being available for selection.

Tomorrows game will be live streamed by Larne via https://www.247.tv/niprem