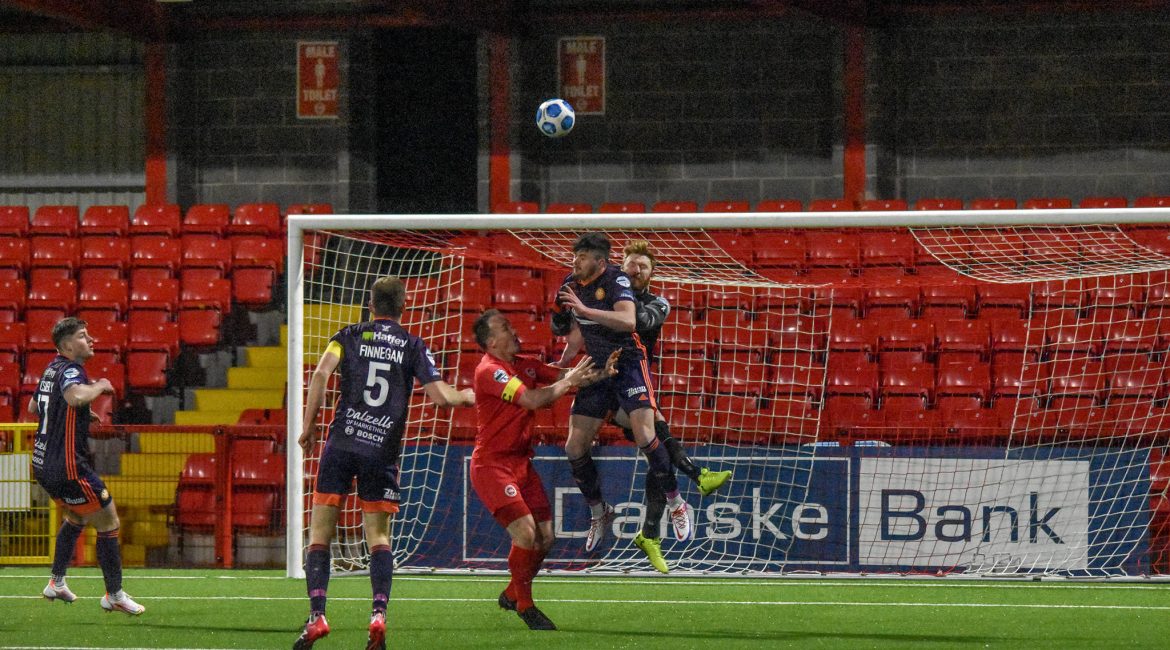 A late header from Lee Bonis sealed a point for Portadown away to Larne on Tuesday night at Inver Park.

Portadown started positively as has been the theme of recent games, Eamon Scannell had an effort from a George Tipton corner early on fail to test the keeper.

Portadown had the opening goal on six minutes, when Larne keeper Devlin misjudged the power on a header from defender Graham Kelly gifting the ball to Ben Guy to score an easy tap in to give the Ports a 1-0 lead.

Two minutes later the home side were level, midfielder Mark Randall had an effort from the edge of the box parried by Ports keeper Jacob Carney and the ball fell to Larne’s new signing Dylan Mottley-Henry to score his first goal for the Invermen.

In the first half the Ports defence struggled to deal with Mottley-Henry’s bombing runs down the right hand side with the Englishman playing a key role in putting Larne in front on 19 minutes, a ball from the right found substitute Ronan Hale who fired the ball into the back of the net from close range to make it 2-1 to the home side.

On 25 minutes Larne had a decent opportunity when good play from Hale found Marty Donnelly in the box whose subsequent effort was neutralised by a challenge from Ports defender Adam McCallum, allowing Carney to easily gather the ball.

Towards the end of the first half the game was relatively quiet in comparison to the opening 15-20 minutes with Donnelly playing an inch perfect cross onto the head of Hale who could only head wide on 39 minutes.

Early on Mottley-Henry had an effort from close range straight at an untroubled Ports keeper Carney on 47 minutes.

Soon after Carney had to be alert again to turn away a thunderous right angled long range effort from Hale on 50 minutes.

The hosts went so close to making it three on 69 minutes when a super ball from Donnelly found the head of Mottley-Henry who sent his effort just wide of the post.

As the hosts piled on the pressure young midfielder Conor McKendry proved impressive playing a nice 1-2 with Donnelly however the substitute McKendry couldn’t keep his effort on target.

The Ports resolute second half defending paid off when a deep ball from George Tipton found Lee Bonis who out jumped Larne keeper Devlin to head the ball into an empty net for an equaliser.

With three minutes of injury time the men in purple spent large periods with the ball in the corner and had appeals for a handball in the box waived away after a dangerous run from Lee Bonis.