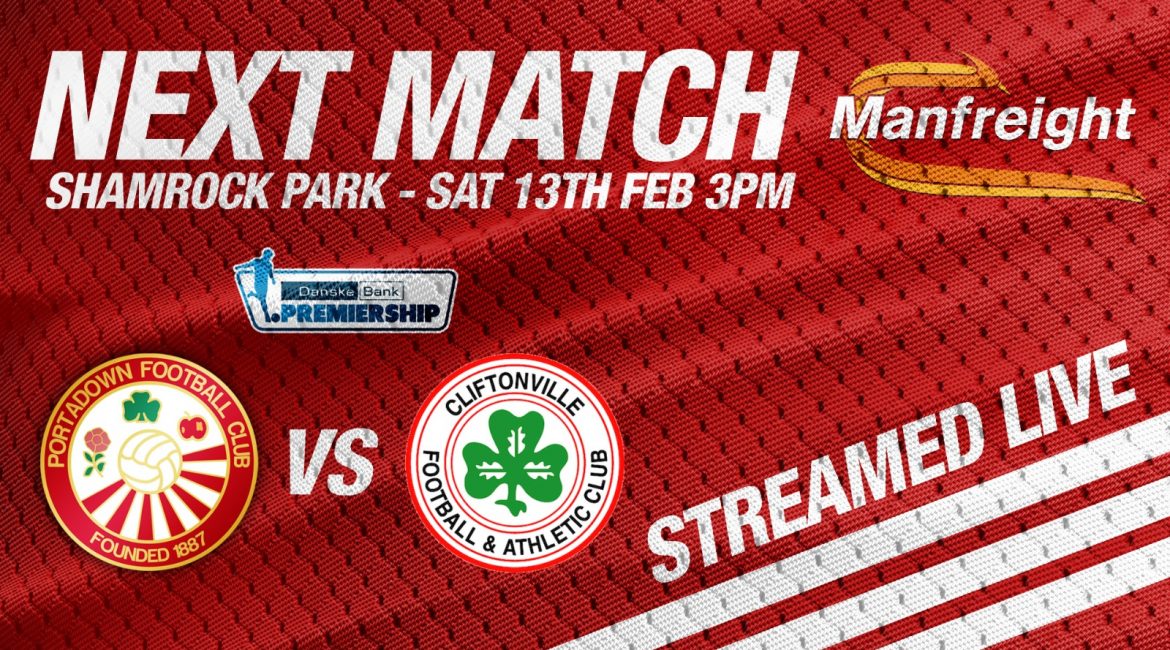 Portadown are back in Danske Bank Premiership action tomorrow (Sat 13 Feb) when we take on Cliftonville at Shamrock Park, kick off 3pm.

The last time the two clubs met was back in November 2020 with Cliftonville running out 5-0 winners against a depleted Portadown squad who were playing their first game in 18 days following a covid breakout in the camp, this was a thirteenth win in a row for Cliftonville over the men from Shamrock Park with all thirteen wins coming without conceding a Portadown goal. The last goal Portadown scored against Cliftonville came from Gary Twigg in a win at Solitude in January 2014 – this being Portadown’s last win over the men from Solitude.

As the above stat suggests Portadown have a pretty sorry recent record at Shamrock Park against Cliftonville losing the last five and without a win in the last eleven with the last win over Cliftonville at Shamrock Park coming back in February 2011 with goals from Alan Cawley and Kevin Braniff, former Ports goalkeeper Jack Duffin was between the sticks that evening for Cliftonville.

Both teams can boast former players from each club in their current squads – Cliftonville having former Ports Garry Breen, Chris Curran and Declan Dunne who spent a season long loan at Shamrock Park while Portadown have Paddy McNally, Conall McGrandles and Chris Crane who all were on the books of Cliftonville. Down through the years quite a number have represented both teams including Darren Murray, Chris Ramsey, Peter Hutton, Peter Murray, John Convery, Michael Collins and Stevie Cowan among them.

Cliftonville had Jamie Harney sent off in their 2-0 win over Warrenpoint Town on Tuesday evening, Cliftonville’s second red card in successive matches following Garry Breen’s sending off against Glentoran, so Harney will miss the trip to Shamrock Park along with long term injury victim Joe Gormley who is recovering after breaking his elbow at the end of January. Portadown can welcome back Ben Tileny to the squad after he missed the 1-1 draw with Larne while Adam Salley will serve the second of his three match ban following his red card against Coleraine.

After 3 tough away games we are happy to be back playing at home tomorrow. In what has been the strangest of seasons the fact we have only played 5 at home against 10 away is another anomaly that will nearly be rectified over the next 11 days with 4 home games scheduled. Probably the most important person in this schedule will be Jack Moffett as he works as hard as ever to produce a playing surface that enables us to try to play the style of football that we want.

The knocks & niggles continue to come but what we have is a group of young men who are determined to play every minute of every game which is brilliant for me to manage. In general I don’t like to chop & change the goalkeeper & defenders as I feel they need consistency whereby forward players are able to jump in & out of the team with not as much of disruption & bringing with it a freshness to attack the opposition.

I have read & spoken a lot about the tough schedule that we are currently in & will be for the rest of the season however when we look at our GPS data the boys are smashing records week on week which is a massive credit to them not only for the work they do on the pitch but also away from us in terms of rest & rehabilitation with diet, sleep & recovery a massive part of what is needed now.

Tomorrows game will be live streamed by We Are Ports TV LIVE via https://www.247.tv/niprem

Last Five Head to Head at Shamrock (All competitions)