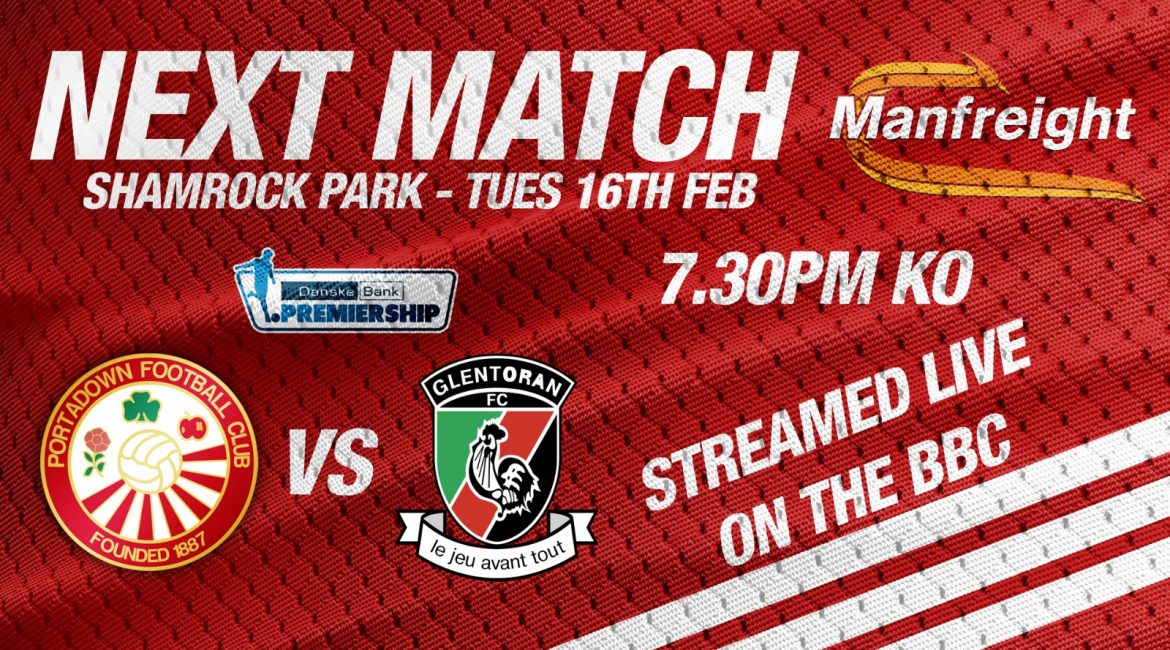 The games keep coming thick and fast as Portadown are back in Danske Bank Premiership tomorrow (Tues 16 Feb) when we take on Glentoran at Shamrock Park, kick off is 7:30pm and the game is live on the BBC NI Sport website and the BBC iPlayer.

Glentoran have seen their last two Premiership fixtures fall foul of the weather but are coming off the back of a 1-0 win against Cliftonville Saturday week ago following a stunning strike from Jamie McDonagh while the Ports had their third draw in a row following a 1-1 draw with Cliftonville at Shamrock Park on Saturday past.

The last time the Ports were victorious over Glentoran was back in December 2015 when we ran out 5-3 winners at Shamrock Park in one of many classic Ports v Glens games over the years, Ports scorers that evening were Gary Twigg with two, Darren Murray with two and a Robert Garrett goal – Glens goals came from Curtis Allen (2) and Marcus Kane.

Glentoran ended last seasons curtailed campaign in fifth place but lifted the Irish Cup with victory over Ballymena United and currently find themselves 7th in the Danske Bank Premiership and have recently added Cliftonville striker Conor McMenamin to their ranks with Paul O’Neill heading in the opposite direction.

Going into tomorrow’s game after another hard working performance fills us with more confidence that we are moving in the right direction.

The fact we are playing regularly with not much break is actually helping us to get a steady stream of performances after such a stop start nature to the first 3 months of the season.

We reported a clean bill of health after the game & also got Sam Warde back on the pitch which was a positive for us.