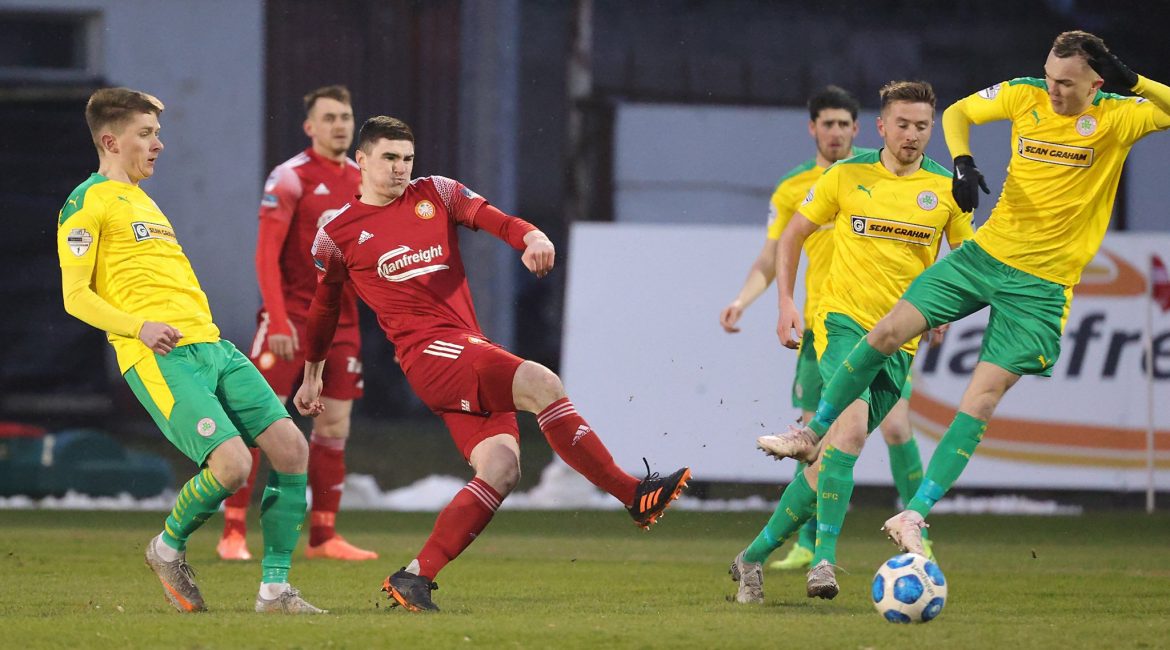 Our club volunteers at work all Saturday clearing the snow deserve massive credit for getting this evenings game played on a day which saw strings of postponements all across the country and were rewarded with another great performance by the men in red.

The first half was one of few chances which saw the majority of play in the midfield and the away side battling the wind on a freezing afternoon.

Ports youngster Oisin Conaty had an opportunity on twenty minutes through a whipped effort which ventured well wide of Aaron McCareys goal.

At the other end Cliftonville forward Rory Hale received a ball at the right side of the box from the Solitude sides new signing Paul O’Neill and had his effort blocked by the Portadown defence on 33 minutes.

Midway through the second half, Lee Bonis found space to run at the Cliftonville goal one on one with defender Ryan O’Reilly, however the referee Ross Dunlop stopped the attack in its tracks for a foul on the defender.

Later on Cliftonvilles Barry Coffey had a free kick from around 25 yards head well over the bar for the away side.

In the run up to half time Ben Tilney had a long range scooped effort fail to trouble the Cliftonville keepers goal.

The Ports had a penalty appeal on the edge of half time waved away after a great ball from Conaty found Lee Bonis
who went over in the Cliftonville box and the visitors cleared the danger.

In first half injury time a goal bound looping George Tipton corner was punched away by McCarey and the referee blew the half time whistle following the second corner.

Paul O’Neill proved a real threat to the Ports defence and straight away had a big opportunity overtaking Ports defender Paul Finnegan and going on a bombing run down the left hand side squaring to Hale whose shot was blocked by Eamon Scannell and scooped up by Ports keeper Carney.

O’Neill had an opportunity at the other side this time dispossessing Scannell however his effort was just wide of the keepers left post.

Cliftonvilles Ronan Doherty proved a threat from long range, hitting a 25 yard effort on 59 minutes which Carney dived to his left to save.

The visitors had a huge opportunity to take the lead when Carney saved a Hale effort from close range and the follow up from Ryan Curran was blocked by Paul Finnegan.

The visitors had their breakthrough on 61 minutes. A deep ball into in the box found Hale who turned and fires a left footed volley into the top corner to give the away side the lead.

There was a case of Dejavu for the Ports, chasing an equaliser into the 15 minutes of a game and today required them to turn the screw and get at the Cliftonville defence. They had an opportunity to do so when an incredibly dangerous free kick into the box substitute Sam Warde wasn’t met by any of the Ports front line and cleared late on by the visiting defence.

Carney was called into action courtesy of a Ronan Doherty distance effort again, making a great fingertip save to send the effort for a corner.

Cliftonville had a penalty shout on 76 minutes through the appeal that Hales cross across the box came off the arm of Ports defender McCallum with the referee waving it away.

Going into the last ten minutes the Ports pressed for that equaliser, a super ball from Ben Tilney found substitute Stephen Murray who had the ball in the net but it would not stand for an offside call.

Into stoppage time the Ports equaliser would arrive, Ports defender Adam McCallum rose highest to met a Ben Tilney corner for his third goal of the season.

The Ports had a massive chance to win the game, when a powerful run from Lee Bonis who released the ball to Stephen Murray who was left one on one with the keeper, Cliftonville defender O’Reilly did brilliantly to take the sting out of the effort.

Referee Ross Dunlop then blew for full time in a game that came alive in the final quarter of the game.
Full time score: Portadown (McCallum 90’) 1-1 Cliftonville (Hale 61’)

Our next game is this Tuesday night at home to Glentoran at 7:45pm. The game can be following live on BBC NI Sport & BBC Iplayer