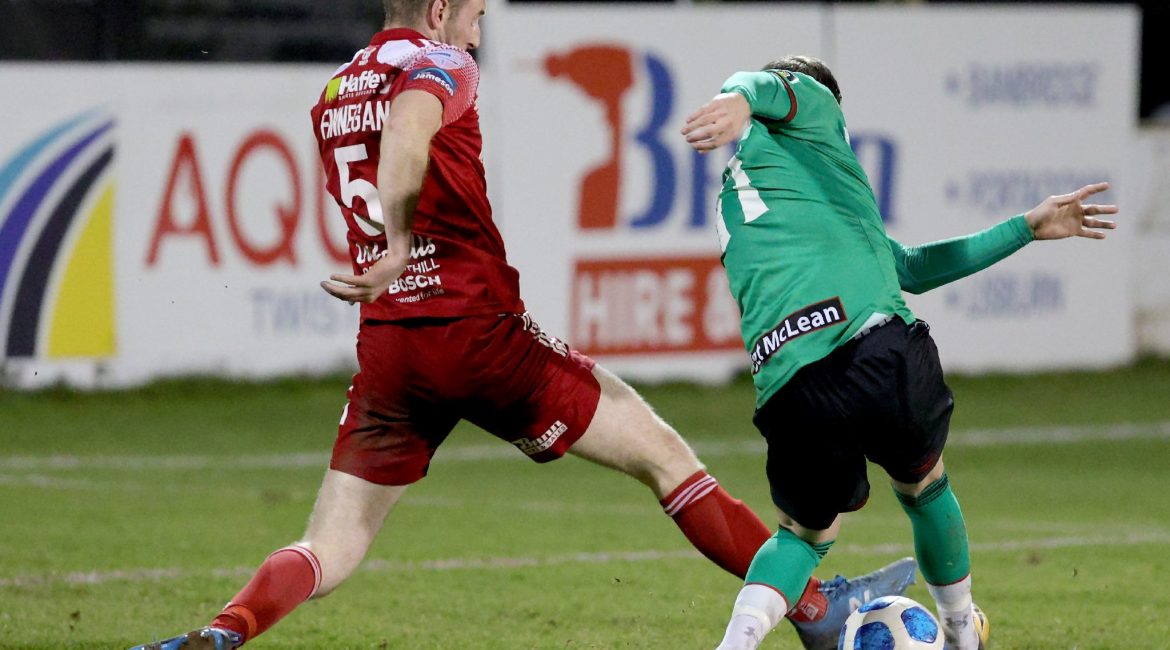 Portadown were defeated 3-1 at home to Glentoran on Tuesday night in what was their first defeat in three games and the visitors first away win of the season.

The visiting side started with aplomb on 2 minutes, a low pass from Hrvoje Plum connected with Robbie McDaid whose cross found Conor McMenamin who stretched to hit a volleyed effort past Jacob Carney to make it 1-0 to the Glens.

At the other end the Ports had an opportunity when a Sam Warde free kick was flicked on by Stephen Taggart and spilled by Glens keeper Dayle Coeling and collected at the second time of asking for the Gibraltarian.

The Ports had another opportunity when a slightly over hit Eamon Scannell cross found Greg Hall at the other side who sends a low ball to Ruairi Croskery who at close range forced a parried save from keeper Coeling.

The Glens had a massive chance to make it two when a ball into the box from Plum was cleared only to the path of McMenamin who rattled a shot off Carneys left post.

The visitors had a penalty on 28 minutes when a bolting Jay Donnelly run down the right side drew out Ports keeper Carney who unsuccessfully tried to dispossess the forward at the edge of the box, who sent the ball to McDaid whose headed effort deflected over the bar off the hand of Greg Hall. Andrew Davey thus brought out the red card and awarded a penalty which Plum converted to make it 2-0.

A mistake from Ports keeper Carney on 36 minutes saw his goal kick land straight at the feet of Donnelly which left him clean through on goal, however the Englishman kept out his effort with his feet, and Plums follow up effort went wide.

On the brink of Half Time the visitors looked in total control in the push for three, midfielder Dale Gorman had a long range dipping volley on the roof of the net

Portadown pulled a goal back on 50 minutes when Lee Bonis dispossesed McClean and rounded the keeper Coeling to put the ball into an empty net for his 5th goal.

Soon after Carney had to be alert to catch a stinging effort from McMenamin from the edge of the box with the winger proving a handful throughout the 90 minutes.

On 54 minutes once again Carney had to be alert to this time tip a long range effort from Conor McMenamin past the past.

On 57 minutes an incisive through ball into the box from McMenamin was deflected by the Ports defence to Donnelly, with midfielder George Tipton then making a great block to deny the strikers goal bound effort.

Soon after from a corner Paddy McClean had a great chance to make it three, the ball rebounded to the head of the full back who failed to find the right accuracy on his header that would have found been beyond Carneys reach.

The visitors got their third goal when Plum latched onto the end of a powerful pass before squaring the ball across the box, Adam McCallum couldn’t get enough on it to clear the danger and the ball fell to Jay Donnelly who tapped into the bottom right
to put the result beyond doubt.

Going into the final quarter of the game the men in red struggled to impose themselves on a Glentoran side who dominated possession, they had an opportunity when a 25 yard free kick from Gael Bigirimana deflected off the Portadown wall and onto the roof of the net.

In the dying minutes Bigirimana hit a powerful effort from the edge of the box in an attempt to make it four, forcing a save from Carney who once again impressed.
The game ended 3-1 to Glentoran, on a night the Ports defended resolutely however the red card and penalty was very much a tipping point in determining the course of the match.

Our next game is this Saturday 20th February when Dungannon Swifts make the journey to Shamrock Park. The game will take place at 3pm.