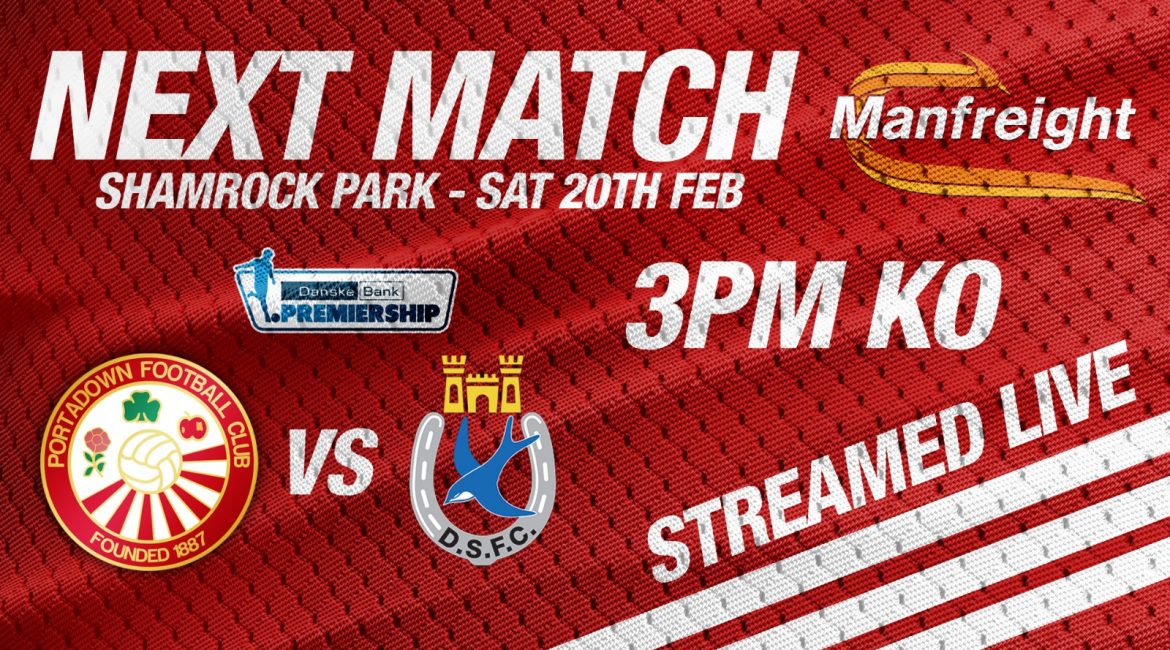 Portadown are back in Danske Bank Premiership tomorrow (20 Feb) when we take on Dungannon Swifts at Shamrock Park, kick off 3pm.

Dungannon Swifts are coming off the back of a 1-1 draw with Warrenpoint Town on Tuesday evening while the Ports were on the end of a 3-1 defeat to Glentoran at Shamrock Park, the Ports first reversal in four Premiership games.

Former Portadown midfielder Dixie Robinson takes temporary charge of Dungannon Swifts until the end of the season after another former Portadown player in Kris Lindsay left his role as manager by mutual consent last night. Lindsay, 37, became the Swifts’ manger in September 2019 after Rodney McAree moved to Coleraine and guided the Swifts to ninth place in last seasons curtailed Danske Bank Premiership.

The last time the two clubs met was back in December 2020 with the Ports running out 3-0 winners at Stangmore Park thanks to goals from Stephen Teggart, Adam McCallum and Barney McKeown, the last time the two sides met at Shamrock Park was back in March 2017 with Dungannon Swifts winning the game by a goal to nil thanks to a strike from former Ports winger Peter McMahon. For Portadown’s last victory over Dungannon Swifts at Shamrock Park you’ve to go back to 17 December 2016 and a 2-0 win thanks to goals from Mark McAllister and Stephen Hughes in Niall Currie’s first home game as Portadown manager, the game saw both sides reduced to 10 men in quick succession with Chris Hegarty dismissed for the Swifts and Keith O’Hara seeing red for Portadown.

Matthew Tipton spoke to the Portadown media team ahead of tomorrow game and had the following to say:

Another home game comes at us quickly tomorrow after such a long time away & looking at the weather our most important “player” will be Jack Moffett again.

Tuesday was tough both mentally & physically for the players. Being down to 10 men for such a long period forced the concentration levels to be at the very peak that we can ask & added to that the physical work needed to cover the ground of an extra player. Full credit to all of the players they gave everything asked of them & not one moan from any of them in terms of aches & pains.

We will miss Greg tomorrow through his one game suspension & also George through concussion.

What this does is give us opportunity to blood young(er) talent into the squad & onto the bench. Over the past month or so we have had Reece Jordan 15, Harry Murphy 17 & Zach Cowan 15 all on the bench as well as James McCammon 16, Isaac Baird 16 & Sam Glenfield 15 training with us. If they all keep progressing as they have been doing then I’ve no doubt there will be a few debuts given to these young lads over the rest of the season.

Match is available to stream live via WE ARE PORTS TV LIVE at https://www.247.tv/niprem