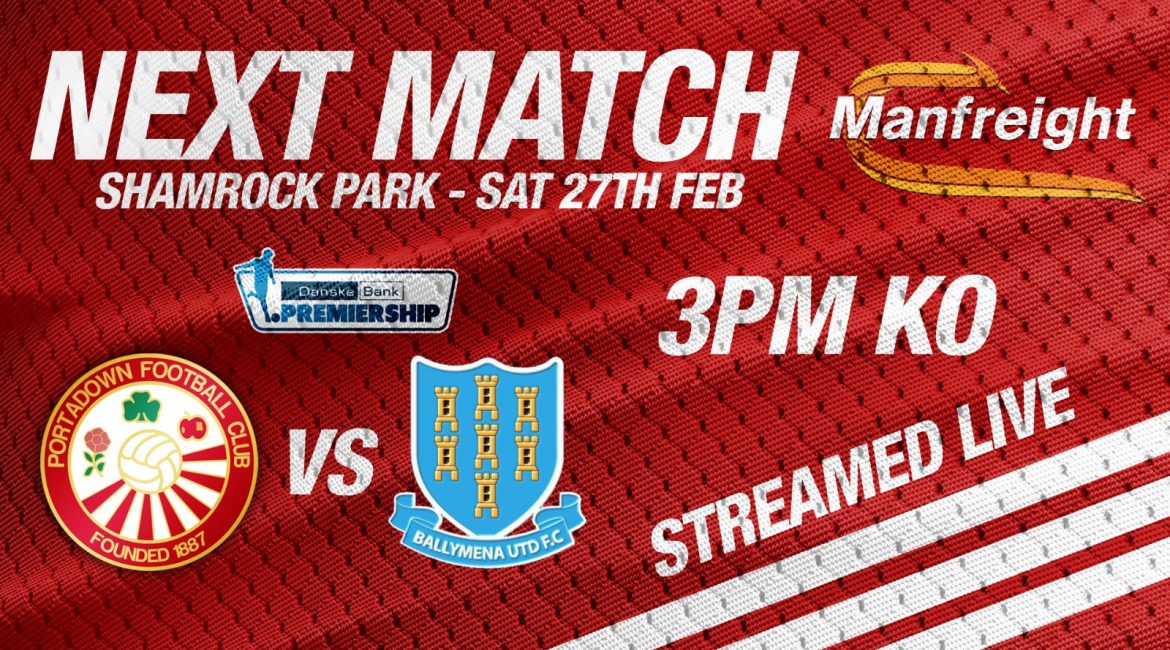 Portadown are back in Danske Bank Premiership tomorrow (Sat 27 Feb) when we take on Ballymena United at Shamrock Park, kick off is 3pm and the game will be streamed live on We Are Ports TV LIVE via the 247.tv platform at a cost of £7.

Portadown have seen their last two Premiership fixtures fall victim of the weather with our last game being a 3-1 defeat to Glentoran on 16 February at Shamrock Park, Ballymena United on the other hand have lost their last five Premiership games and are coming off the back of a 2-1 defeat to Cliftonville on Tuesday evening past.

The last time the two clubs met was back in December 2020 at Shamrock Park when they played out a 0-0 draw. In fact Ballymena have won six of the last seven meetings in all competitions between the two clubs with the Ports last victory over the Braidmen coming back in October 2015 when goals from Ken Oman, Sean Mackle and Peter McMahon sealed a 3-2 win with current Portadown manager Matthew Tipton among the Ballymena goal scorers.

The media team debuts their new 30 minute ‘Matchday Live’ programme which will be live and for free over on our We Are Ports TV Youtube channel ahead of tomorrows game. On air from appox 2:05pm and lasting appox 30 minutes Mark Beattie and Jonny Dunlop will bring you live team news as it comes in, discuss the game, have live interviews with both managers as well as speaking to other guests about the game, the show will then go off air before the live stream starts over on 247.tv at around 2:50pm.

We are looking forward to getting back playing again tomorrow after the two postponements this week. I think everyone knows how disappointed I was to not get last Saturdays game on but there was no complaints from me with Tuesdays call off as the pitch was like a flowing river at stages.

Whilst disappointed that both games were off it was probably a blessing in disguise to get a bit a freshness back into the legs of the players after a tight schedule of 8 games in 21 days. We hope that transpires into a good performance tomorrow.

Tomorrows game will be live streamed by We Are Ports TV LIVE via https://www.247.tv/niprem