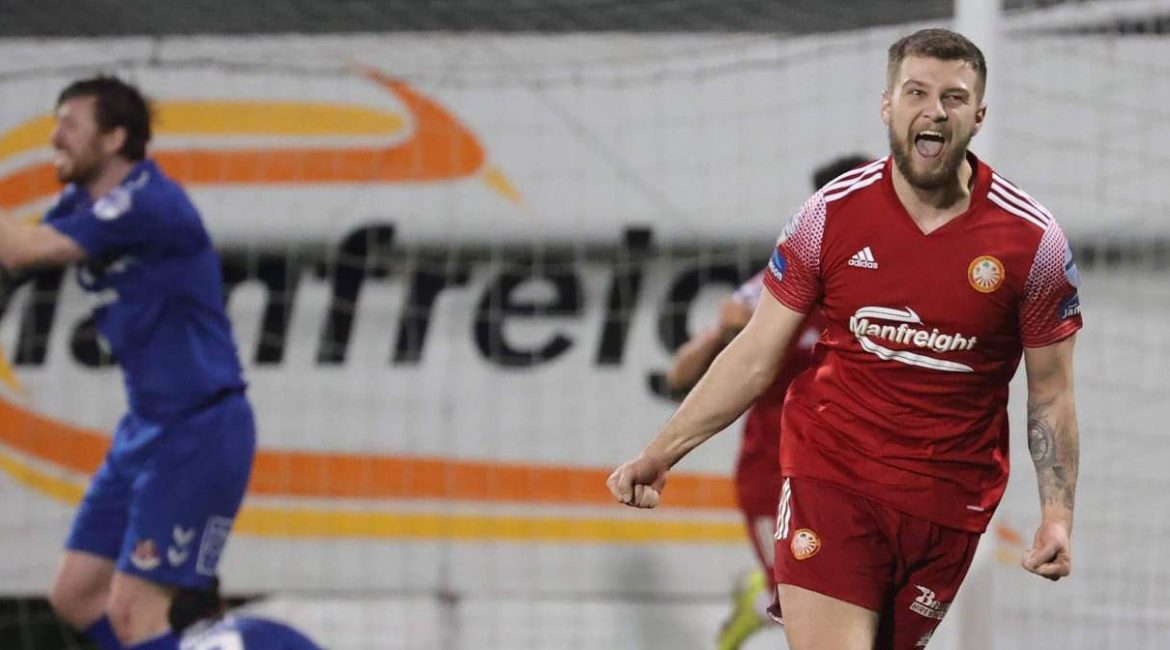 2 quickfire goals in the 79th and 80th minutes for Crusaders saw Portadown fall to a 2-1 defeat on Tuesday evening at Shamrock Park.

The away side made two changes following their 1-0 defeat to Glentoran on Saturday. Chris Hegarty, Robbie Weir come in for Rodney Browne and Ross Clarke.

The first real effort of the game arrived on 12. A 40 yard free kick from Portadown midfielder Sam Warde free kick was too high to test Sean O’Neil in the Crusaders goal.

Minutes later Adam Salley teed up striker partner Bonis with a header, with the latter beating two defenders in a great 20 yard run before hitting a shot just wide of the post.

On 18 minutes substitute Ben Kennedy lined up a free kick from 20 yards in which he curled just over the bar.

A minute later Portadown had another opportunity when Ruairi Croskery found space down the left side from a Lee Bonis pass, before sending a low cross to Ben Guy whom sent his effort over the bar for a goal kick.

On 34 minutes the away side had an opportunity when a Jarlaith O’Rourke shot lands at the feet of Philip Lowry, who turns and shoots with Ports keeper Carney making a brilliant save to put the ball out for a corner.

Into the second half Portadown had an opportunity on 56 minutes when a long range effort from Adam Salley was gathered with relative ease by Sean O’Neill.

Portadown would have the opening goal on 63 minutes when a clearance landed to Adam Salley in the box whose effort hit the back of the net via a deflection from Declan Caddell for the strikers 51st goal in a Portadown shirt.

As the visitors pushed for an equaliser Portadown had a good opportunity on the counter attack led by Ben Guy who found Adam Salley with the strikers effort heading wide of the post on 71 minutes.

On 79 minutes Crusaders would be on level terms when Aidan Wilson headed the ball into the net from a corner.

A minute later the visitors would be in front, substitute Jordan Owens would pick up the ball inside the box and curl it into the bottom corner.

On 87 minutes the visitors had an opportunity to extend their lead to three when referee Stephen Gregg awarded them a penalty, after adjudging that Greg Hall committed a foul on Adam Lecky. Jacob Carney would dive to his right to save McGonigles penalty and keep the score at 2-1.

Our next game is this Saturday 3rd April away to Glentoran. Kick off will be at 3pm and the game can be found live on https://www.247.tv/gaa/niprem