Defeat in East Belfast for Ports 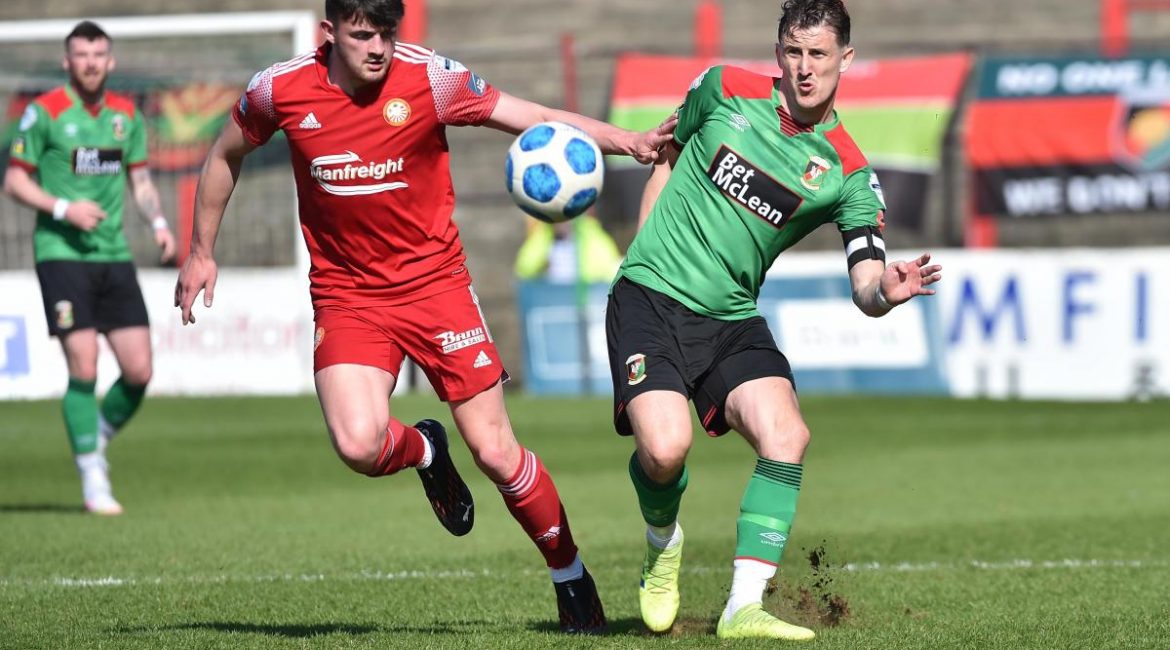 Portadown fell to a 4-0 defeat to Glentoran on Saturday afternoon at the Oval with goals coming from Rory Donnelly (x2), Robbie McDaid and Andrew Mitchell.

Going into the game the home side made 1 change to their starting line up from their win last Saturday against Crusaders, with Robbie McDaid coming in for Jamie McDonagh who is on the bench today.

Portadown saw 2 changes from the side in which played Crusaders on Tuesday night. Gareth Buchanan made his first start for the club replacing Jacob Carney who is on the bench and just before kick off Barney McKeown came in for Adam McCallum.

The first half was one of few opportunities for either side, with the home side having a chance on 15 minutes when Robbie McDaid sent a header just wide of the post following a Hrvoje Plum corner.

The opening goal would come for Glentoran on 35 minutes, Rory Donnelly picked up the ball on the right side, before cutting in and curling a shot into the top corner from the edge of the box to make it 1-0.

3 minutes later the hosts went close to doubling their lead, this time a cross from Caolan Marron found the head of Plum who sent his header straight into the hands of Gareth Buchanan.

Into the second half Portadown had an opportunity on 50 minutes when captain Luke Wilson sent a header from a Ruairi Croskery corner wide of the post.

On 53 minutes Marshall and McDaid combined for the home side to allow an opportunity for the latter on the right side of the box however the former Glenavon man McDaid sent his effort well wide.

Soon after Marshall and McDaid combined again, this time Buchanan making the save to deny McDaid. The danger was not away however as soon after McDaids attempt, Marron sent a ball into the box in which landed at the feet of Rory Donnelly, who sent his effort wide of the post.

As the hosts pressured to increase their lead, Jay Donnelly sent a header from a Marcus Kane delivery just past the post.

On 64 minutes Ports keeper Buchanan was on hand to make a great save to deny Marshall from close range after being teed up by McDaid.

Soon after it would be 2-0 and McDaid would get on the scoresheet when a Kane delivery landed kindly for the forward who made no mistake from close range.

On 66 minutes Jay Donnellys ball found Plum at the edge of the box with the Croatians effort saved by Buchanan.

As the game went into the closing stages Portadown were presented a chance when the referee awarded a free kick in a dangerous position from around 20 yards, Sam Warde stepped up however sent his free kick into the Glentoran wall.

On 81 minutes the home side made it 3-0, with substitute Jamie McDonaghs cross finding the head of Rory Donnelly to put the ball past the keeper at the far post.

On 84 minutes it would be 4-0, this time substitute Andy Mitchell received the ball at the edge of the box before curling a shot into the bottom corner giving Buchanan no chance.

Portadown nearly had a goal back on 89 minutes, with Sam Warde picking out Lee Bonis with a pass, with Lees shot just wide of the post.

Our next game is on Tuesday 6th April when we take on Larne at Shamrock Park. Kick off is at 7:45pm and the game can be found at http://www.247.tv/niprem