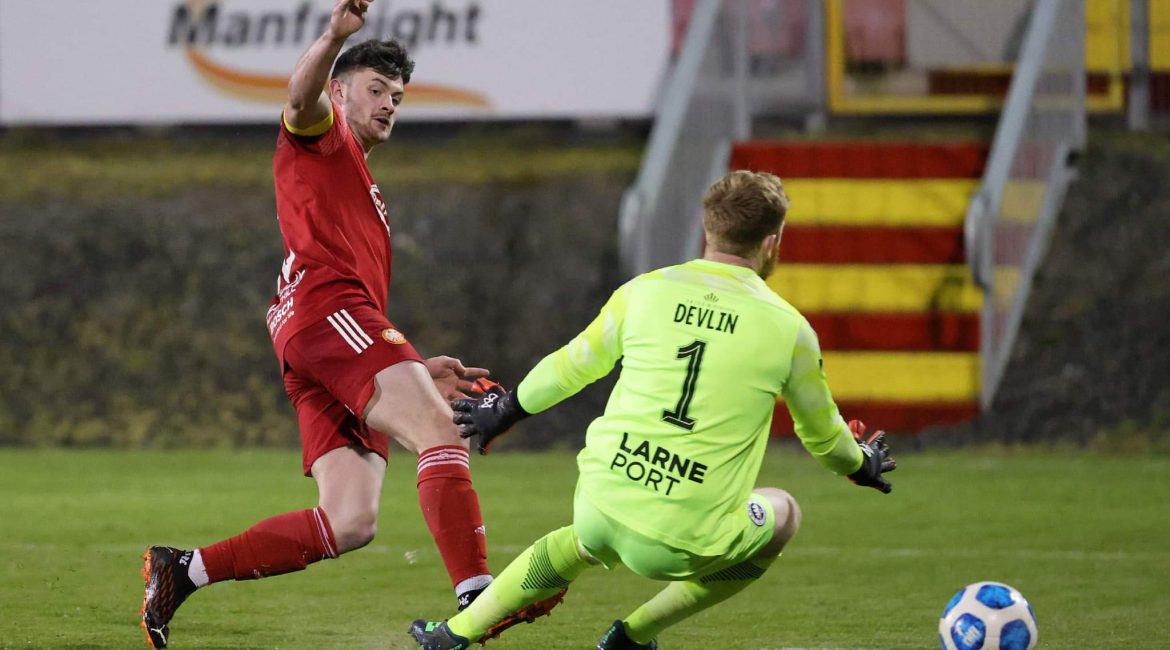 Portadown were defeated by 2 goals to 1 on Tuesday evening at Shamrock Park with goals from an Andrew Mitchell penalty, Lee Bonis and Ronan Hale.

Going into the game Portadown made 3 changes from Saturdays defeat to Glentoran. Jacob Carney, Paul Finnegan and Oisin Conaty came in for Gareth Buchanan, Ben Tilney and Ben Guy.

The visitors made just the 1 change from their 3-0 win over Carrick Rangers on Saturday, with Dean Jarvis coming in for the injured Graham Kelly.

The away side were awarded a penalty on 8 minutes when the assistant flagged for a handball by Croskery who had blocked Cosgroves cross. Andrew Mitchell stepped up and converted from the spot to make it 0-1 to Larne.

Minutes later the visitors had a great chance to make it 2, Marty Donnelly and Lee Lynch combined to find David McDaid with a pass, with the striker sending his effort over the bar.

The 24th minute saw an injury blow for the Ports with Luke Wilson having to be stretchered off following a tackle on John Herron. After around an 8 minute stoppage the game resumed with George Tipton coming on for the Portadown captain.

On 42 minutes the visitors had a good opportunity when a Donnelly cross connected with John Herron, whose header came off the top of the post and out for a goal kick.

Donnelly then had an opportunity from range on the brink of half time however his effort was straight at Carney in the Portadown goal.

As the 4th official signalled for 8 minutes of stoppage time in the 2nd of those 8 minutes Portadown would have their equaliser. A ball from Ruairi Croskery found Lee Bonis who tapped past the keeper from close range. Referee Lee Tavinder had played the advantage after Croskery was fouled by Albert Watson in the build up to the goal.

At the start of the second half Larne were forced into a substitution themselves, with Jeff Hughes replacing Albert Watson who hobbled off following an injury late in the first half.

On 50 minutes a good Portadown move saw Sam Warde tee up Ruairi Croskery whose side footed effort from the edge of the box lacked enough power to seriously trouble Conor Devlin.

On 52 minutes Larne full back Cosgrove had a decent effort from around 30 yards saved by Jacob Carney who dived to his left to collect the ball.

On 59 minutes Larnes Lee Lynch found Luke Wade-Slater in a good position in the 18 yard box however the latter couldn’t hit the target with his effort.

On 60 minutes there were appeals for a Portadown penalty when following a Sam Warde delivery, Cosgrove appeared to have impeded Ruairi Croskery in his attempt to get to the ball with the referee having no interest in the claims.

On 63 minutes following a run from Oisin Conaty, who did well to beat Josh Robinson with a step over, an attempted Larne clearance resulted with a low long distance effort from Greg Hall which was deflected wide of the post.

On 70 minutes Larne would restore their lead when John Herron found Ronan Hale with space on the right side, with Hale hitting an incredible first time half volley straight into the top corner of the net.

On 72 minutes the visitors nearly increased their lead when a Josh Robinson ball into the box found Hale with Jacob Carney doing well to tip the goal scorers effort over the bar.

On 81 minutes the visitors had another good opportunity when following a good run, Lee Lynch found Ronan Hale with a ball with Hale sending his acrobatic half volley wide of the post.

As Portadown applied pressure in the last 10 minutes in search of an equaliser, a George Tipton free kick into the box was cleared into the path of substitute Stephen Teggart, who sent his low drive wide of the post.

A minute later Portadown went close again when a deep ball into the Larne box was headed on to Greg Hall, with Halls attempted lob going just over the bar.

The referee then blew the full time whistle with the three points going back with the visitors.

Our next game is this Saturday 10th April against Carrick Rangers at Shamrock Park. Kick off is at 3pm and the game can be found live on http://www.247.tv/niprem