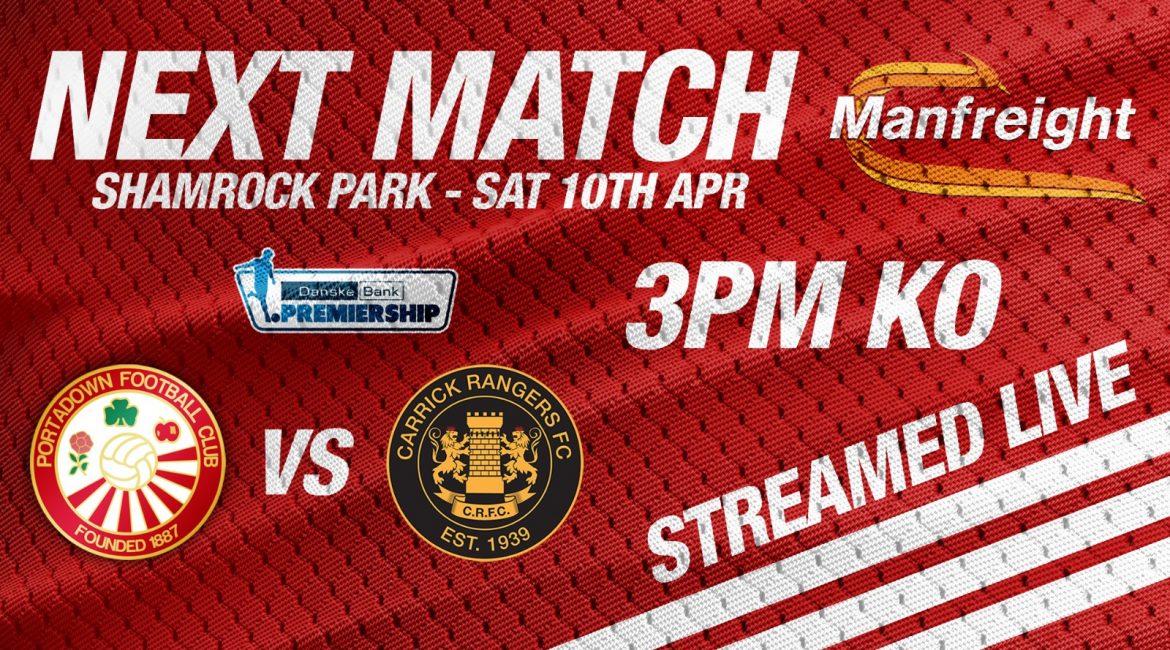 Portadown are back in Danske Bank Premiership action tomorrow (Sat 10 April) when we take on Carrick Rangers at Shamrock Park, kick off 3pm.

Carrick Rangers are coming off the back of a 1-1 draw with Crusaders on Tuesday evening at the Loughshore Hotel Arena while Portadown were on the end of a 2-1 defeat to Larne at Shamrock Park.

The last time the two clubs met was back on Tuesday 23rd March at the Loughshore Hotel Arena with Carrick Rangers running out 5-3 winners after Portadown had taken an early two goal lead.

Portadown have a wretched recent record against Carrick Rangers losing seven of the last nine with our last victory against them coming back in April 2016 when we were 2-1 winners at the Loughshore Hotel Arena thanks to goals from Chris Casement and Garry Breen.

Portadown’s record at Shamrock Park against Carrick Rangers however is far better with only one defeat in the past 10 games.

An interesting stat involving the two sides comes on the penalties front with Carrick Rangers having been awarded seven this season with defender Caolan Loughran having despatched all seven while Portadown have only been awarded the one spot kick, that was against Glenavon with Sam Warde scoring – on the other hand Portadown have been on the end of 10 penalty decisions against them this campaign.

Obviosuly our main injury concern is Luke Wilson who had a scan this morning so we await the results of that and hope for some good news.

Paul Finnegan came through Tuesdays game ok and with Eamon Scannell having completed another few sessions and Adam McCallum looking strong again after his knocks and niggles we are nearly back to full strength again.

We Are Ports TV LIVE will be streaming tomorrows game live via https://www.247.tv/niprem

Last Five Head to Head at Shamrock Park (All competitons)