Cup defeat for Ports in Ballymena 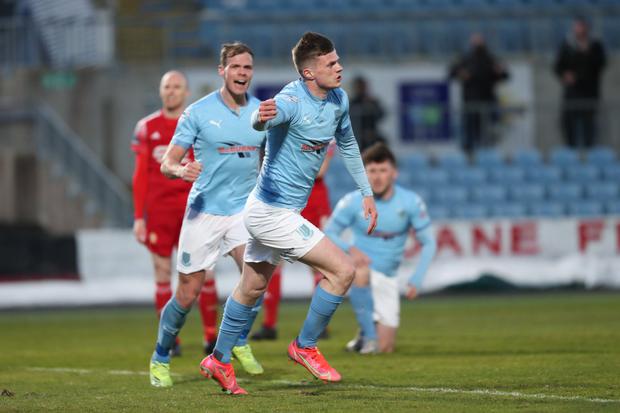 Portadown fell to a 4-1 defeat on Tuesday evening away to Ballymena United in the Sadler’s Peaky Blinder Irish Cup.

The home side made 4 changes from their 2-1 defeat to Coleraine at the weekend, with Kofi Balmer, Andy McGrory, Leroy Millar and Ryan Waide replacing Jonny Addis, Sean Graham, Ben Wylie and Owen McKeown.

The home side would go in front on the 4th minute, when McElroy picked up a misplaced back pass from Finnegan to stick the ball past Carney.

On 8 minutes a 40 yard George Tipton delivery from a free kick found the head of Lee Bonis who put the ball just over the bar.

On 27 minutes Ports striker Adam Salley had a free kick from distance which failed to trouble United keeper Williamson.

On the 40 minute mark the Ports would get the equaliser when marksman Lee Bonis latched onto the end of a long ball from Nathan Kerr before putting the ball past the keeper for the equaliser and his twelfth goal of the season.

Two minutes later the home sides lead would be restored, when a dinked effort from Ryan Waide from the left side of the box hit the back of the net beyond the reach of Jacob Carney.

On 43 minutes Lee Bonis had a low shot from around 20 yards gathered by Williamson in the United goal.

In stoppage time in the first half Lee Bonis was presented with an opportunity when he got on the end of an Adam Salley header with United goalkeeper Williamson denying Bonis the opportunity to double his tally. Ben Tilney then struck the top of the post from the resulting corner.

On 52 minutes the home side had an opportunity when a deep ball from McElroy found the head of Josh Kelly whose header from a tight angle was saved by Carney.

On 56 minutes United would add to their lead through a Paul McElroy scissor kick from close range to make it 3-1 after he got on the end of a Shay McCartan header.

Portadown had an injury blow on 70 minutes when midfielder Barney McKeown pulled up clutching his hamstring and thus was replaced by Stephen Murray.

On 76 minutes the referee pointed to the spot adjudging that Stephen Teggart fouled Paul McElroy in the box, with Shay McCartan stepping up and dispatching the penalty to increase the home sides lead to 4-1.

On 79 minutes Adam Salley picked up the ball on the right side and had an effort which failed to hit the target.

On 82 minutes for the home side, Andy McGrory had a whipped effort from close range go over the bar following a McElroy cross.

Into stoppage time the home side had a free kick from range rattle the post from Shay McCartan, with substitute Ryan Harpur trying unsuccessfully to put the ball over the line with the referee then blowing the full time whistle.

Our next scheduled fixture is this Saturday 1st May against Warrenpoint Town at Shamrock Park. KO is 3pm and you can catch the game live on https://www.247.tv/gaa/niprem