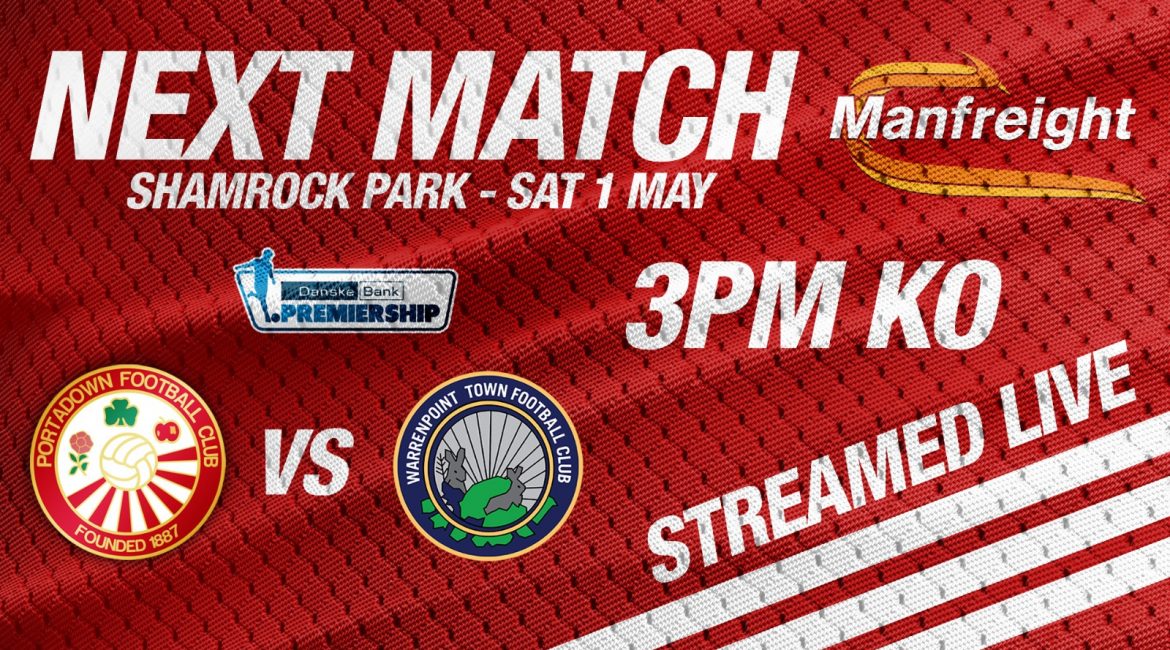 Portadown are back in Danske Bank Premiership action tomorrow (Sat 1 May) when we take on Warrenpoint Town at Shamrock Park, kick off 3pm.

It’s only a week since the two sides met at Milltown, a game which saw Portadown secure their first ever victory on Warrenpoint Town’s home patch with goals from Ben Tilney and a Adam Salley brace giving the Ports a 3-1 win to secure their grip on 9th place in the Danske Bank Premiership.

Warrenpoint Town come into the game without a win in their last thirteen Danske Bank Premiership games however progressed to the next round of the Irish Cup with a 2-1 win over Championship side Ballyclare Comrades on Tuesday evening, Portadown on the other hand exited the Irish Cup following a harsh 4-1 defeat to Ballymena United but come into the Saturdays game with 4 wins in their last 5 Premiership games.

The last time the two clubs met at Shamrock Park was back in January with Warrenpoint Town winning 2-0 thanks to goals from Brandon Doyle and Ryan Swan, Portadown’s last victory against Warrenpoint Town on home turf came back in August 2015 with goals from Gary Twigg and Keith O’Hara securing a 2-1 success for Ronnie McFall’s men. In fact Warrenpoint have won the last four meetings between the sides at Shamrock Park, something manager Matthew Tipton will be looking to put a halt to tomorrow.

We play Warrenpoint tomorrow for the second time in a week & look to continue our recent good run in the league.

In terms of injuries Barney (McKeown) came off with a pulled hamstring on Tuesday night so is definitely out for tomorrow but we don’t know the full extent of it yet as he’s still in inflammation period. What my biggest frustration with Barney’s injury is that we were waiting to get a sub on to replace him.

George (Tipton) came off after suffering another blow to his foot so we will assess that before making a decision.

The game will be streamed live via We Are Ports TV LIVE at a cost of £7 via www.247.tv/niprem with former Portadown midfielder Richard Clarke on co-commentary alongside Mark Beattie

PSS Man of the Match Sponsor is J&J Packaging

Last Five Head to Head at Shamrock Park (All competitons)