Defeat for Ports against Point 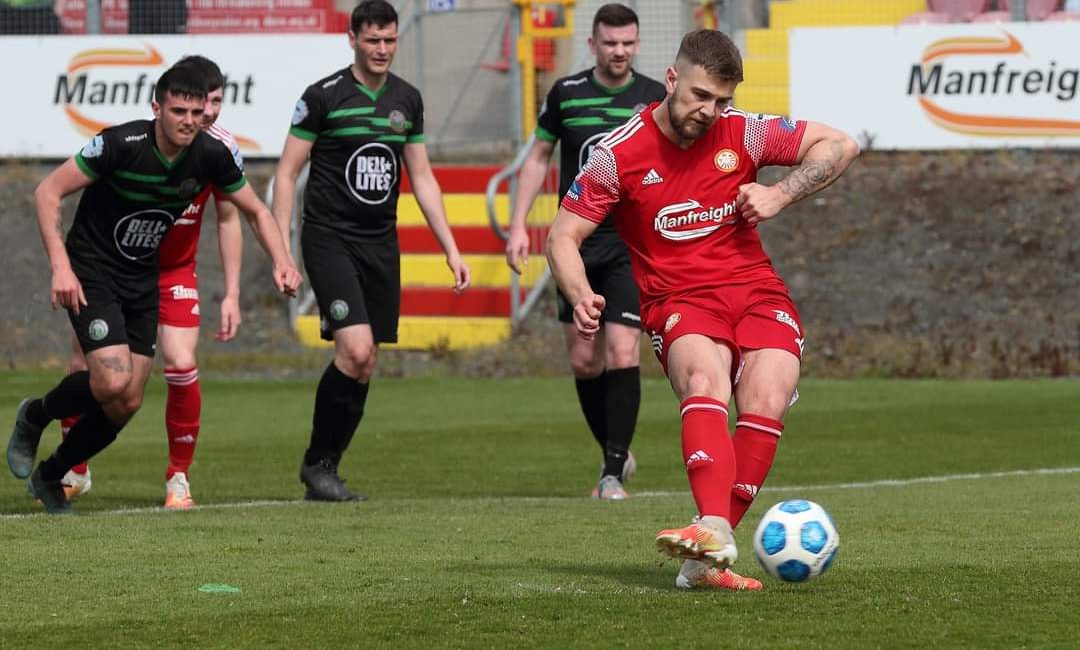 Despite an Adam Salley penalty on 17 minutes, Portadown fell to a 2-1 defeat this afternoon against Warrenpoint Town at Shamrock Park.

Whereas the visitors are concerned they made 2 changes from their win on Tuesday night over Ballyclare Comrades. Ben Mullen and Daniel Byrne replaced Colm Deasy and Brandon Doyle.

On 2 minutes Ports midfielder George Tipton had a free kick from 25 yards sail well over the bar.

On 10 minutes Warrenpoints Danny Wallace had a low shot from the edge of the box which was saved by Jacob Carney and put out for a corner.

On the 16th minute Portadown had a penalty when the referee adjudged that Hutchinson had impeded Paul Finnegan. Adam Salley stepped up from the spot dispatching the penalty to make it 1-0 to Portadown.

On 21 minutes Portadown could have had another spot kick when Point keeper Andy Coleman brought down Lee Bonis in the box following Salley dispossessing Point defender Ball, however the linesman flagged for offside on Lee Bonis in what was a massive let off for the visitors.

On 25 minutes Ryan Swans low shot from range was easily gathered by Jacob Carney in the Portadown goal.

Moments later Portadown had an opportunity when a low ball from Salley to the far post found Lee Bonis whose shot hit the side netting.

On 26 minutes Warrenpoint would have the equaliser, when Fra McCaffery put the ball into the back of the net from a tight angle, with appeals for a foul on Jacob Carney who had the ball in his hands before colliding with the Warrenpoint captain.

On 38 minutes Adam Salley hit a low free kick from around 30 yards which failed to trouble Andy Coleman.

On 39 minutes Portadown had a big opportunity when an attempted Danny Wallace back pass fell to the feet of Adam Salley just inside the box, with Point keeper Coleman making a good reflex save to deny Salley his second goal.

On the 46th minute Daniel Byrne had a placed effort from range easily caught by Jacob Carney.

On 49 minutes Warrenpoint went inches from taking the lead when Swan squared up O’Sullivan who sent his effort wide of the post.

On 62 minutes the visitors would take the lead when, from a corner a Swan header found O’Sullivan, who from close range stuck the ball in the back of the net.

On the 68th minute substitute Brandon Doyle had a long range effort fail to hit the target.

On 84 minutes Warrenpoints Adam Carroll had an effort in which failed to test Ports keeper Carney.

On the 86th minute Ports substitute Murray had a good opportunity sending an inviting ball into the box which just needed a foot on the end of it.

On the 90th minute Lee Bonis forced a diving save from Andy Coleman following a free kick at the edge of the box.

In stoppage time Portadown had an opportunity on the 92nd minute when Adam McCallum sent a whipped effort wide of the post.

We are back in action on Tuesday evening in the Danske Bank Premiership away to Glenavon with a 7:45pm KO. You can catch the game live on https://www.247.tv/gaa/niprem