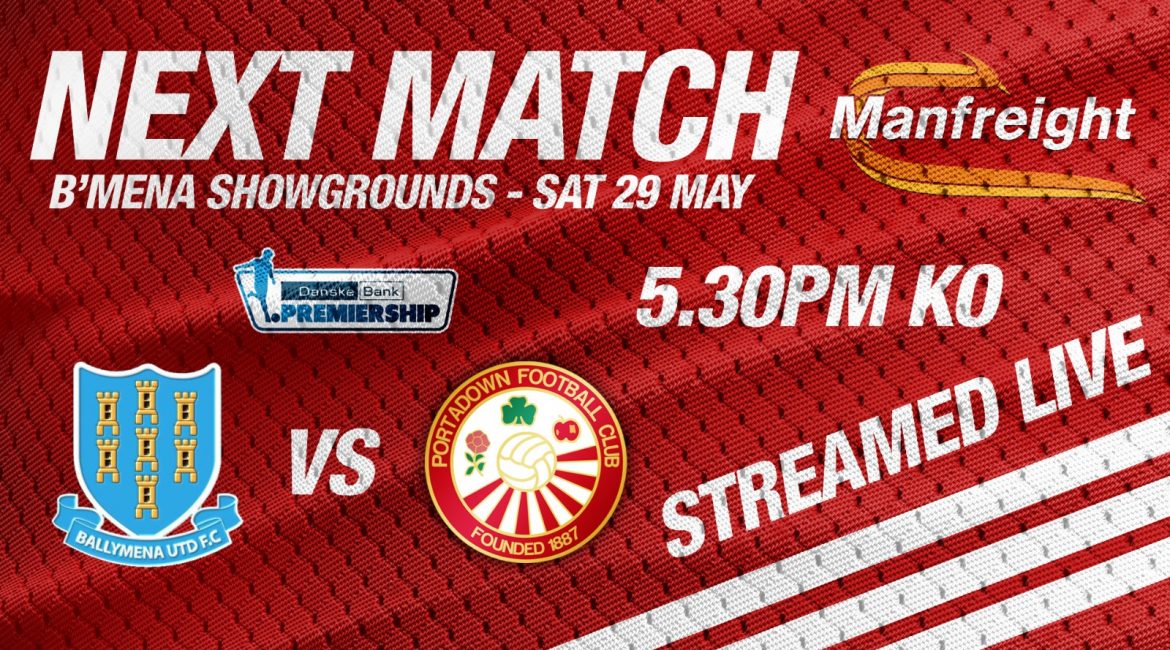 Portadown make the journey to the Ballymena Showgrounds tomorrow (Sat 29 May) to take on Ballymena United in the final game of this Danske Bank Premiership campaign, kick off 5:30pm.

Ballymena United come into the game following a 3-0 success against Warrenpoint Town on Tuesday evening, their fourth Premiership victory on the trot, while Portadown were 4-2 winners at Shamrock Park over Dungannon Swifts.

The last time the two clubs met was in April in the Irish Cup 1st round with David Jeffrey’s side running out 4-1 winners at the Showgrounds. The last time the clubs faced each other in the Premiership was in March with Ballymena United running out 2-1 winners thanks to goals from Shay McCartan and a Paul McElroy penalty, Luke Wilson was on target for the Ports. In fact Ballymena have won nine of the last eleven meetings in all competitions between the two clubs with the Ports last victory over the Braidmen coming back in April 2016 at the Ballymena Showgrounds when we ran out 2-0 winners thanks to goals from Ken Oman and Matthew Parker. Portadown also have a pretty dismal record at the Ballymena Showgrounds with only one victory in our last 12 visits dating back to 2013.

This is what Portadown manager Matthew Tipton had to say

Final game of the strangest game of the season tomorrow & I’d be lying if I said I’m not looking forward to the break. What I’d also say is we have been tremendously privileged to be in a position all year to be able to train & play therefore having a semblance of normality in these testing times for everyone.

I’ll use these notes to place on record my thanks to the directors, media team & all of the volunteers who dedicate so much unseen time to make everything run as smoothly as possible on a match day, whilst you guys are doing so much work it’s rarely seen by anyone but it’s much appreciated by myself.

Finally to the players & staff thank you so much for all of your endeavours over the whole year. It’s been tough at times & demands have been placed on everyone that sometimes have been unattainable however we have come through it & now we can move forward & grow together to improve next season.

Enjoy your break everyone & hopefully see you all soon

There will be a stream of the match live at https://ballymenaunitedfc.tv/live/ – You’ll need to create an account for the site and make a single payment of £7.50 via Paypal, Debit Card or Credit Card.

Last Five Head to Head at Ballymena Showgrounds (All competitions)