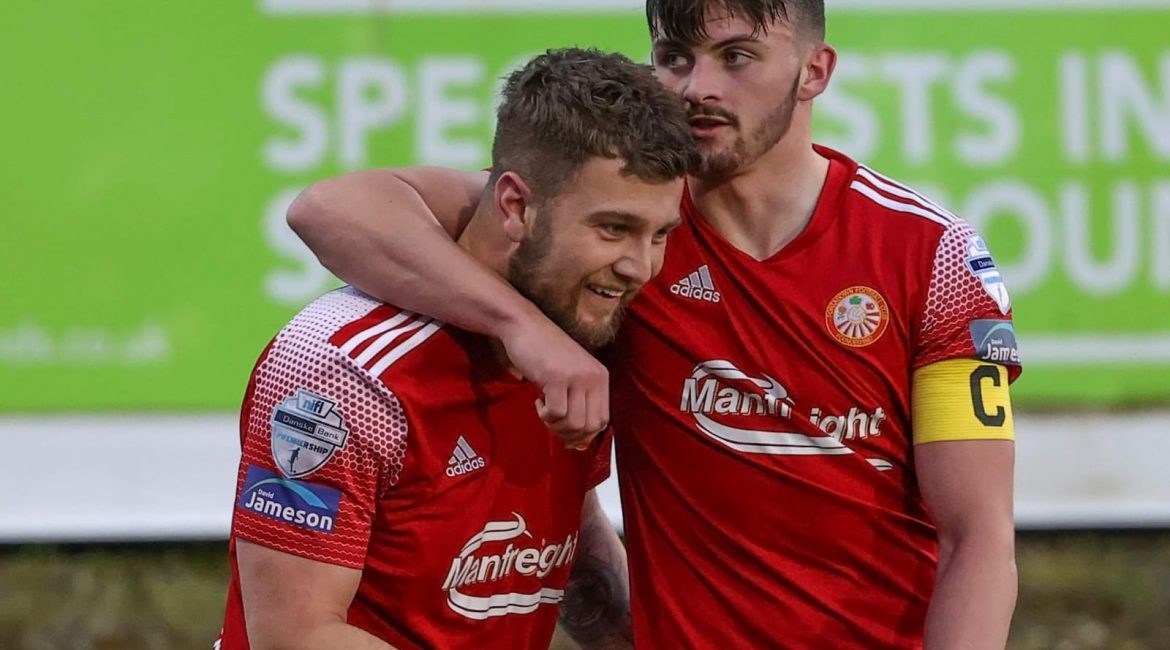 Portadown defeated Dungannon Swifts 4-2 on Tuesday evening thanks to a brace from Adam Salley and goals from Lee Bonis and Adam McCallum in a result that, barring a 13 goal swing in goal difference from Warrenpoint Town, secures 9th place for the Ports in the Danske Bank Premiership.

Going into the game Portadown manager Matthew Tipton made no changes to the starting lineup from our last game which was a 2-1 win over Carrick Rangers on the 15th May.

The visitors made four changes from their defeat to Ballymena United on the 15th May, with Roy Carroll, Rhyss Campbell, Ryan Mayse and James Convie coming in for Sam Johnston, Ben Gallagher, Shane McGinty and Ethan McGee.

On 8 minutes Ben Tilney picked up an attempted Matthew Smyth clearance on the volley however sent his effort over the bar.

On 12 minutes Dungannon had a good opportunity when Rhyss Campbell picked up a long range pass before having a low shot which was gathered by Jacob Carney.

On 18 minutes Adam Salley picked out Lee Bonis with a great pass, however Lee sent his effort in the box wide of the post.

On 27 minutes Portadown would have the opening goal when Lee Bonis found Greg Hall with a ball into the box, before the full back headed the ball into the path of Adam Salley who stuck the ball in the bottom right beyond the grasp of Roy Carroll.

On 35 minutes Dungannons Oisin Smyth picked up the ball from outside the box before having his effort from range saved by Jacob Carney.

On 48 minutes the visitors had a good opportunity when Ryan Mayse received the ball on the right side before having a shot from a tight angle cannon off the post.

Two minutes later the visitors would be level when James Convie got on the end of an underhit Adam McCallum back pass which allowed the Dungannon man to slot the ball past Jacob Carney from close range.

On 53 minutes Dungannon would have the lead when Rhyss Campbell from the wing cut inside before sending a low shot that nestled in the bottom corner from around 20 yards.

As Portadown looked now to get back in the game they had an opportunity when Adam Salley picked up the ball from a corner and had his shot blocked by the Dungannon defence on 55 minutes.

On 62 minutes Ben Tilney picked up a misplaced pass from Ethan McGee and had his shot from the edge of the box parried away by Swift’s keeper Roy Carroll.

Adam Salley on 69 minutes had an opportunity when he attempted a shot from 25 yards out, however it was well off target.

Portadown would have the equaliser on 72 minutes when a Lee Bonis free kick from the edge of the box went into the back of the net via a deflection off the Dungannon wall to make it 2-2.

On 80 minutes it would be 3-2 to Portadown, when a Jacob Carney goal kick found the path of Adam Salley through on goal who stuck the ball into the back of the net for his 11th goal of the season with Carney being credited with the assist.

On 83 minutes Ports keeper Jacob Carney had to be on hand to parry away a shot in the penalty area from Ethan McGee following a corner.

On 87 minutes it would be 4-2, when Adam McCallum connected with a Sam Warde corner to send a powerful header into the back of the net to put the win beyond doubt.

The 90th minute also saw manager Matthew Tipton give young Reece Jordan his debut who came on for Sam Warde.

Following a period of stoppage time the referee blew for full time which was received by a cheer from the crowd in attendance.

Our final game of the season is this Saturday 29th May away to Ballymena United with a 5:30pm KO. Unfortunately no Portadown supporters will be permitted to attend this fixture however it will be live streamed by https://ballymenaunitedfc.tv/

Man of the Match: Adam Salley