Defeat for Ports in season closer 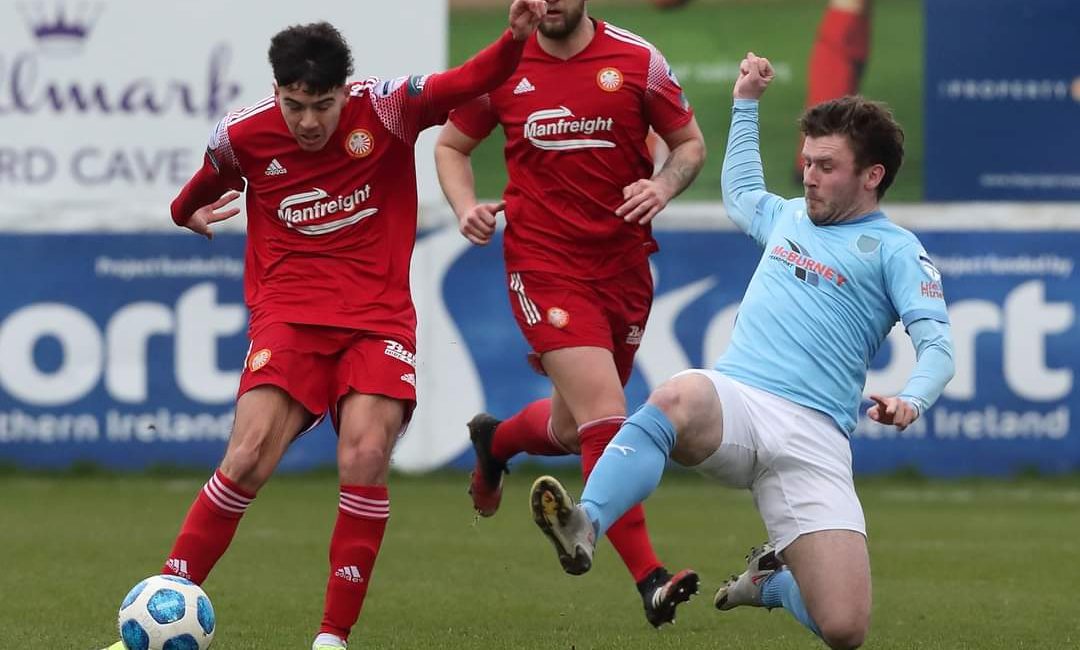 Portadown fell to a 4-2 defeat on Saturday evening away to Ballymena United to close out the 2020/21 Danske Bank Premiership season.

Ballymena United going into the game needed to win and Glenavon to lose to Dungannon Swifts in order to secure the final European play off place and thus named a completely unchanged line up to the side that defeated Warrenpoint Town 3-0 on Tuesday night.

After 45 seconds Portadown would be 1-0 in front when Connor Keeley’s attempted clearance was deflected into the net by Ruairi Croskery for his first goal in a Portadown shirt.

The Ports started the game the brighter side and had an opportunity on 6 minutes when Stephen Teggart did well to bring down a Chris Lavery cross before firing wide of the keepers right post.

A minute later it was nearly 2-0 when an Adam McCallum header from a Sam Warde corner was cleared off the line by the Ballymena United defence.

On 14 minutes the home side would have the equaliser when Shay McCartan connected with a Ryan Waide cross to send a header past the keeper for his 18th goal of the season.

On 19 minutes Ballymena had an opportunity when Trai Hume sent a header from a corner over the bar.

On 23 minutes Portadown retook the lead when midfielder Sam Warde, from a tight angle stuck a free kick into the bottom corner from just over 20 yards for his third goal of the season.

On 27 minutes United had an opportunity when Leroy Millar found Sean Graham with a pass before the former Blackpool man had a shot from outside the box just wide of the post.

United went close to getting the equaliser on 29 minutes when an attack led by captain Jim Ervin saw the veteran pick out Paul McElroy with a pass whose shot rebounded off the post.

On 32 minutes Ballymenas Trai Hume was denied an opportunity to test the keeper by a great Reece Jordan tackle from close range after a Ryan Waide cross.

On 42 minutes it was 2-2, Linfield loanee Hume cut inside from the right to finish past Gareth Buchanan from just inside the box.

On 43 minutes Portadown nearly retook the lead when an unmarked Oisin Conaty popped up with a shot from close range that creeped wide of the post.

As half time approached Ross Redman had an opportunity for the home side when his free kick from the right side was punched away from danger by Buchanan.

Into the second half the home side threatened on 47 minutes when Ryan Waide forced a fingertip save from Gareth Buchanan to push the former Linfield mans shot past the post.

Soon after,  an inviting ball from Connor Keeley was inches away from the head of Waide who just needed to make a connection with the ball to score.

On 55 minutes Sean Graham for the hosts found himself in a good position inside the box, however his attempted shot went harmlessly out for a goal kick.

On 57 minutes from just inside the box Leroy Millar attempted to place an effort for the top corner however Paul Finnegans block denied the striker the chance deflecting the ball for a corner kick.

On 63 minutes Millar had an angled outside of the box free kick from the right side straight at Gareth Buchanan in the Portadown goal.

Soon after at the other end, Portadowns Chris Lavery picked up the ball and went on a great run taking on Jim Ervin before hitting a shot into the side netting.

On 66 minutes it was 3-2 to the home side, Sean Graham’s header found the path of defender Connor Keeley who wriggled into space before finding the top left corner with a powerful strike from around 25 yards out.

Four minutes later United increased their lead when a ball to the back post from Sean Graham found substitute Ryan Harpur who headed into the net to give the home side some breathing space.

Portadown nearly pulled a goal back when substitute George Tipton had an effort  inches wide of the post on 84 minutes.

On 87 minutes Stephen Murray found some space in the box but his shot was gathered by Ross Glendinning.

On 88 minutes 15 year old Tommy Smyth came on for Nathan Kerr giving him his first league appearance for the Ports.

In the last few seconds as the final whistle approached Ruairi Croskery had a shot from just over 20 yards trickle wide of the post.

After one minute of stoppage time the referee blew the full time whistle which brings an end to our 2020/21 Danske Bank Premiership season with the Ports finishing 9th in the league with 36 points.