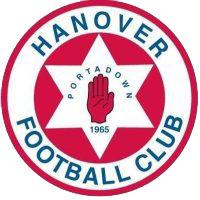 Portadown continued their PreSeason last night with a 5-0 win in the semi final of the George Richardson Memorial Cup against Hanover. Due to pitch restrictions the game took place at Craigavon City’s ground in Drumgor Road, Craigavon and it was a slow start for the Ports who dominated the ball but where kept at arms length by a hard working Hanover side. Ports finally got off the mark thanks to what is becoming a familiar connection, Geroge Tipton whips in a corner and Paddy McNally nods it home from 8 yards out. The game then opened up for the Ports as probably the best goal of the game seen Callum Ferris work an opening down the left hand side and play a precise pass to the on rushing Luke Wilson who finishes neatly. Towards the end of the half a lung bursting run from Stephen Teggart seen him brought down in the box and the referee pointed to the spot, Aaron Duke stepped up and slotted the penalty home.

The second half seen a host of personel changes but Ports kept up the same intensity and command of the ball, Brendan Glackin got on the end of a neat through ball to finish well into the bottom corner. Ports final goal came from the spot again as a Hanover defender handballed a cross into the box, this time Adam Salley stepped up and finished cooly.