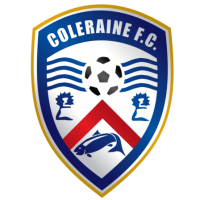 Portadown rounded off their Pre-Season fixture list as they welcomed Coleraine to Shamrock Park, the game started off with Coleraine dominating possession with slick play from Dean Sheils but the Ports stood firm and rarely looked troubled. As the Ports grew into the game they got the first goal as a long throw in from Aaron Duke was punched clear by the visiting goalkeeper but his clearance only found Christopher Crane who drilled low into the bottom corner that Micheal Doughtery couldn’t keep out.

The visitors got the equaliser as a short back pass from Crane was picked up by Jamie McGonigle who knocked it passed the onrushing Bobby Edwards to slot home. After 8 substitutions for the home side, some adjusting was expected but the new look side took no time settling and looked to get on the front foot in the game, after Callum Ferris was fouled just outside the box, George Tipton stood up to deliver a pinpoint cross that met a fantastic run by Lee Bonis who placed his header perfectly passed the diving Dougherty to restore the Ports lead.

Portadown kick off their league fixtures this coming Saturday 3rd August as we travel the short journey to face Loughgall at Lakeview Park for a 3pm Kick Off.