The Ports vs The Welders 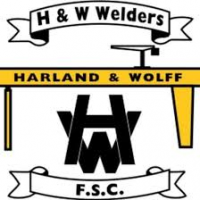 Portadown welcomed H&W Welders to Shamrock Park on Saturday 24th August as they looked to continue they return to winning ways having overcame Knockbreda the previous week and it wasn’t long before they got on the front foot, Adam McCallum rising highest to meet a George Tipton free kick but his header went narrowly wide. Luke Wilson’s tenacity and quick footwork found him with room in the box at the by line where he found a pass to Lee Bonis but the strikers shot lacked power and was cleared by a desperate defence.

From the resulting corner the Ports opened the scoring as Tipton’s pinpoint cross was met by Bonis who headed into the ground and the ball bounced over the despairing dive over Ryan Miskelly. 2 goals in 2 games for the young Portadown striker has been the perfect start to his career back at Shamrock Park.

Adam Salley almost got in on the act as he made a run down the right channel that was found by McCallum and he unleashed a powerful drive from a narrow angle but his shot was parried by Miskelly to deny last week’s hat trick hero. With Conal McGrandles controlling the midfield he picked up a loose pass from Welders, found the energetic Stephen Teggart who played the ball through to Bonis, he beat his man before shooting from distance which his effort going narrowly passed the post and wide.

Welders had their only real effort on goal just before half time when they earned a free kick 4 yards outside the Ports box but while the effort was on target, it lacked any real power and was easily saved by Bobby Edwards. Ports finished the half on the front foot at Wilson again showing drive getting forward, beating a man inside the box and squaring the ball back in front of goal, Teggart got on the end of it, took a touch and fired towards goal but it was well saved low down by Miskelly.

The 2nd half started almost like the first, with Ports on top searching for a goal and within 3 minutes of the restart the Ports extended their lead. Teggart found a lovely ball to match the run of Bonis who reversed the ball to the on running Greg Hall who took a touch then finished low underneath the on rushing Welders keeper to wild celebrations for a player that rarely gets the spotlight but whose performances are so consistent and professional.

The home side looked to extend their lead when Wilson found a ball over the top to the on running Salley whose initial shot is saved but he manages to get on the rebound to diver the ball towards goal but a great saving clearance on the line denied the Ports striker.

Ports take all 3 points from the match up and move on to Tuesday night where they face Dollingstown in the 2nd round of the Bet McLean League Cup at Shamrock Park – KO 7.45pm.