With the return of the local men from the war, the clamour for senior football was growing. One man in particular was leading that bid for senior status, William A Mullen, the man responsible for coining the phrase “The Hub of the North” back in the late Victorian days when Portadown’s extensive rail network lead to all parts of Ireland. The many local junior clubs in the area put aside their rivalries to back the club in its desire to join the Irish League. This was a time of expansionism in Irish Football with the league keen to take the game beyond the boundary of Belfast. Finally after several years of preparation, Mr Mullen together with Tom Dawson and his committee met the League chiefs in June 1924 and were able top present a strong case for joining the league.  Their good work in winning friends and influencing people paid dividends and at long last Portadown became a member club of the Irish League together with the re-admittance of Belfast Celtic. The nucleus of the first teams to represent the club in senior football came from the local junior clubs who had supported the bid. Names such as Nisbet, Dinnan, Carraher, Boyd, Cochrane, Hunter. The name Portadown Athletic was retained as were the club colours of red shirts.

In 1936-37 we finished in fourth place in the league, followed by third place in 1937-38, fourth in 1938-39, and runners up in both the 1939-40 and 1940-41 seasons. With the curtailment of activities and the introduction of the regional league, Portadown soon dropped out of senior football until the end of the war. Most reports at the time suggested that The Ports were on the verge of greatness. During this period of success the Ports were rattling in the goals by the hatful and a look at our results shows victory such as  6-0 and 8-0 against our great rivals from Lurgan (where are they now!!) 8-0 away to Cliftonville, 7-2 at Larne, 7-0 against Newry and three results which really stand out, a 5-2 win against the Blues at Windsor in 1937-38  and our record away victory 9-2 at the Oval the following season, with another terrific 5-0 victory against Linfield coming in 1939-40.

Much of the credit for the upturn in the Ports fortunes is down to Tommy “Sticky” Sloan, the former Irish International and a member of the Cardiff City team that become the first and so far the only team from outside England to win the FA Cup, in 1927. Sloan who arrived at Shamrock Park from Linfield served the club with distinction as a player, manager, coach and trainer for 30 years.

Whilst the Championship proved elusive the Gold Cup found its way back to Shamrock Park in the 1937-38 season. Davy Cochrane had been in inspirational form in the semi-final against Derry City, but two weeks before the final he was transferred to Leeds United for £2,000.Without Cochrane Belfast Celtic were odds-on favourites to lift the cup. As was the case in their first triumph four years previously thousands of Port fans made the journey to Belfast at crammed into Grosvenor Road on a day of on stop rain. Goals from Gamble and Davy Cochrane’s uncle George brought the cup back to Portadown. That winning team was Black, McNally, McGurk, Cochrane, McMath, O’Kane, Kerr, Pearson, Gamble, Coull, Armstrong and Monaghan.

However, “The Title” still remained illusive, with Portadown finishing joint top in 1960-61 and 1961-62. On both occasions they lost a playoff against Linfield. Gibby Mackenzie left for South Africa and the clubs fortunes dived again. However in the late sixties he was persuaded to return to the club and he won the Gold Cup in 1971, Carlsberg Cup in 1973 adding the Texaco All-Ireland Cup in 1974. With victory in the 1979 Gold Cup there would be no more success for ten long seasons.

The turning point came in December 1986 with the appointment of Ronnie McFall as manager. McFall had played for Portadown on two previous occasions, sandwiched between spells at Dundee United and Ards. He left the club to play for and eventually manage Glentoran. Just over three years after taking the reigns, McFall guided Portadown to the long awaited Irish League Championship victory. The following season he went one better winning the double and adding the Ulster Cup and Budweiser Cup in an historic four trophy season. Numerous Cup Victories and two more League Titles have been added to Ronnie McFalls impressive CV, making him the most successful manager in the history of Portadown FC.

2012 marked the fifty anniversary of Portadown’s FC first venture into European competition, as well as the 125th anniversary of the club’s formation as a junior team back in those dim and distant Victorian days. Since then however the club’s fortunes have dipped and they find themselves playing in the Northern Ireland Football League Championship.

In 1887 the Mid-Ulster Football Association was established and in Portadown a group of young men set about forming a football club with the aim of taking part in the Mid-Ulster Cup. The first meeting took place in the Duke of Manchester’s school on Church Street. The club were formally named Portadown Athletic and early meetings of the committee were held in a dimly lit room at the Young Men’s Institute in Edward Street where club secretary William Mullen read the minutes by candlelight. The club’s first kit consisted of white shirts and black pants before changing to amber shirts and black pants. They eventually settled on Maroon shirts which give rise to their nickname, ‘The Reds’. Initially games were played on The Fairgreen and in the Public Park. In the following formative years the club had several grounds including at Tavanagh and Ripley’s Field, Armagh Road and Old Shamrock Park, located approximately where Clounagh Junior High School is now sited. It didn’t take them long to put some silverware in the trophy cabinet when they won the Irish Junior Cup, beating Larne 1-0 and a cup double was achieved with Portadown lifting the Mid-Ulster Cup for the first time. It was retained the following season and on a further six occasions before the outbreak of The Great War. The junior game was very strong in the town at this time and Portadown had to compete for talent with teams such as Edenderry Arrows, Greenview from Edgarstown, Portadown Celtic from The Tunnel and Parkmount. Early games were played in the Lurgan and District League as well as the Portadown and District League, The Mid-Ulster League which they won in 1900, the Irish Alliance League which they won in 1905 and Irish Junior League. In 1916 the new Irish Intermediate League was formed and Portadown were selected to be one of the inaugural member clubs. However before the start of the new season The Ports were forced to withdraw due to the high numbers of players and fans who had gone off to fight in The Great War. The club went into moth balls for several years after that.

So it was in August 1924 Portadown played their first senior game. Our opponents that day were Glentoran. Our First opponents at Shamrock Park were the Champions, Queens Island in a Gold Cup game which finished goalless.

What a fantastic first season it tuned out to be in the Irish League. We finished in fourth spot, two points behind Belfast Celtic with Queens Island taking the runners up position behind Champions Glentoran.

With an historic first season behind them the Ports settled well in the environs of senior football. Season 1925-26 saw a continuation of their consolidation including away victories at Champions Belfast Celtic and at Windsor Park against Linfield. That steady progress continued and with it came international recognition for the likes of Doherty, Blair and Johnston.

After only nine seasons in senior football Portadown lifted their first senior trophy, defeating Glentoran 1-0 at Solitude in the Gold Cup Final. Thousands of Factory workers took a half-day off work and travelled to Belfast by train. Around 5000 Ports fans were packed into Solitude to witness an amazing triumph. With only three minutes left and the scores tied at 0-0, William Kelly Johnston scored the winning goal amid scenes of wild celebration for the Ports supporters.

Had it not been for World War Two, Portadown would most likely have won the Irish League Championship half a century before they finally did, with the club finishing as runners-up in 1939/40 and again the following season in the Northern Regional League. In 1941 once more due to the constraints of war The Ports were forced to withdraw from the Northern Regional League. The reserves continued to play on, whilst several of the locals joined clubs around the town. With the end of hostilities in 1945 the club regrouped and in 1947 rejoined the Irish League.

Portadown have a long tradition of signing Scottish Players, dating back to their earliest days in senior football. In 1948, they appointed Scotsman Tommy Lipton as manager and he put together the famous Portadown “Scottish Team”. Ten of the first team in that side were Scottish. The 1950’s were not very successful, with a solitary Gold Cup triumph in 1953. In 1957 another Scot, Gibby Mackenzie, took charge at Shamrock Park, and performances improved drastically.

THE PORTS IN PICTURES 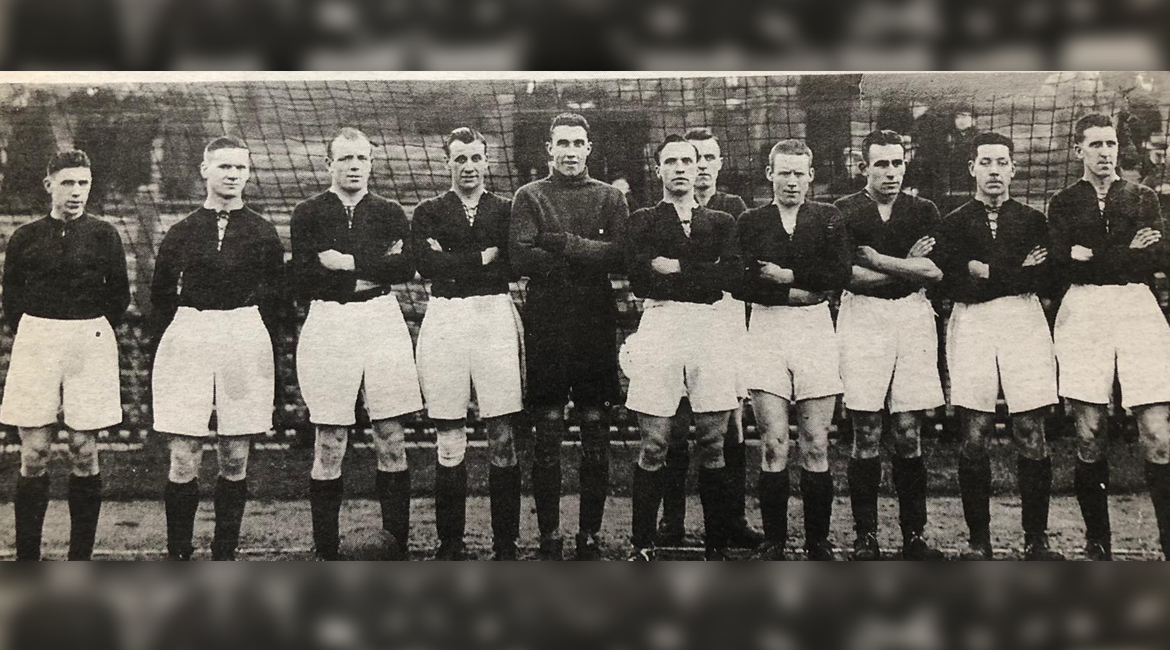 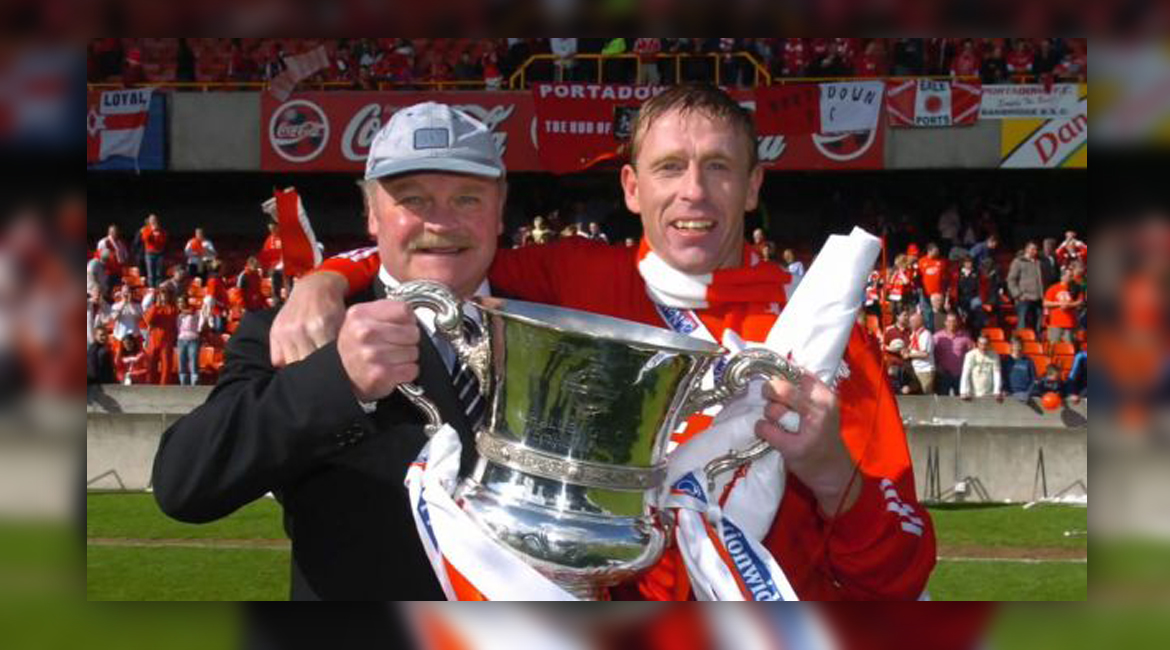 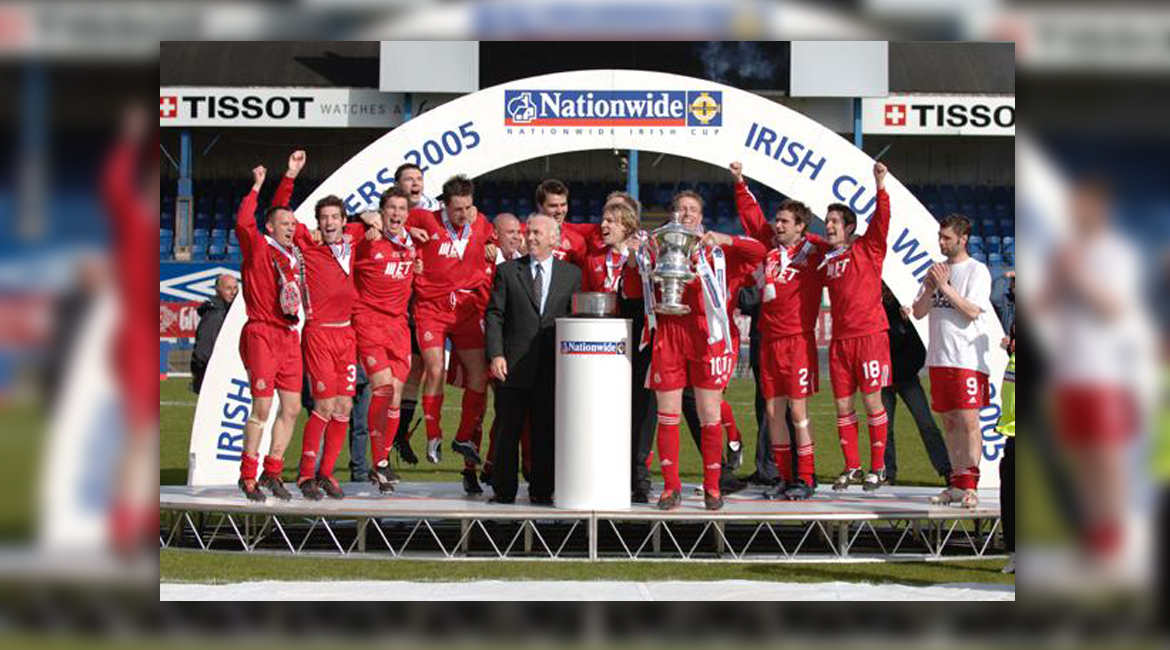 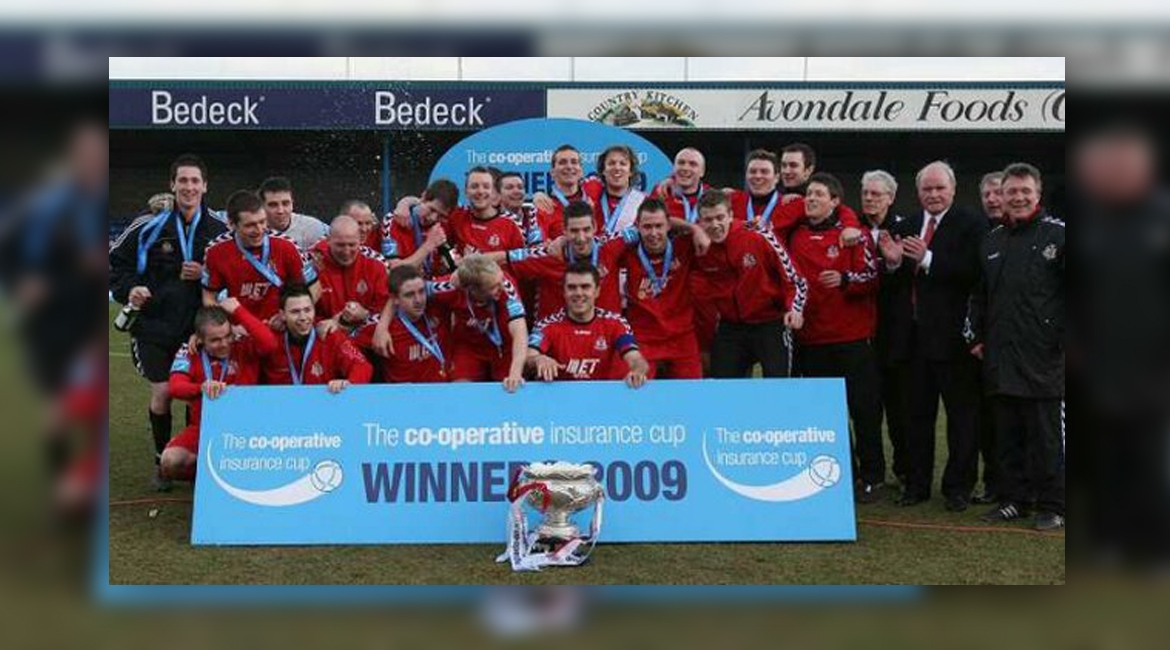 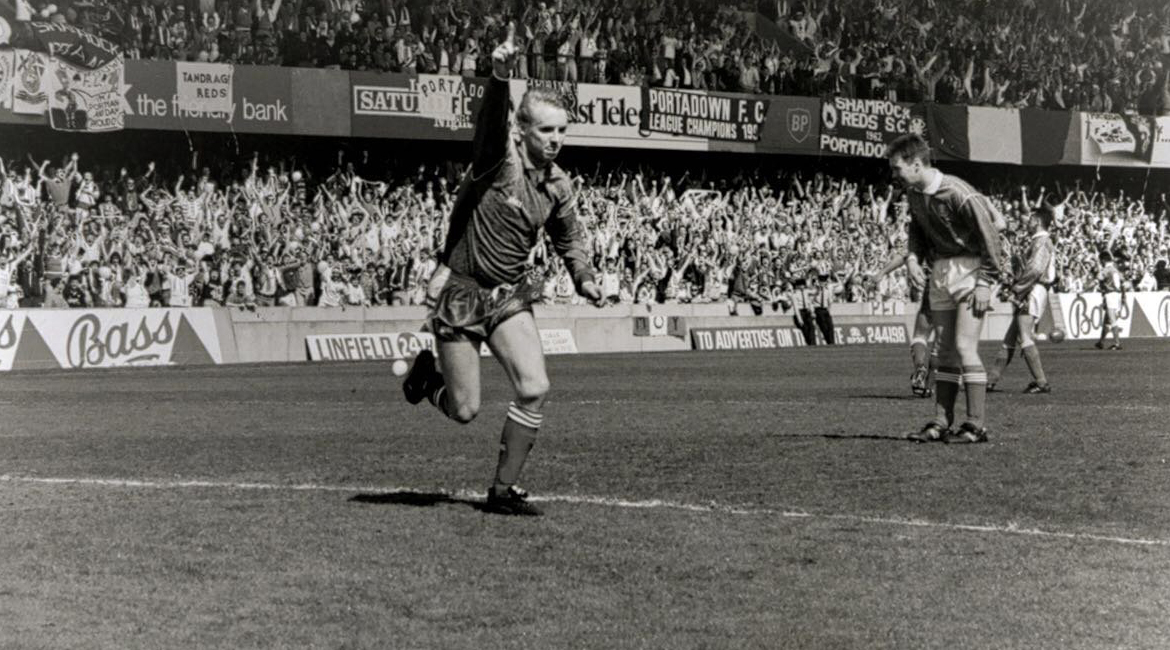 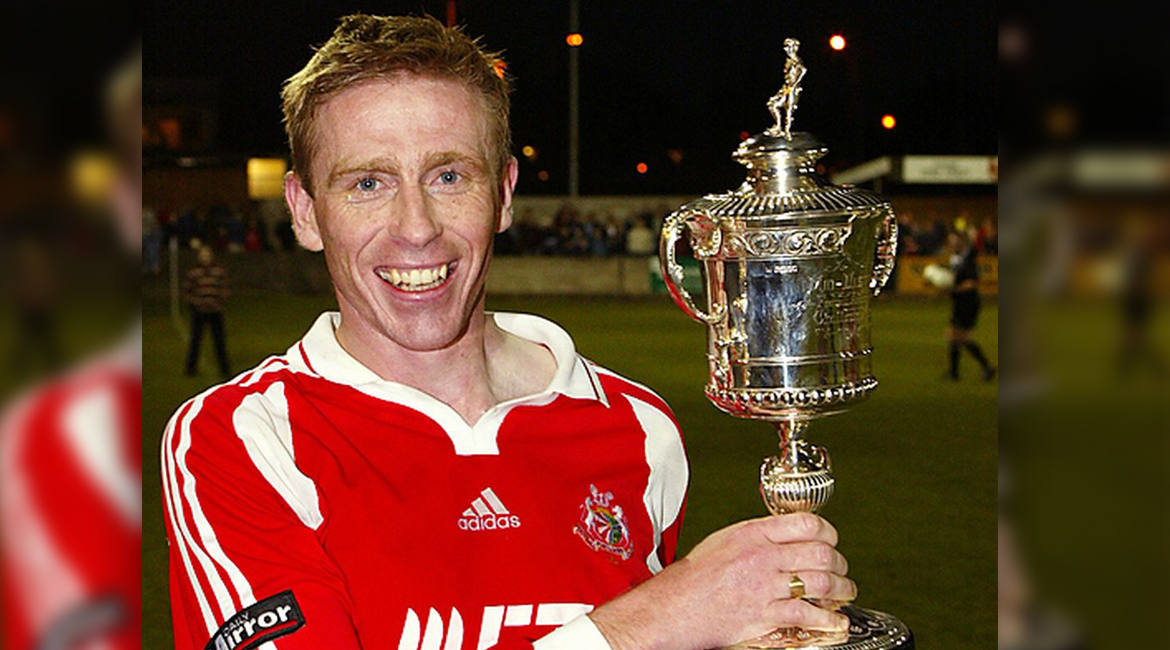 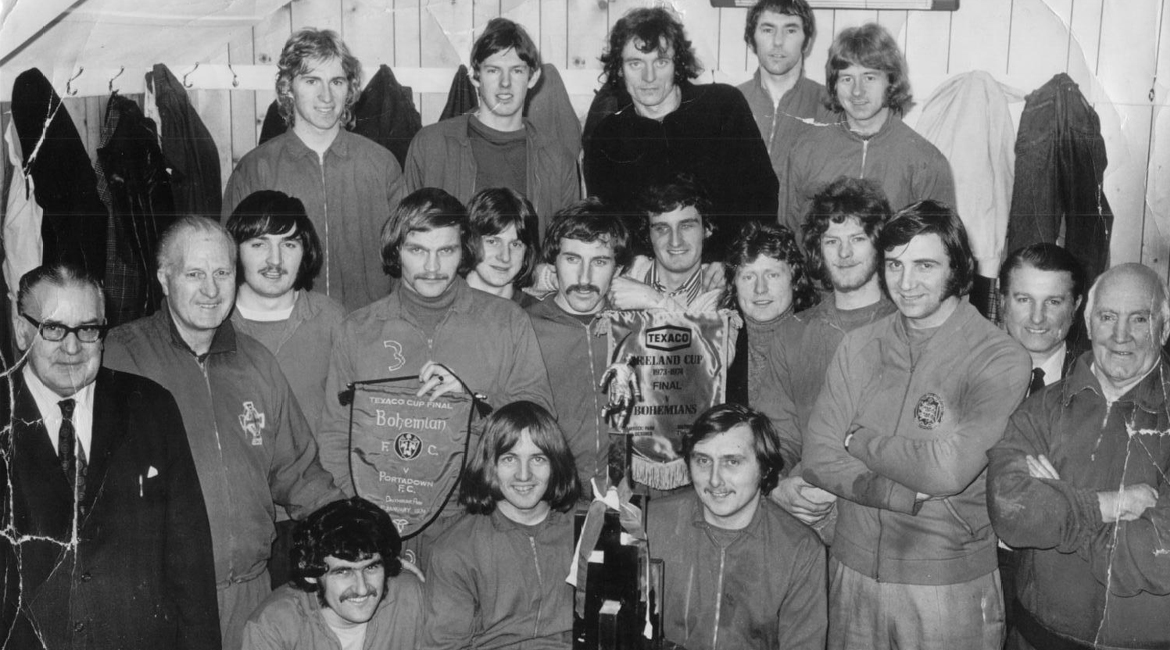 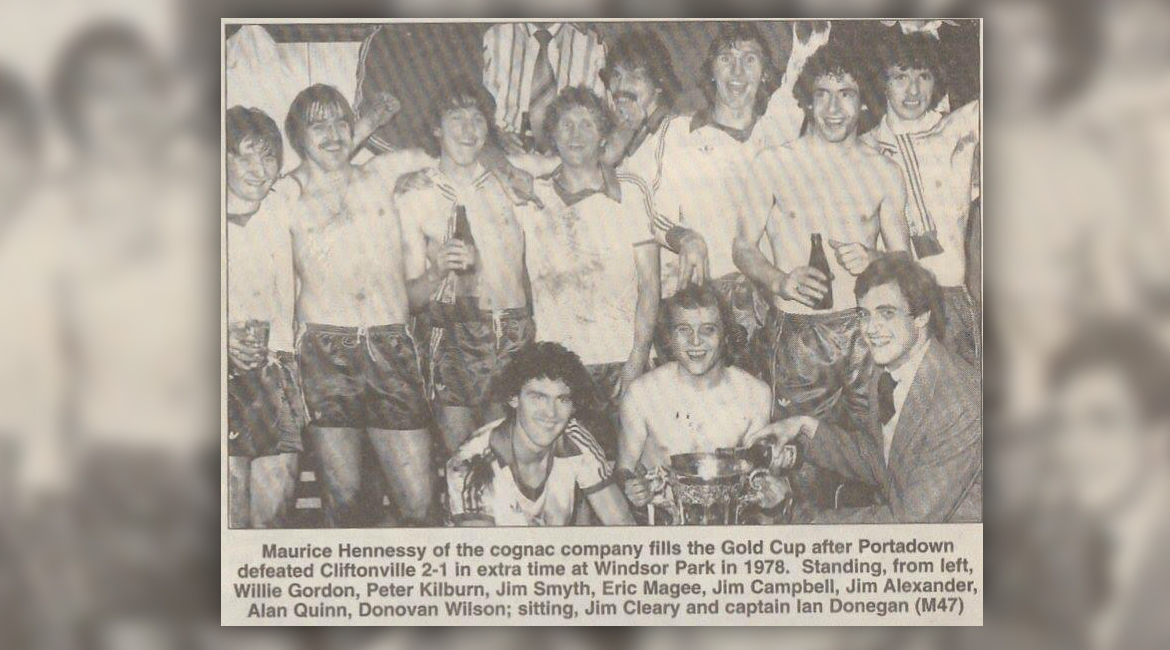 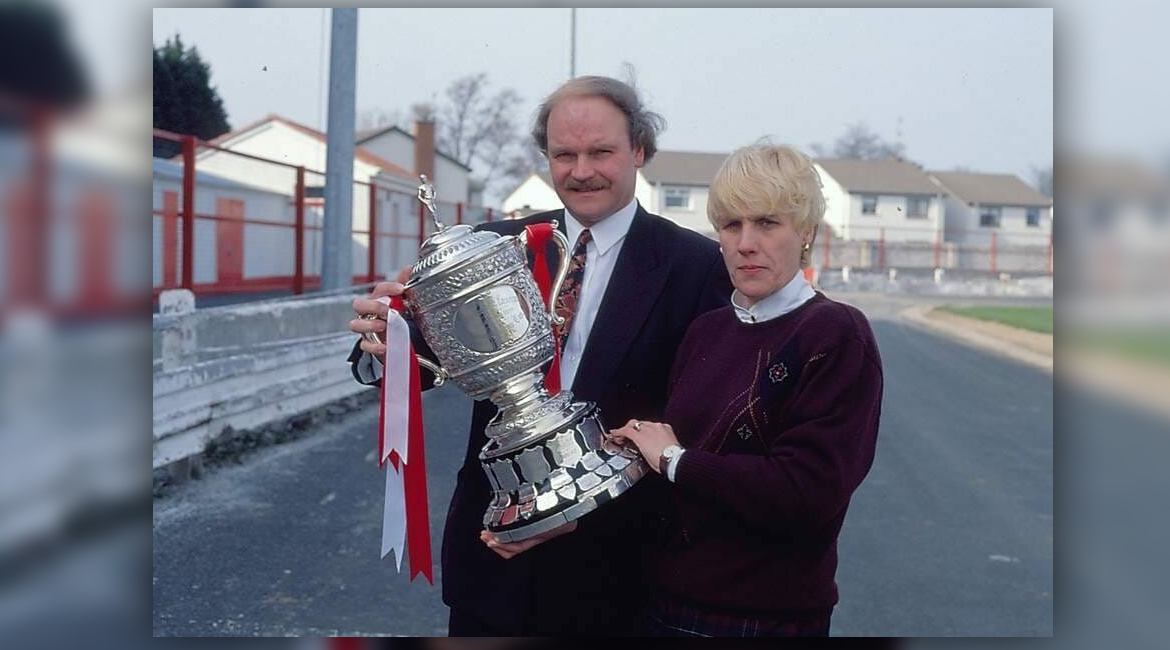 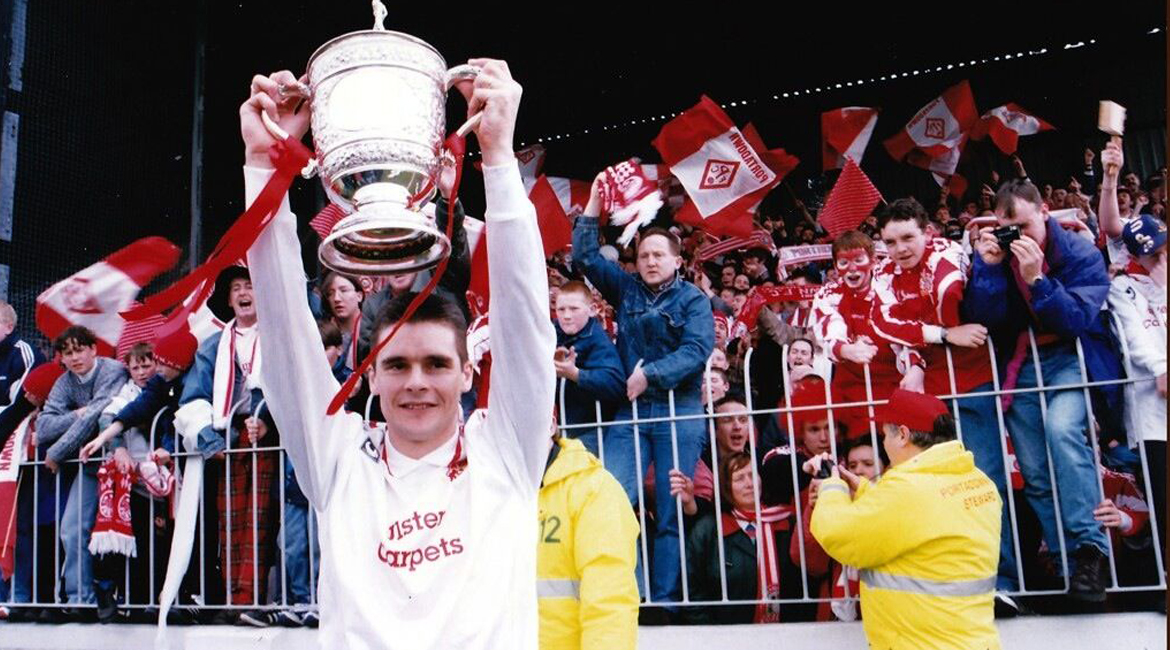 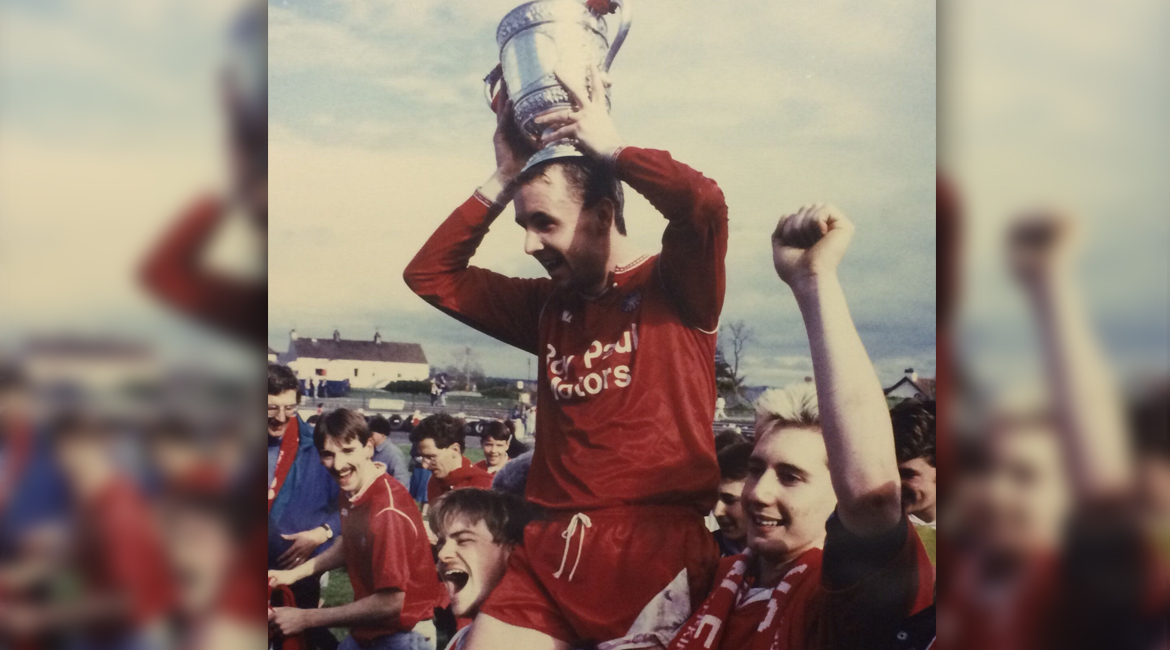 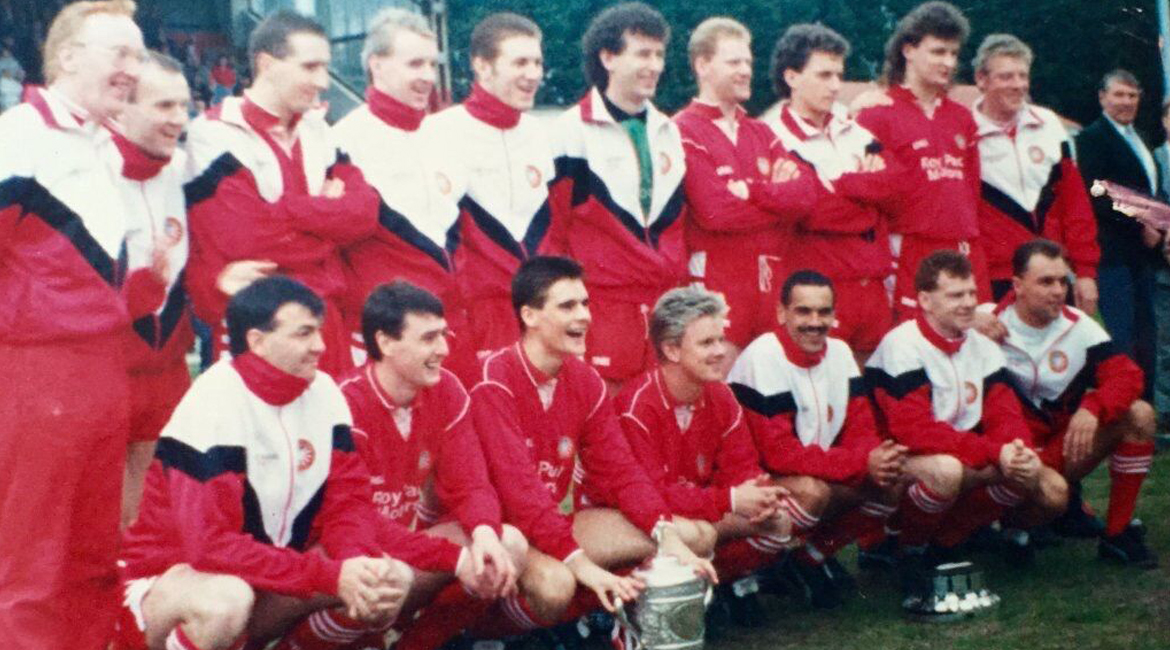 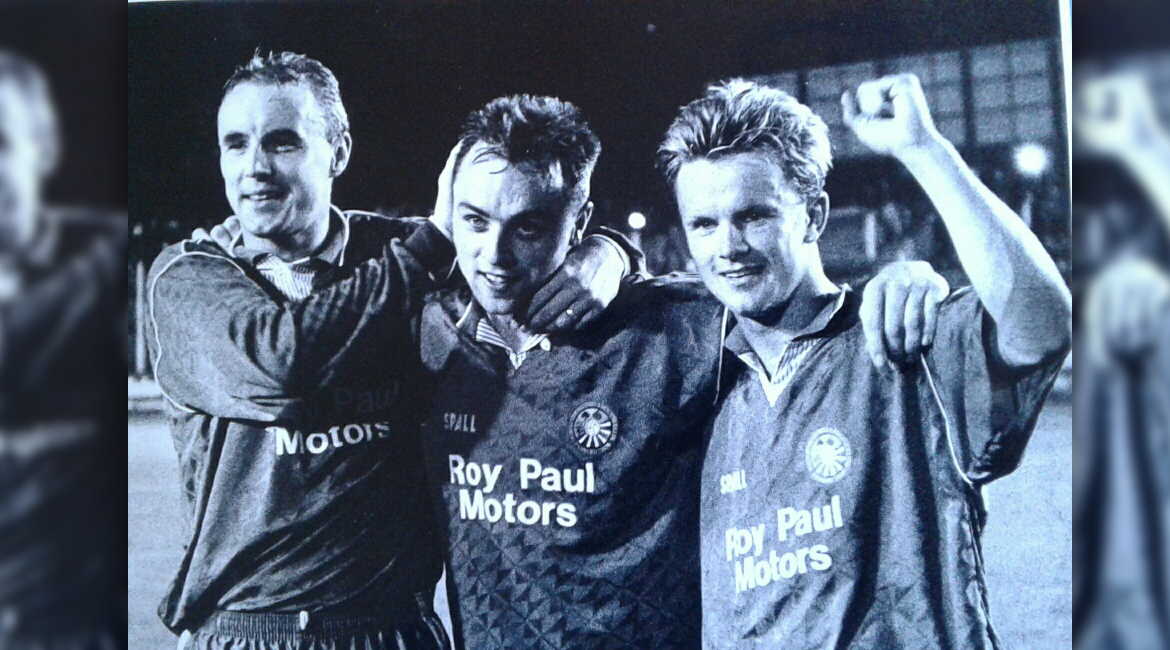 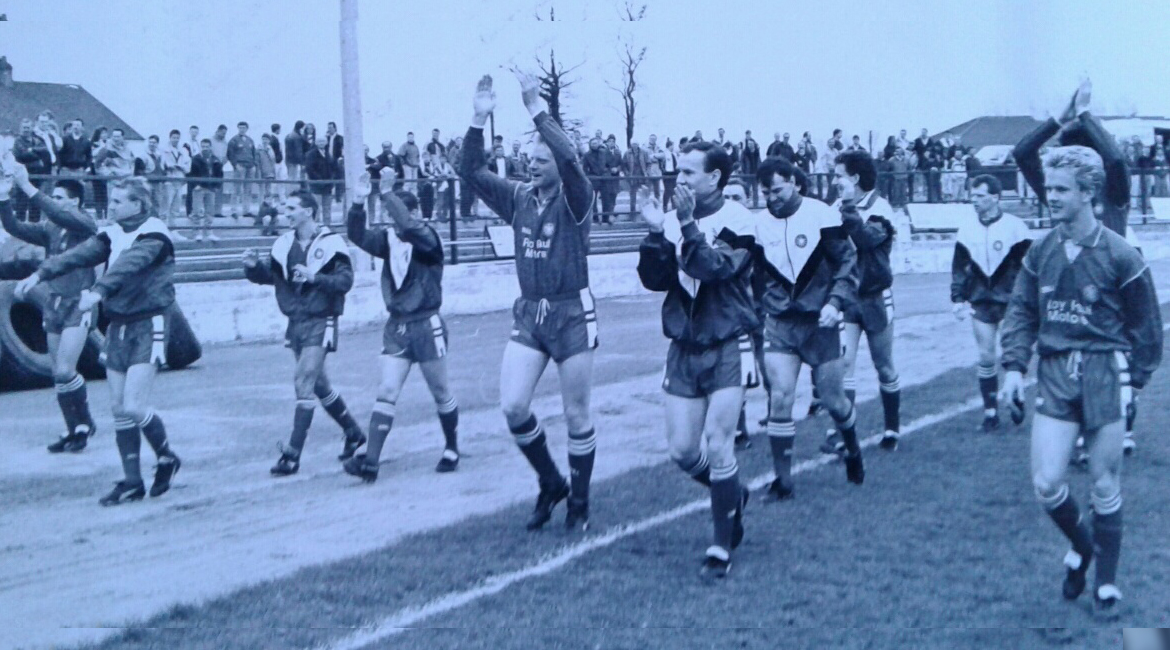 1990
First League Title Win
The club in the 1989–90 season finally broke the famed "Gypsy Curse" at Shamrock Park when, after coming so close so many times in the past, the club finally won the Irish League, and in the final match there was a pitch invasion by Ports fans, who were acting in disbelief at what had just happened that they had finally done it after coming so painfully close so many times.
1924
Portadown Joins the Irish League
In August 1924, Portadown played their first senior game; the opponents that day were Glentoran. The first Irish League game played at Shamrock Park was against the champions Queens Island in a game that finished 0–0.
1887
Portadown Football Club was founded
In 1887, the Mid Ulster Football Association was established, and in Portadown, a young group of men set about creating a football club to participate in the Mid-Ulster Cup.